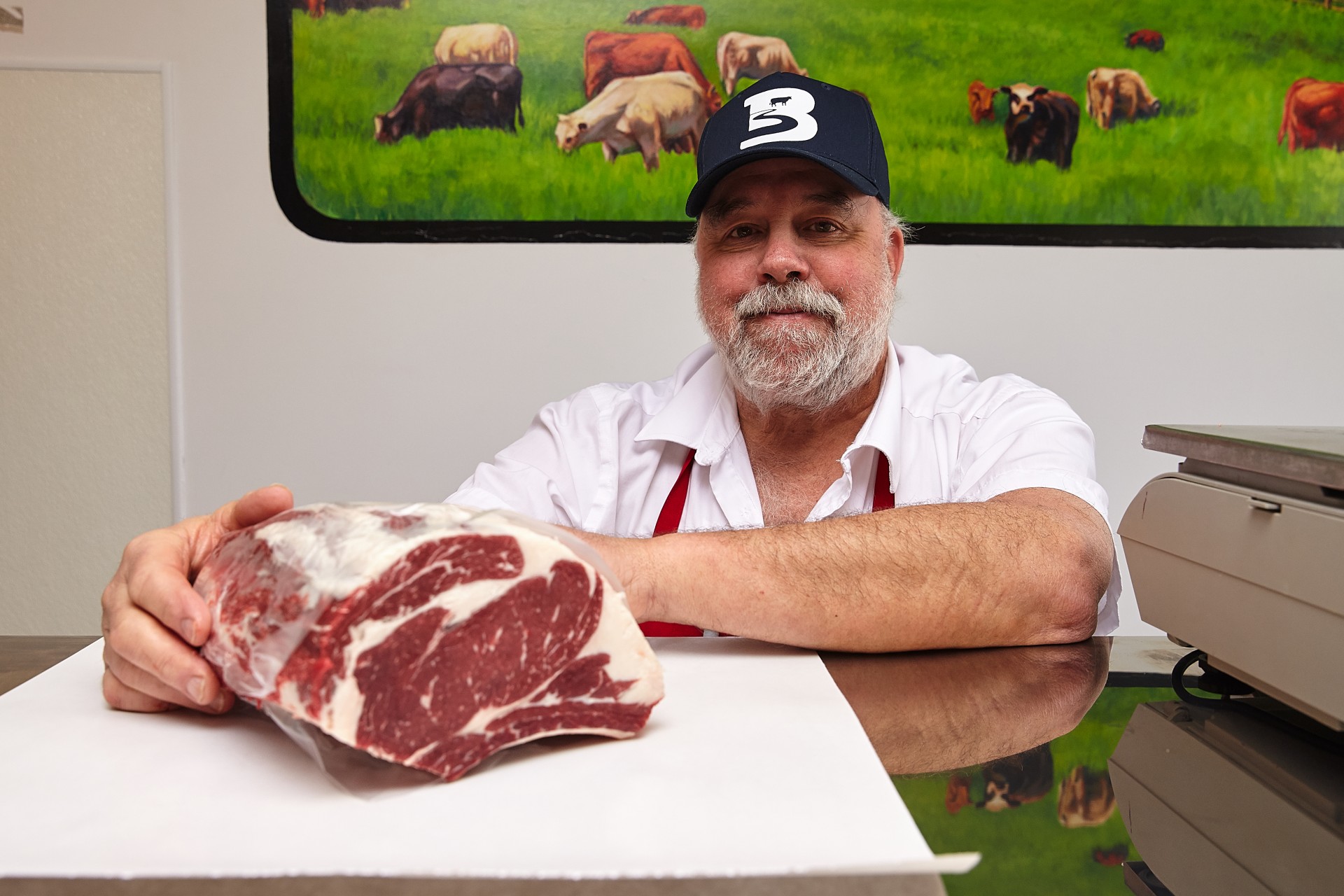 “Bigger and better” Taco Fest returns for a second helping

A butchery, cafe, bakery, grocery, and food truck rolled into one, Bluescreek Farm Meats is one of Central Ohio’s oldest family-owned farms. Once a single stand in Columbus’ North Market, Bluescreek Farm Meats Market now occupies a thriving space on US Rt. 42 just north of Plain City. The farm itself, just north of Marysville, raises 200 acres of hay, wheat, rye, soybeans, and 200 to 300 head of livestock.

Cheryl and David Smith, co-owners of Bluescreek Farms, had have been farming their whole lives, but they had to weather some difficult financial times during the 1980s when their farm was sold back to the lending institution. They stripped the property of anything of value to help with the down payment. They began to work with a new breed of cattle, the Belgian Blue, and selling it as freezer meat. In the process, the Smiths found out not only about a consumer demand for fresh cuts of raw meat, but also about the North Market, which had a vacant meat store spot available.

“The process of getting into the North Market—being interviewed by the merchant board—was a very intense and intimidating process. They had us second guessing and questioning our capabilities, if we were good enough to be in there,” said David.

Undaunted, Cheryl and David passed inspection and literally set up shop for an adventure that would see them through the next quarter of a century. Although Bluescreek has since left their North Market location, they’ve found retail freedom in their Plain City location and even jumped on the food truck trend with the addition of their B’raisin Beasts Food Truck. Stock & Barrel checked in at Bluescreek Farm with Manager Jamie Smith-Johnson, Cheryl and David’s daughter, for a more pastoral, yet just as busy, view of Central Ohio.

S&B: What is the main driving philosophy of Bluescreek Farm?
JSJ: I think our biggest driving philosophy in the beginning was about providing humanely-raised, quality meats that were grown hormone-and antibiotic-free. And focusing on quality and customer service are still very important to us. We still have [that] same driving force, but it’s much bigger than that now. Now it’s also about the individual families that we see on a weekly or monthly basis that rely on us the way we couldn’t have imagined when we first opened up. Some of them have food sensitivities and have a very difficult time finding food that doesn’t make them sick. Others have told us that our meat tastes like meat “used to taste when they were a kid.”

What animals do you have? What products do you make?

We have cattle, lambs, goats and hogs. We have also raised turkeys but, we love the turkey we get from Bowman and Landes. We like having the turkeys as guard animals for fun more than anything. We make a wide variety of products. Not just your basic cuts of meat. [Smith-Johnson proceeds to list off a laundry list of menu items such as meatballs, burgers, and sausages.] Oh the list could go on forever I feel like. With our location here in Plain City we also have the flexibility to create more than we ever did at our previous location. With our baker making crust from scratch (with lard) we make a Classic Apple Pie, Apple Bacon Bourbon Pie and Peach Pie. We have also started making Pot Pies that have been keeping us VERY busy. We now do Beef, Lamb, Turkey and Chicken Pot Pies (regular 9” size and individual size). Our baker also makes things like Sausage Gravy (regular or gluten-free), a variety of cookies, muffins, bread, buns and cheesecakes!

Walk me through what a typical day or week looks like on the farm.

Dealing with the weather is the number one factor that decides what is going to be taking place on any given day. On a farm, you’re ALWAYS on call, 24 hours a day. You never know when or what is going to happen. Cody, my brother, works on the farm full time and is there basically every day. My dad is our main butcher here at the store and is also on the farm. My Aunt Mary Ellen also helps out on the farm daily and helps us out in the evenings at the market. She didn’t realize that when she retired she would be working so much!

Working with plants and animals means you often deal with unpredictability. What were some times when things went totally sideways? How did you recover?

Yes, working with mother nature; plants and animals, can absolutely have some unpredictability. When I was growing up it was like clock work that if there was a major holiday we had animals being born. It was like they watched the calendar and waited sometimes. We try not to put all of our eggs in one basket. And if we do put all of our eggs in one basket we have always been fighters about it. Opening up here in Plain City was the largest investment that had the potential to go sideways that we have ever taken. Getting things ready to open here was very stressful for us as a family because we knew how important it was for this location to be a success. The first few weeks here in Plain City we were all putting in 100 hour weeks. We had to
make several changes quickly to ensure that we didn’t kill ourselves.

What do you think about urban farming?

I think urban farming is fantastic! The more people who know and understand where food comes from the better! Many people, especially those who are not around it all of the time, don’t make the connection that carrots are grown in the ground or on that same note that meat comes from an animal. It’s not made in a factory. Understanding and respecting where your food comes from, be it from the ground or from an animal, is important.

Bluescreek farm is located at 8120 US 42, Plain City, Ohio. Visit them online at bluescreekfarmmeats.com