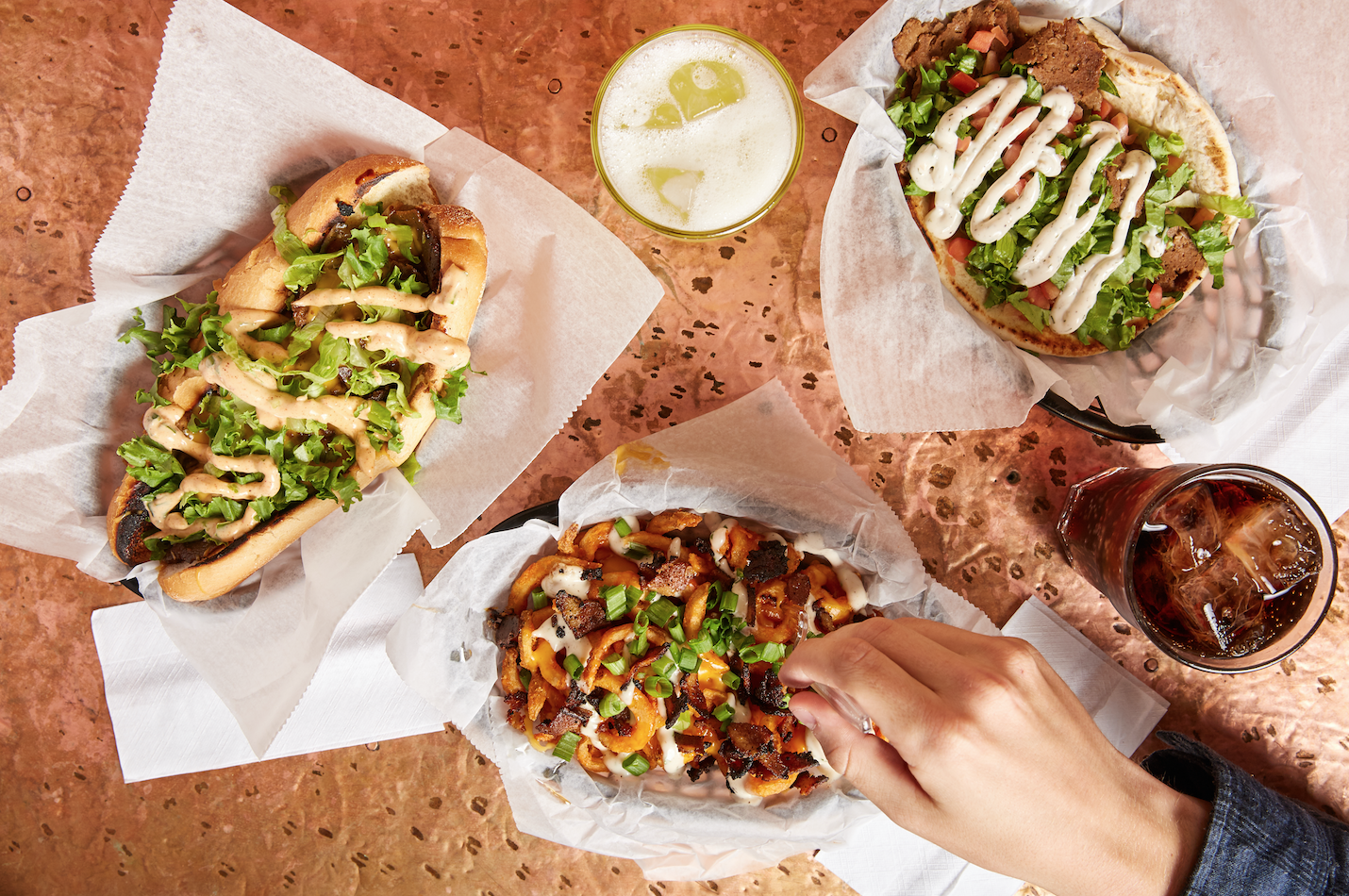 Juicy and tender, full of protein, and cut perfectly on a deli slicer—these are not the typical descriptions you think of when talking about a vegan eatery. Usually, what comes to mind are green plates featuring an array of vegetables, or some sort of play on tofu to resemble a meat counterpart. And while tofu and tempeh have carved out an audience of eaters for various dishes, a new wheat gluten-based alternative is on the market and it’s giving those two previous options a run for their money. It’s seitan, and a new vegan food truck, Seitan’s Realm, is changing the way meat-eaters and vegans alike go about getting their protein.

For the record, yes, you read that correctly. It’s Seitan’s Realm, not Satan. And the offerings here should be sinful considering how delicious they are. Options include a Philly cheesesteak complete with vegan cheese sauce, onions, and peppers on a soft hoagie, or a gyro piled high with lettuce, tomato, and an addictive tzatziki sauce in a fresh pita. And the loaded curly fries? Don’t even get me started. While all these dishes are vegan and made with fresh ingredients, the true star of the meal is the seitan.

What is seitan? I thought you’d never ask. Seitan comes from China. A loaf of seitan is made by laboriously kneading wheat our and water together to form a dough. The starch is then rinsed away, leaving behind a stringy mass of gluten which can then be flavored and cooked to your liking. And if it’s up to Kevin Ridenbaugh, co-founder of Seitan’s Realm, he’s making vegan bites that will entice even the staunchest of meat eaters with tempting recreations of gyro lamb meat, cheesesteak steak, and even smoky bacon with chewy and crispy bits.

The food truck started for Kevin, and his wife and co- founder Amber, in mid-May 2019 where they quickly found success in the parking lot at Virtue Salon in Clintonville. But, it didn’t all begin there for Kevin and Amber. Three years prior to starting the food truck, Kevin said he began experimenting with recipes featuring seitan. Through a trial-and-error process, he said he finally perfected his craft and his first “a-ha!” moment came after making his now popular gyro.

Since then, the menu has expanded with the aforementioned cheesesteak, but also a take on Arby’s beef n’ cheddar, as well as a reuben complete with vegan thousand island dressing and sauerkraut.

“We’ve got things to about as good as we can possibly get it,” Kevin explained. “We can always tweak a couple things here and there, but for the most part I’m really proud of everything we’re putting out.”

And rightfully so. A cursory glance at the Instagram page and website shows just how well the sandwiches stack up to their meat inspiration. The sandwiches are large, stacked high, and topped with all the fixings we know and love on these dishes. While the flavor is the most important part, getting people to break away from their traditional meat-eating habits is an uphill battle, and having eye- catching dishes helps in the long-run.

“It’s like people look at our menu and they see gyros or reubens and they know what that is, so they order it without knowing that we’re vegan,” Kevin said. “We toyed back and forth on if we should actually put that we are vegan on [the truck].” The verdict was to skip the label, and let people’s tastes, rather than their “preconceived notions” of vegan food guide them instead.

A large reason for this decision is because what Kevin and Amber ate before going vegan. He said his diet mostly consisted of what he calls junk food and making the switch to vegan was difficult since he couldn’t chow down on some of his favorite foods. He was craving things like gyros, but didn’t have anywhere to go to get such a dish. So he did what he could: started making it on his own.

“It took me about three years to really perfect the menu to have what we have now,” Kevin explained. “What we’re putting out now is the best possible thing we can put out.”

Now, Seitan’s Realm stays busy with its food truck. From continuing to grow its popularity at Virtue Salon, serving up vegan bites on Thursdays at Nocterra Brewing, and most recently becoming the follow up to Woodhouse Vegan at Oddfellows on Monday, business is boomin’. And the connection to Oddfellows is largely thanks to Woodhouse Vegan. Now with Woodhouse finalizing its opening date at the new brick-and-mortar location, the owners made sure that the vegan Mondays lived on at the Short North bar.

“It was kind of funny, I got a call from Matt, and he was telling me that Woodhouse was moving out and they wanted to do a pop-up and I was just like, ‘Dude, there’s no way Oddfellows is calling! We’ve only been doing this for a month.’ ” Kevin recalled.

This support is representative of the larger vegan community growing in the city. It isn’t a competition or a race to the top; rather it’s a chance to give a new business opportunity and make sure great vegan food gets out to hungry people and spreading that plant-based love.

“Without their support, I don’t know if we’d be here right now,” Kevin said.

For Kevin and others in the vegan community, it’s a bigger picture mindset.

“We don’t really look at each other like competition,” Kevin explained. “It’s like, look—the more people we can get to eat this stuff, the more sales everybody will have. We’re not going to be cutthroat, you know? It’s like let’s do this thing together.”

Seitan’s Realm can be found at Oddfellow’s Liquor Bar on Mondays from 5 p.m. to 9 p.m. To find out where the food truck will be next, follow it on Instagram at @seitansrealm, or the website at seitansrealm.com.