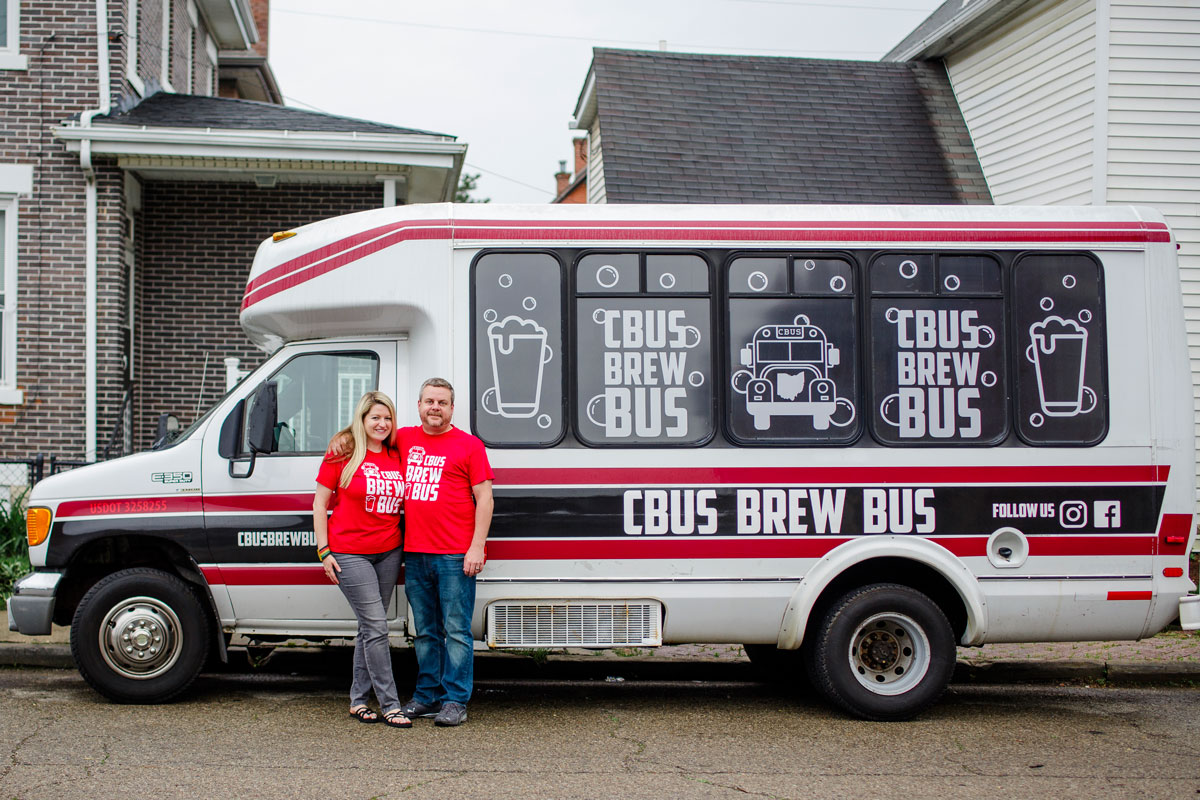 Take a Hike: 5 parks to take a scenic seasonal stroll

So many breweries, so little time, so few volunteers to drive your tipsy tush around, right? Wrong! Columbus, I’d like you to meet CBus Brew Bus: a brewery party bus tour that offers a new and refreshingly different way for curious hop heads to experience the local craft beer scene.

It was a despairingly shitty day in Central Ohio when our very strange-looking Uber pulled up to the (614) Media Group office. We all raced to the front to catch a glimpse, giggling at the thought of our impending adventure.

Our tour was private, meaning we had the whole bus to ourselves and were able to customize the pickup and dropoff locations, as well as the destinations. Public tours, on the other hand, are made up of several small groups that meet in the heart of downtown at City Tavern and visit predetermined breweries. (I know what you’re thinking and yes, the AUX cord is up for grabs on both private and public tours.)

Owner Andy Bachman and his wife/tour guide extraordinaire/HBIC Jess greeted us at the door as we took our seats. The inside was decked out with paintings of Godzilla wearing a shirt reading “I Heart Local Beer” and Godzilla wearing a Block “O” tee—both raising foaming pints of beer, naturally. Unlike a real school bus where Kenny from 5C won’t stop kicking the back of your seat, CBus Brew Bus chairs face inward to keep conversations flowing right along with the brews. Between each seat is a cup holder that contained a 6.75-ounce sample glass that we would use to sample three unique beers at each of our three destinations.

Between curiosities of our careers and a mutual interest in beer, we hit it off with both Jess and Andy immediately—a perk of the service before we even shifted into drive.

“It’s a great way to meet other people who may already enjoy craft beer,” Andy said of the tour. “You might even be somebody new to town or visiting from out of town and it’s a great way to acclimate yourself to the Columbus culture.”

We hustled in to avoid the rain and were met by an expecting Frank Shoults, Zaftig Taproom Manager. One of the most special qualities of CBus Brew Bus is the personalized experience you receive at every checkpoint. There were other bar guests upon our arrival, but Shoults gave us his undivided attention as he explained the beers, and waited patiently as we decided on our individual flights of three.

I’m an IPA girl through and through, but I wanted to use this excursion to expand my hop horizons. I went with the Big Barleywine (14% ABV), Nuts For You Peanut Butter Stout (8% ABV) and Juicy Lucy IPA (7% ABV) because, well, old habits die hard.

While Andy understands that beer isn’t everyone’s thing, he’s confident the CBus Brew Bus can provide an experience even the most inexperienced beer drinker can appreciate.

“Through this tour, you get to sample nine different types of beer and there’s usually something within that range that people will grab onto,” he assured. “There’s something for everybody. Don’t fear the beer!”

We sipped and gossiped until Shoults came over and invited us on a tour of the Zaftig brewing facility. We learned about cultures, yeast, the canning process, and the importance of having a CFO (chief feline officer—follow Hops on Instagram at @zaftighops).

Jess popped the top of our crowler of Sweet Lucy and officially christened our trip with its first road beers before we were even clear of the Zaftig parking lot. You can throw a rock from pretty much anywhere in Columbus and hit a drinking establishment, but there’s just something about sipping on an ice-cold IPA with your buddies while doing 65 down I-71 South. Beer tastes better while you’re doing a mile a minute. Amirite?

It was becoming crystal clear that the three seemingly small samples at each brewery + to-go beers between stops were going to add up quickly.

Like at Zaftig, our bartender was also ready and waiting for us with an ice-cold pitcher when we tipsily traipsed into Parsons North. Mulberry Saison (7% ABV), American Stout (5% ABV), and Grapefruit Wheat (6% ABV) were the three beers we were treated to—none of which I would have ordered on my own accord, but were all brews I’d drink again.

Andy, now retired from Columbus City Schools, was first introduced to craft beer during his residency in Boulder, CO and, more specifically, his experience with Boulder Beer Company about 20 years ago. Experimenting with different craft beers has been a muse of mine for about five years now. Andy, however, is a pioneer of sorts.

“From that point on, I was pretty anti-domestic,” Andy said laughingly. But, he returned to Ohio in the mid-90s only to discover how far, far behind we were in the craft beer scene. Andy became a teacher but clung to his passion for beer. Without the capital for a taproom or enough knowledge of the process to become a brewer himself, Andy landed on the idea for the CBus Brew Bus.

The trip from stop 2 to stop 3 is what Andy calls the “sweet spot.” What he means is that the riders are experiencing peak fun. I couldn’t agree more. Our small, but lively, group of (614) staffers and Jess—who was going beer sample for beer sample with us—drank the rest of our Sweet Lucy crowler under-the-light of the green LEDs that lined the ceiling of the bus, and talked and laughed at unnecessarily high volumes until we rolled to a stop at our final destination.

At Platform, I tried the Seltzer Project: Tangerine-Grapefruit Hard Seltzer (5% ABV) and I loved it. Will it replace my Black Cherry White Claws this summer? Stay tuned. I also had the Mello Hello IPA – Brut (5.4% ABV) and loved it, also.

By this point, at our third brewery, it was crystal clear that the three seemingly small samples at each brewery plus to-go beer between stops had really added up—tipsy would’ve been an understated adjective for our crew. But, we got way more than a Friday morning hangover out of the deal. Jess was our new favorite drinking buddy, we fell in love with several new brews we may have never taken a chance on otherwise, we learned the ins and outs of Zaftig’s brewing process, and we bonded with each other in a way that few coworkers get to experience.

What will your Brew Bus adventure hold?

For more information and to schedule your next trip, visit cbusbrewbus.com.