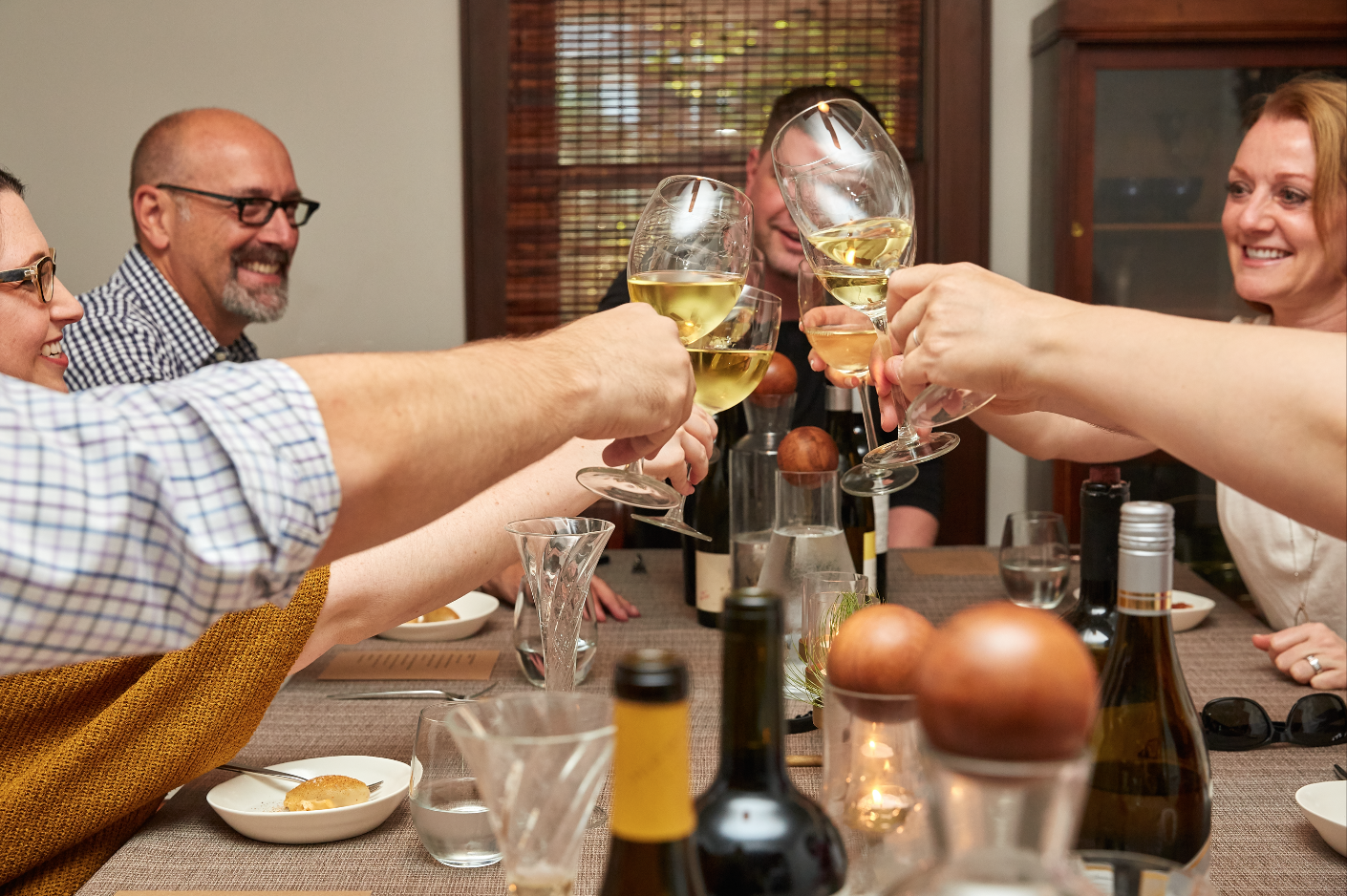 Though it doesn’t require the same ritualistic initiation as Eyes Wide Shut, Roys Avenue Supperclub, a private monthly tasting hosted at the home of Columbus chef Andrew Smith, is an affair where both indulgence and experience come together. For Smith, experience is something he often mentions when speaking about his creations.

After attending culinary school in Portland, Oregon, Smith relocated to Columbus in 2010, crafting meals at The Rossi for five years, and partially opening Rockmill Tavern along with the now-defunct Salt & Pine. Recently returning to The Rossi to manage quality control, Smith spontaneously began Roys Avenue Supperclub with the aid of his wife, Devoney Mills.

“It’s really fun being able to put an elaborate dinner together and pull that off with her help, because there’s no way I’d be able to do any of it without her,” Smith says of his partnership with Mills. “It’s very underground, word-of-mouth. We do have an Instagram page, but that’s the extent of it.”

The Instagram page for Roys Supperclub is a detailed visual portal into dishes featured at past and upcoming dinners, along with the curation of menus each month. At a glance, viewers can find a whipped dollop of white chocolate ice cream, dusted by toasted buckwheat and glazed with bay oil, along with a thumb- sized short rib, sprinkled with molasses, garlic lemon and macadamia. Just as you begin to salivate, a nine-course menu may catch your eye, one specifically made with a certain bird in mind.

“One of the things with that dinner is, we wanted to showcase duck in a way that most people aren’t used to eating it. Just because we were using duck, it doesn’t mean that that was the focal point of each dish,” Smith says. “We wanted to be able to highlight a specific ingredient with the duck instead of highlighting the duck with another ingredient. We tried to utilize everything, from the liver, to the fat, to the skin, to the legs, to the breasts, everything was a part of it.”

Constantly forward-thinking, Smith and Mills assess their relationships with other food resources, utilizing the farm-to-table method, and updating guests on what they’ll be served prior to arrival. It’s a build up of communication that eventually leads to the execution of both nourishment and connectivity.

“Menus are generally written three to four weeks out, and they’re definitely inspired by as many local farmers or people who are raising whatever animal we use,” Smith says. “I think that’s where the biggest part of where we get our ingredients is trying to work with people who can provide the highest quality that we can find locally.”

Held in Smith and Mills’ home, Roys Avenue Supperclub allows not only room for the enjoyment of culinary arts, but the conjuring of discussions between guests who may have been previously unfamiliar.

“The two of us, we have a lot of acquaintances and people that we’re more than comfortable having in our home. Keeping it word-of-mouth and small, it allows us to really provide a comfortable atmosphere for people who want to come and participate in our club,” Smith says. “If someone were to just come in randomly, our home is very inviting and it’s a very chill, laid-back atmosphere. We have people that leave the dinner at the end of the night and they didn’t know anybody else there and they feel like they’ve just had dinner with people they’ve known forever.”

Thoughtfully garnishing dishes that are able to be savored within a few bites, Smith also foresees eventually holding a fully-vegetarian or pescatarian dinner.

With menus being presented in invitation form, for now, the minds behind Roys Avenue Supperclub are only taking allergies into consideration, not wanting to restrict their creativity.

“I really feel like my approach to food, I would like to say, changes as I change. I think that I’ve learned more about the term ‘less is more’ than I ever thought I knew,” Smith says. “The more we do these dinners, the more we’re able to accomplish that in a more efficient way than before. I don’t know if that makes sense or not, but I think we’re getting better and faster with coming up with ideas, because we don’t have any restraints. My wife and I love each other very much, so it really helps in the situation. It provides a really amazing thought process between the two of us.”

More experimental than practical, Smith prides Roys Avenue Supperclub for its innovation and reliability, transforming the dinner table into a meeting place where ideas are interwoven. “We’re trying to provide an experience that is unique to Columbus, not for us, but for the guests. We want them to leave feeling like they’ve had a different experience, like it’s something they’re not used

to having in their city,” Andrew says. “We want them to have made friends with people that were there, we want them to talk about food and keep that conversation going, and hopefully it can spark some creativity in them.”

To see the latest creations from Andrew Smith, visit roys_ave_supperclub on Instagram.