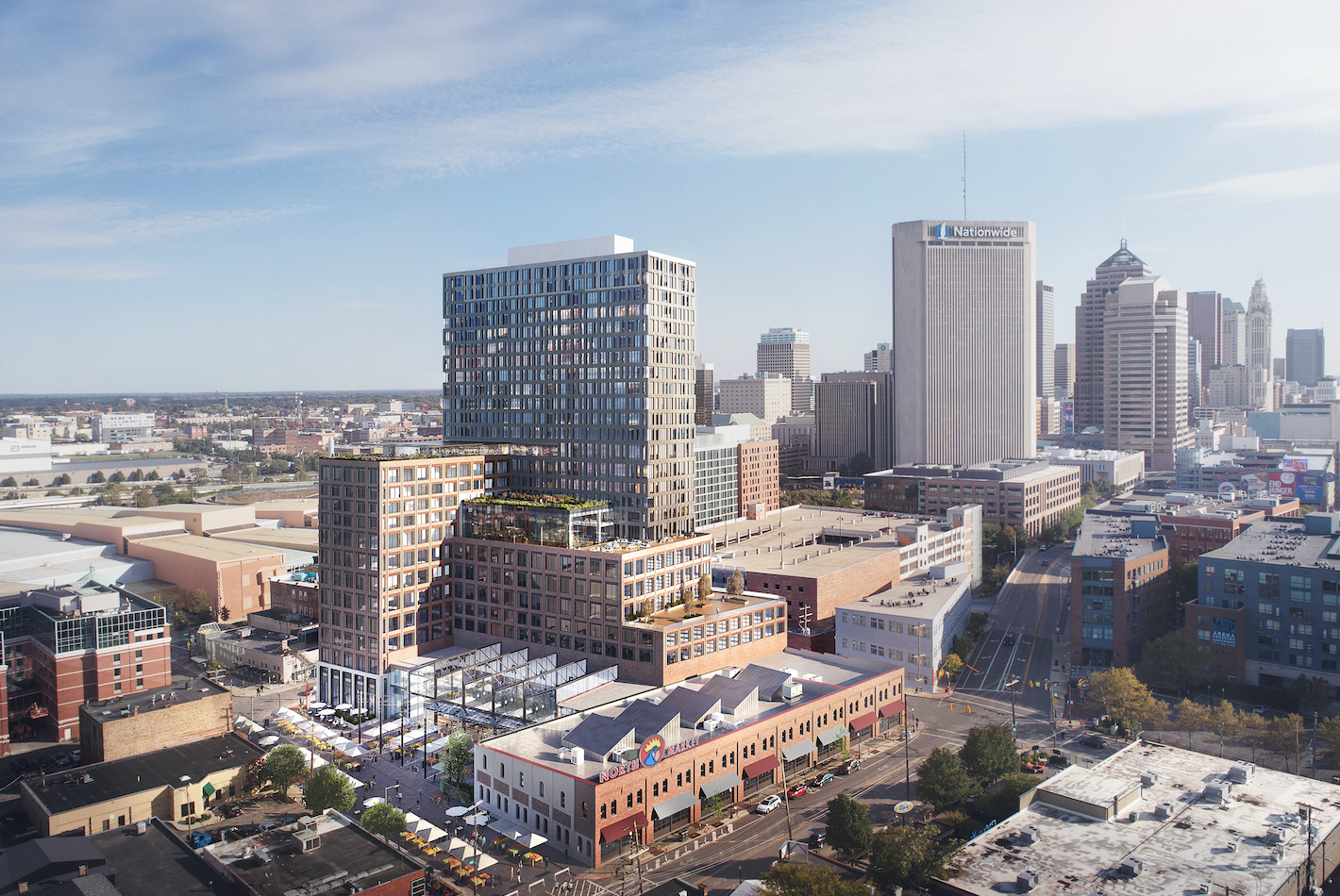 On a long enough timeline, everything this side of the Atlantic seems shiny and new by relative comparison. Public markets elsewhere in the world mostly measure their history in centuries instead of decades. And even their more recent descendants, like London’s Camden Market, feature more than 1,000 vendors and top 100,000 visitors on an average weekend.

But is authenticity lost in all that bustle? Can you really claim to be local if you practically require your own zip code?

That’s the inherent challenge in preserving and expanding any public market, keeping things literally and figuratively fresh without losing the culture and community that customers have come to expect. And that’s why planning for the new North Market Tower has generated both anticipation and apprehension in a neighborhood that’s seen a lot of change lately, not all of it welcome.

“I grew up in Columbus until I was 18, so I remember the Quonset hut. When I moved back, we were in this building. I started coming here a lot just like when I was a kid,” recalled Rick Harrison Wolfe, Executive Director of the North Market. Despite zero nonprofit experience, it was his vision of the future that earned him the position from among more than 400 applicants for the role. “Expansion wasn’t part of my presentation, but it was already on my mind. The more I considered the space and the experience, I knew there were opportunities that could only come with growth, and there was nowhere to go but up.”

Wolfe’s résumé is revealing and rolling, following a career in fashion that took him from Chicago to San Francisco and Los Angeles before heading back to Columbus. Upon returning to his hometown, and a brief reinvention in the local food truck scene, his retail insights and close-to-the-bricks work ethic comfortably converged in the food-centric destination constantly adapting to new trends and tastes.

“When you look back to the original market of the late 1800s, it’s where people came for provisions, for everything. The North Market at the turn of the century had a quiltmaker and a blacksmith. It reflected the role of public markets of the era,” he explained. “I think we need to think about the other types of retail we can bring in. I love that we focus on food, and complements for food. It says on our door that we’re, ‘local, fresh, authentic.’ There are a lot of businesses in Columbus that are local, fresh, and authentic that aren’t just food.”

Beyond the expansion of vendor space, the mix of offices, residences, and a hotel—with parking to support all of them—is enough public space to present and restore enumerable opportunities. A vital public market requires ongoing change, but that constant churn can be unnerving for patrons and prospective tenants. When square footage is always scarce, something has to go to make room for something new. Space that became home to a highly-popular purveyor of poultry used to serve as a quirky catering and event location. I actually have friends who were married there, and now when folks see their wedding photos, everyone asks why they decided to exchange vows at Hot Chicken Takeover. Wolfe knew capacity and critical mass would always be at odds without a radical solution that created both.

“Density and flexibility, having people who live and work in North Market Tower, is crucial for our merchants and our future. You have to evolve to remain relevant,” he noted, explaining that earlier designs have changed, but still reflect the original priorities. “Projects like these always evolve, and should, just like the market itself. A rendering is just a rendering until it’s a reality.”

Wolfe’s earlier career has also had a more subtle hand in the growth of the North Market, particularly the travel it afforded and his experiences with public markets in the US and abroad. California-inspired elements from Oxbow Public Market in Napa and Grand Central Market in Los Angeles, which has seen a similar resurgence in recent years, have been given a Midwest makeover that suits Central Ohio.

“I used to travel to Barcelona twice a year, which has one of the strongest public market systems in the world. With 35 markets, anywhere in Barcelona is only a 15-minute walk from the nearest public market,” he explained. “I’ve been to Borough Market in London, which is more than 1,000 years old, and it’s still where you get the best taste of the city.”

In fact, the North Market is for many visitors their first taste of our city as well, conveniently located across the street from the Greater Columbus Convention Center. Recent attendees from the American Society of Association Executives selected Columbus for their annual conference for several reasons. But the Short North, and the North Market in particular, make quite a first impression on guests from across the country. It’s why Joe DeLoss, founder of Hot Chicken Takeover, calls the North Market, “the front door to Columbus.” Those fond memories may mean millions. Experience Columbus predicts if even a fraction of those organizations represented by ASAE bring their own conferences to Central Ohio, it could create half a billion dollars in local economic impact over the next decade.

“Deals like this between the city and developers are always a negotiation. But Columbus included us in those conversations. We were always in the room, and that doesn’t happen everywhere,” he explained. “You’re going to laugh when I say I got more than I wanted in this project, but it’s true.”

Though talk of the North Market Tower seemed to go silent for nearly a year after it was formally announced, much of that was to accommodate the mandate that the market remain open for the duration of construction. Ongoing development throughout the Short North—from streetscape, sidewalks, and parking improvements—have had their share of fierce critics and retail casualties. The current plan includes 28 stories and a budget approaching $200 million. Even amid a project this complex, Wolfe remains committed to an orderly transition instead of avoidable disruption.

“The cost and construction of the building we’re in right now wasn’t a safe bet at the time either. It was a long shot. There isn’t a public market project like this anywhere in the world, and there hasn’t been an expansion of a public market in the U.S. this big in the past 50 years,” Wolfe noted. “But when you look at projects like the riverfront now, people ask why we didn’t do this years ago. I hope when this project is complete and people see and experience the evolution, they say the same about the North Market.”