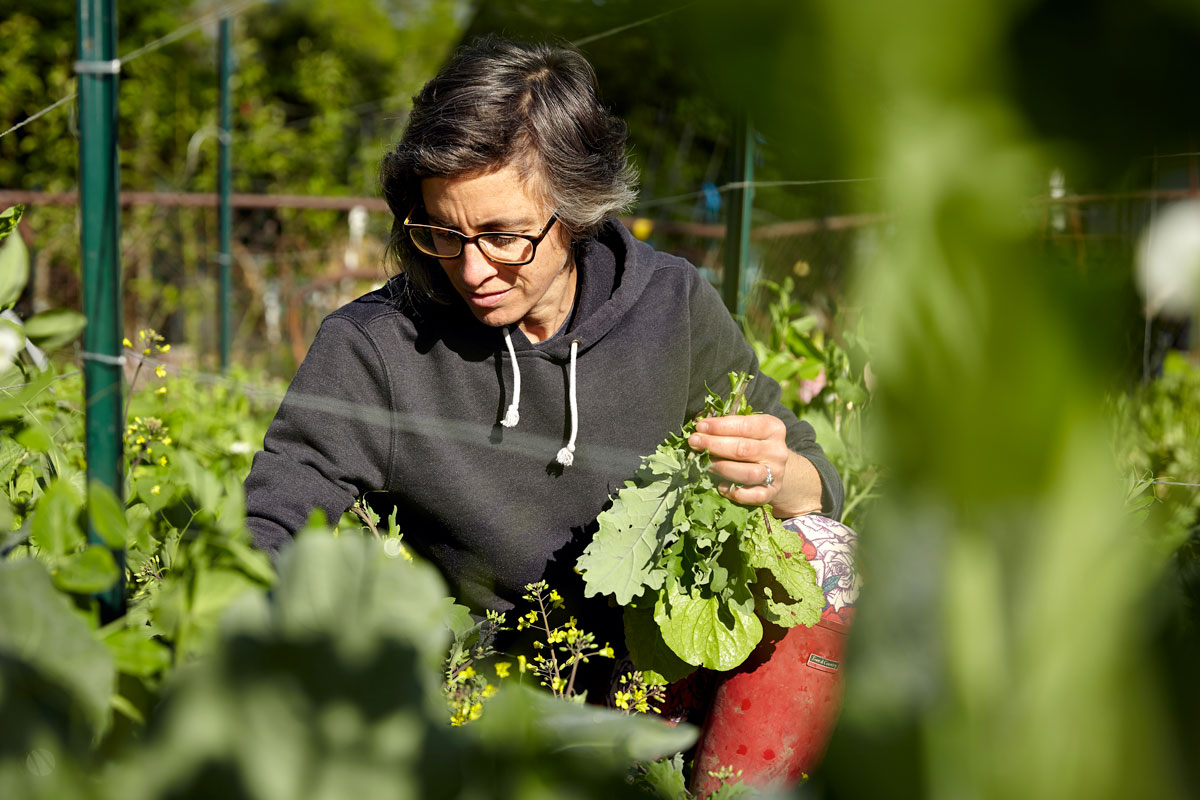 It’s the first hot—really hot—weekend of the summer, and I’m digging 18-inch deep trenches to plant potatoes. I’m layered in sunscreen, soil, and sweat, concentrating on the task at hand. Were this my yard, I’d be concerned this experiment would go nowhere. (Brown thumb that I have, I’ve never been able to accomplish the supposedly simple task of getting an avocado pit to take root in water.) Luckily, this isn’t my property. It belongs to Jodi Kushins. She’s converted the whole yard into a vegetable garden and community-supported agriculture (CSA) project called Over the Fence Urban Farm where a $500 membership and a couple hours of work per week nets subscribers a summer’s worth of fresh produce. Looking at the edible greens popping up all around me, I feel con dent that these potatoes will be just fine. And if I’m right, I’ll have them on my dinner plate before the summer ends.

In 2013, Kushins and her husband were living in a house in Clintonville that his grandparents had once owned, growing summer vegetables in beds in the backyard the way they had once done. While the results were satisfying, it wasn’t enough. Kushins began looking over the fence at the neighbor’s backyard, imagining what they could grow if they had access to that land too. As fate had it, the house went up for sale, and they jumped. Their plan was to start their own CSA on the new land, and bring in the community to share both the work and the rewards.

Kushins said that putting members to work was the traditional CSA model, but that many CSAs no longer do so. After all, it takes time to teach inexperienced gardeners how to do things properly. However, an educator by training, Kushins was up for the challenge. “The sharing and inspiring is just part of who I am and how I’m wired,” she said. Six years into the project, Over the Fence Urban Farm now works with 20 subscribers.

Kushins plans a 22-week season this year. Members can expect everything from spring greens and herbs to summer tomatoes and okra to those potatoes I planted (fingers crossed). Fresh eggs from the farm’s chickens sometimes round out the weekly haul. Most amazing: all of this food is grown on just 2,000 square feet—about 1/20 of an acre.

“I definitely see myself as a successful female farmer in the city,” Kushins said. “There are a lot of women farming right now in Columbus on various scales, and I think it’s really important that we continue to be part of the face of urban farming in Columbus.” Kushins has become an ambassador of sorts for the local food movement in Columbus, hosting visitors of all ages, organizing the Kids Garden Club at the Clintonville Farmers Market, and championing local agriculture to city policymakers.

With seemingly endless dining options that feature “local” foods on their menu, the time is ripe for her work.

Yet, ever the educator, she advises that consumers ask questions, as she has concerns about “greenwashing” in the industry. The term “local” doesn’t always look like Over the Fence—produce essentially grown in a backyard— and while there’s nothing wrong with following a different model, consumers concerned about eating local should understand where their food is coming from so they can make informed choices.

Of course, for the members, it’s about more than food. Member Ryan Hlavin said, “To me, finding local, high-quality food is just as important as contributing to and helping out in my community. Over the Fence gives me the ability to do both.” Member Haley Knotts added that getting an assortment of different vegetables each week has expanded her diet. “One thing I’ve learned is to try many different types of greens, and that radish greens make a delicious pesto.”

Just as Kushins’ small garden eventually grew over the fence, what members can learn from this project extends far beyond the borders of the farm. “We suburban and city dwellers seldom get a material sense of the cycle of seasons, the real material consequence of the change in weather, and increasingly, climate, but people who grow things in a systematic way do get that sense,” member Julian Halliday said.

And of course, there’s something special about preparing food you’ve helped to grow. “I think the stories of where our food comes from is like a spice that adds flavor to what we’re eating,” Kushins said.

If that’s the case, the potatoes that I’ll be cooking later this summer will be anything but bland.