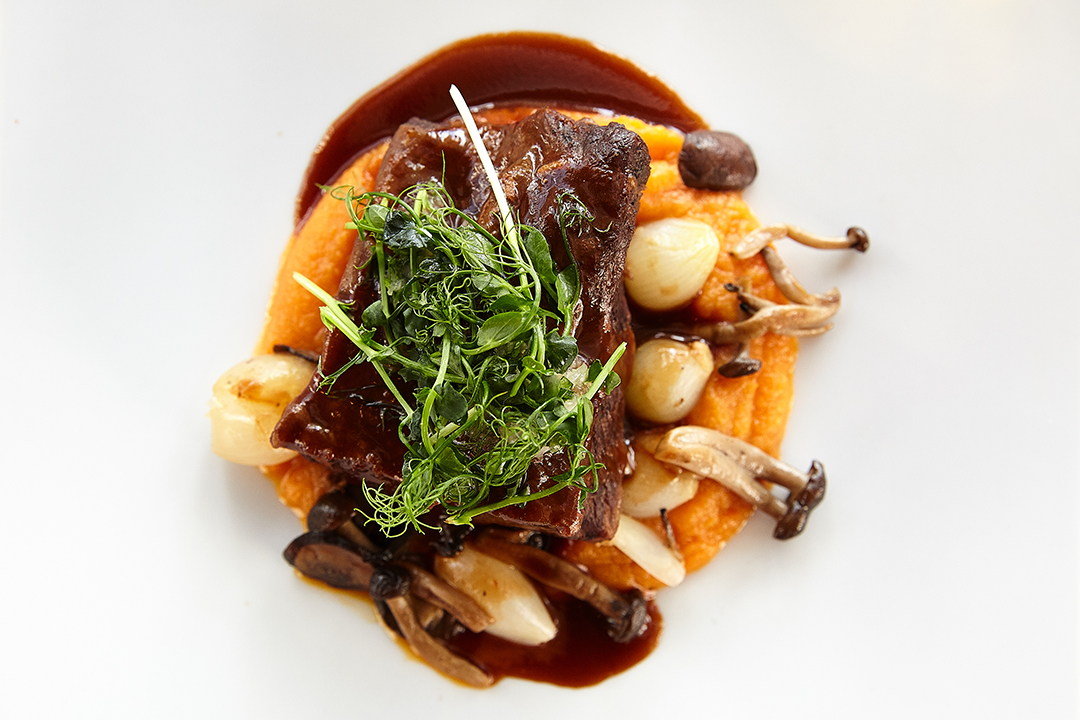 I felt a moment of guilt when the $16 Hen Quarter house burger was placed in front of me and I immediately thought of fast food. It was the double patty that did it. At higher-end restaurants, I’m used to a thick single patty that’s mostly left to speak for itself. Hen Quarter’s burger, by contrast, stacks two four ounce patties atop one another and covers both with gooey American cheese and classic fixings reminiscent of a drive-thru.

My first bite only made the association stronger. General Manager Alison Armstrong then explained that she’d challenged Executive Chef Cullen Flinn to reinterpret the In-N-Out Burger for their menu. Suddenly, I understood. I was not eating fast food, but rather a stellar tribute to it. And it was delightful.

Serving a southern-style menu, Hen Quarter opened in Dublin’s Bridge Park this past October—the result of a “gentleman’s bet” between owner Ron Jordan and his friend Warren Thompson, who owns three DC-area restaurants by the same name.

“Ron was at the grand opening [for one of Thompson’s DC restaurants] and said, ‘I bet you I can do it better,’ ” Armstrong explained.

The challenge was quickly accepted.

The two men partnered closely to prepare for the Columbus opening. Armstrong and other staff spent some time working in Thompson’s east coast kitchens to get a feel for the concept, while at the same time coming up with ideas about how to adapt Hen Quarter for the Columbus market.

“We had full autonomy—this is not a franchise—we’re a licensee of the brand. So the name is the same, and other than that it is quite different,” she said.

The wine program at Dublin’s Hen Quarter sets it apart not only from its peers out east, but also from other restaurants in Columbus. Armstrong, a certified sommelier, assembled a collection of over 700 bottles of wine that are stored in temperature-controlled glass cases throughout the restaurant.

The rare offerings include a 2015 Sassicaia, rated the best wine in the world by Wine Spectator in 2018.

“I believe we are the only restaurant in Ohio, let alone Columbus, that has two Sassicaia bottles,” Armstrong said.

No need to be intimidated if you, like me, are learning about this vintage for the first time. Above all, Hen Quarter aims to keep it fun and make sure everyone feels welcome. Chef Flinn’s approachable food menu all but assures this. The dinner options include pork chops, shrimp and grits, and fried chicken (served with or without a waffle). Mac and cheese and collard greens are among the traditional side offerings. Flinn sources his food locally whenever possible, acquiring everything from meat to maple syrup to moonshine from nearby purveyors.

“We do have a really good food program here in Columbus, and that’s our biggest thing, is we’re trying to drive this restaurant to showcase what we have and what we can utilize just inside the city itself,” he said.

The standout cocktail menu is worth a look, even for wine drinkers. Each of the 10 signature cocktails is named for a classic hip hop song, and the list is likely to leave you humming your favorite college dance tune while you wait for your drink. Options like the “Empire State of Mind,” Master Mixologist Tyler Plymale’s smoky take on a manhattan, and the “Five on It,” featuring a secret-recipe green chartreuse sourced from French monks, strike the balance of whimsy and complexity that distinguishes the restaurant.

The staff is invested in creating an atmosphere that is different from other local dining experiences by combining a “lounge-like vibe” with an upscale menu. As for a dress code? It’s very much come as you are.

“You come here, you can have a thousand dollar bottle of wine. You can have a $400 pour of liquor, and you can just, you know, wear your sweatpants and chill,” Plymale said.

And their approach seems to be working. The restaurant recently had a record-setting day during what is typically a slower period—post-holidays, and the DC Hen Quarter restaurants are now looking to their Columbus sibling for inspiration. Indeed, Jordan’s bet with Thompson that brought Hen Quarter to Columbus in the first place appears to have paid off.

“I don’t know if the words ‘You won’ were said,” Armstrong speculated, “But I think that they might have been said in private.”

Hen Quarter is located at 6628 Riverside Drive in Dublin. It will hold regular wine and bourbon-themed events beginning this Spring. To learn more, visit henquarterdublin.com.