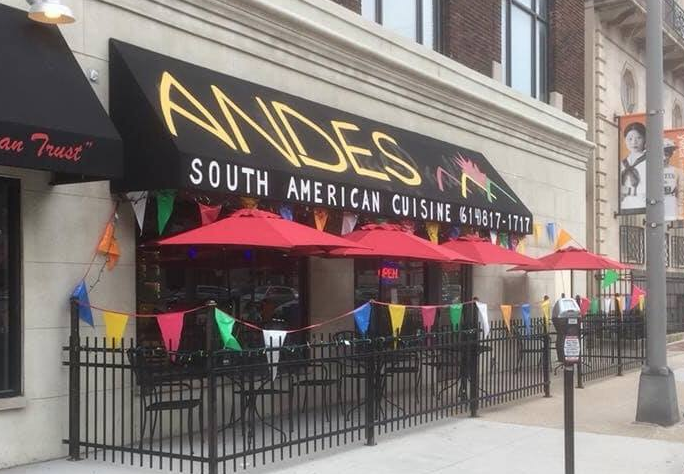 Welcome to our ongoing feature highlighting the best international cuisine in Columbus, “Around the ‘Bus in 80 Plates.” Consider this your challenge to try something new!

Situated in the busy 4th street corridor in Downtown Columbus, Andes Bar and Grill stands out from its drab surroundings thanks to its colorfully painted awning and decorations. With a superb and diverse menu of South-American favorites from chef-owner Jorge Nisthauz, the food at Andes stands out, too.

A veteran of the New York food scene, Nisthauz is a seasoned restauranteur with decades of experience under his belt. When family circumstances prompted a relocation to Columbus, there was no question that he would share his expertise with his new community. With the founding of Andes Bar and Grill in 2017, Nisthauz set out to bring authentic South American cuisine to a city that was sorely underserved in that department.

While certain ingredients or preparations are held in common by the nations of the Andes region, each has its own unique culinary traditions. With his menu, Nisthauz set out to represent something from each country that touches part of the Andes mountain range.

The result is what Nisthauz touts as a culinary vacation to the Andes in the heart of downtown Columbus. When I visited for lunch this week, the first stop on my trip was Bolivia, for a traditional saltena.

The Bolivian take on the empanada, chef Nisthauz describes saltenas as a very important part of Bolivian food culture. It is a preparation that he clearly takes much pride in, boasting “they wanted to call me the ’empanada’ king for this one!”

The care that goes into the saltena is obvious at the first glance of its glistening, flaky crust. The insides, which contain a rich mixture of black beans, chicken, and peas, are satisfying in a way that elevates this empanada beyond the territory of mere appetizer. Even if you’ve never set foot in Boliva, the saltena’s hearty filling reminds of the flavors of home.

While I was sworn to secrecy, the chef imparted to me some of the secrets that go into preparing his saltenas. I can assure you, there is no empenada in Columbus that is receiving this level of forethought and care.

Highlighting the restaurant’s vegan offerings, the next course was a salad of mixed greens with diced bell peppers, topped with a blend of quinoa and crumbles of mild white cheese. While the salad itself should be fairly familiar to western palates, the banana-mango vinaigrette that accompanies takes the experience to new (and delicious) territory.

For the main course, chef Nisthauz served up one of the restaurant’s signature entrees: chicharrones moderno. If you see the word “chicharrones” and immediately think “pork rinds,” think again.

The chicharrones at Andes Bar and Grill are made from thick chunks of sliced pork belly, marinated for 2 days in a proprietary blend of spices. The depth of flavor in this dish is matched only by the varied experience of texture in each bite – crunchy, tender, fatty (in the best way) pieces of pork that explode with succulent juices.

Served with chimichurri and house-made relish, the chicharrones are also accompanied by a simple side of rice and beans. Even in the ubiquitous red beans, the flavor is extremely deep and developed, highlighting the care that chef Nisthauz brings to every detail of his cooking.

With a full bar including South American-inspired cocktails and hard to find soft drinks from the region, Andes Bar and Grill is an ideal gathering place for anyone seeking the unique flavors from way, way south of the border.

To keep things fresh and to help fully represent South American food culture, chef Nisthauz is always adding to his menu, which rotates twice a year in summer and winter. The one thing that remains constant is the commitment to authenticity – no americanized takes here.

In addition to some of the best South American food you’re likely to find in town, the atmosphere at Andes Bar and Grill makes for a fun trip outside of the ordinary. The restaurant’s interior is done up in bright colors, with plenty of regional flair to put you in the Andes state of mind.

Not afraid to step out of the kitchen, Chef Nisthauz is a welcoming host who clearly hopes to make his guests feel welcome. In the time I spent there, he chatted with regulars and newcomers alike as if they were old friends.

Whether South American cuisine means a familiar trip home, or a whole new adventure, Andes Bar and Grill is the kind of place that will leave any culinary traveller satisfied.