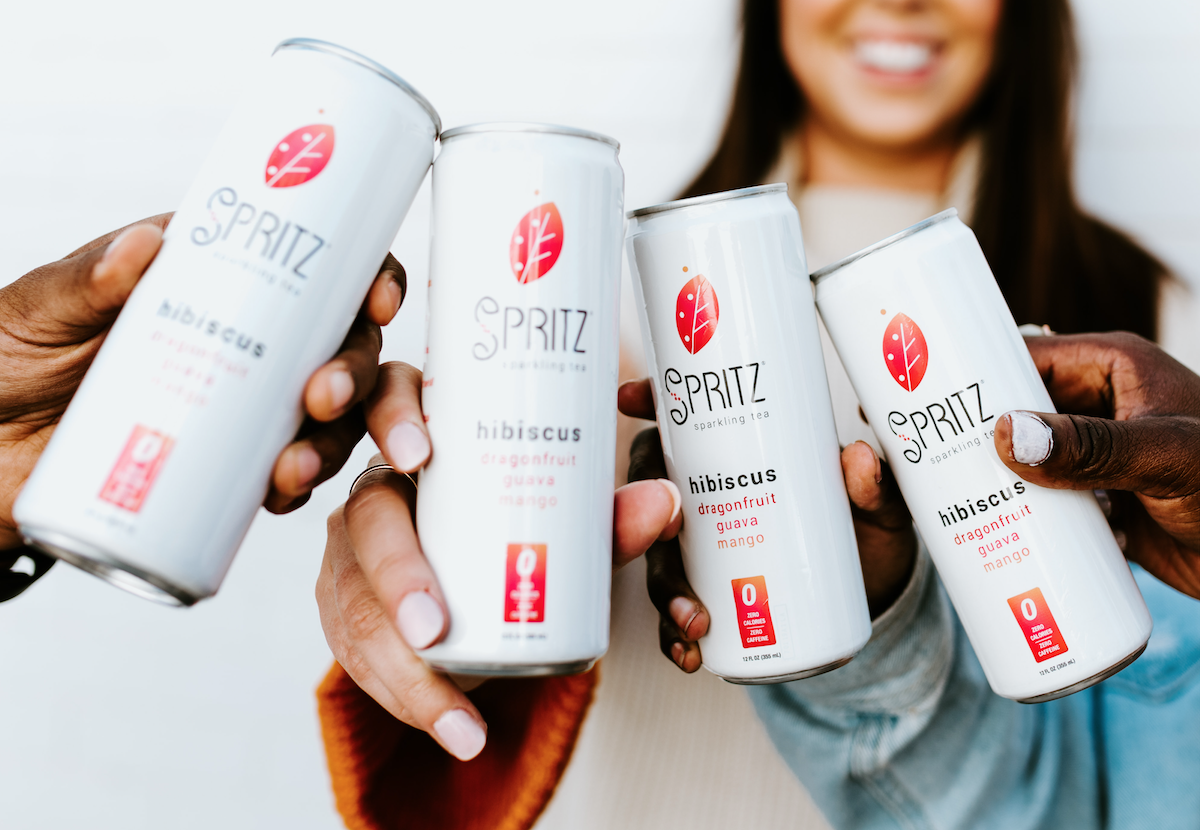 It’s Friday night and you and your friends are at the bar. While everyone else is sipping back glasses of wine, cocktails, and beer, it’s your turn to be the designated driver of the night. We all take our rounds, and these rounds are usually a reminder that being out at the bars sober while everyone else is working on getting intoxicated just feels off. As your friends reach for their glasses to toast in celebration, you might take a sip of your ice water, or just wait to get the nod to round up the crew and go home. However, Kathyrn Dougherty is hoping to change this all-too-common situation with her line of non- alcoholic sparkling teas called Spritz.

Spritz is a new beverage hitting the markets based out of Dublin, Ohio. In a world where grocery stores offer seemingly endless options of sparkling waters and flavors, it was really only a matter of time until the trend took to tea. But, unlike the famous La Croix and Bubly on the market, Spritz is much less carbonated, giving it a lighter mouthfeel. They’ve even coined a phrase for it: softly sparkling. Combine that with flavors such as green tea with pomegranate, lemon, and peach, and Spritz might quickly become both your mid-day pick-me-up as well as that refreshing drink you enjoy in between a night of cocktails.

The idea for Spritz comes from Dougherty’s background in health and fitness. A few years ago, she and her friends were training for an Ironman competition. These competitions are not for the light of heart, as they feature 2.4-mile swim, a 112- mile bicycle ride, and a 26.22-mile marathon in this exact order. It goes without saying that training for and competing in this leaves little room for hangovers. As Dougherty and her friends would hang out more after workouts, they noticed they were craving a more sophisticated drink that wouldn’t cause a splitting headache the next day. Thus, an idea was born.

It started simple for Dougherty. At the time, she was (and still is) a big fan of sparkling waters. She also had grown a heavy affinity towards Teavana, a tea provider now owned by Starbucks. After scrubbing used Gatorade bottles with disinfectants and cleaners in her very own kitchen, Dougherty and her step-daughter began the process of brewing what would eventually become the basis for Spritz. While she no longer uses Teavana for her tea blends, she still holds a special spot for them in her heart.

Fast forward to present day and Dougherty is ready to release Spritz to the public in December. The first iteration of the teas will be hibiscus with dragonfruit, guava, and mango with no caffeine. Dougherty said this tea is great for unwinding after a long day, or simply treating yourself after a good stretch at a yoga class. The zero calorie, zero carbs, and gluten-free drink is both vegan and keto friendly so it fits essentially any diet. And while the idea for Spritz began during a time of looking for an alternative to alcohol, the drink maintains its fitness roots as Dougherty works to get the drinks in places such as PAI Yoga and Friendship Fitness in Dublin.

“I want something I can grab and say, ‘Hey, I get a treat now,” Dougherty explained. “But, it’s not going to be something I feel bad about.”

Spritz also serves a second purpose, and it’s something Dougherty feels is very important to the brand of the business. It’s women’s empowerment, and through channels such as hiring more women at proper pay rates to close the pay gap, or promoting other women business leaders through their hashtag #FemaleFounderFridays on Facebook, she hopes to change a few practices within the industry. In her mind, the best way to do so is to lead by example.

From her team being comprised of women, to working out of the space at Haven Collective—a woman-owned and -operated co-working office—Dougherty is very much walking her talk. Add in the fact that 1% of all sales this year will be donated to charities and nonprofits that empower women, and it’s clear that she is just as much invested in uplifting women as she is with concocting delicious beverages.

“For some people, [women’s empowerment] means being a stay-at-home mom and having 10 kids—that’s wonderful. I will celebrate that that’s your path in life and that’s amazing,” Dougherty said. “If you’re a woman who doesn’t want to be married and doesn’t want to have children, that’s amazing. Go do that. My number one thing here is that women can feel like they can choose the path that’s right for them and not apologize for being too ambitious, or ‘not ambitious enough.’”