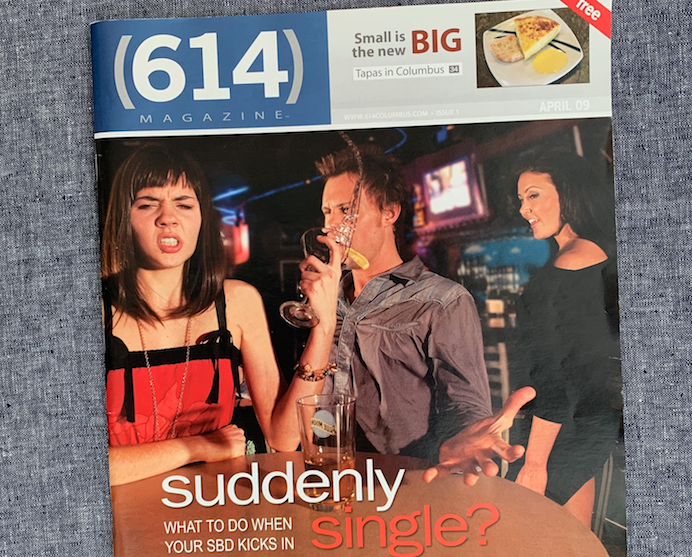 Where were you ten years ago? If you’re anything like me, looking back that far gives you a serious case of the cringes. I’ll spare you the details, but if I had to do it all over again, there’s more than one thing I’d do differently (no, former me. I don’t care how hungover you are, Four Loko is not an acceptable breakfast beverage).

While most of us are subject to the follies of youth, that’s simply not the case for (614) Magazine, which turns 10 as of this year’s April issue (on newsracks now!).

Since the beginning, (614) has strived (striven?) to showcase the best that our fair city has to offer. It’s a mission that continues to this day, a decade later, and it’s something that we tackle with the same sense of wonder and optimism that has carried this publication from the beginning.

OK, so maybe there have been some growing pains. We’ve fiddled with the format and bid fond farewells to an editor or two. But, that’s nothing compared to the changes this city has experienced since 2009.

For this week’s edition of TBT, we’ll take a look back at the first issue of the magazine that you graciously embraced as part of the fabric of the city a full decade ago.

Our events calendar remains the go-to spot to keep up to date with what’s hip and happening in the city. The first-ever event in the first-ever issue screams “2009” louder than a Black Eyed Peas playlist blaring from an I-Phone 3G:

Democrats in office? Stimulus package? The promise of booze on the statehouse lawn? This event somehow makes us long for the time of one of the worst recessions in US history. (We could take or leave The Crash Test Dummies, though. Talk about a blast from the past!)

For a time, (614) rocked a separate calendar featuring upcoming concerts. Looking back on this first edition suggests that while much has changed since 2009, when it comes to our collective musical tastes, much remains the same.

The likes of Morrissey and The Black Keys are still actively touring in 2019, and Dr. Dog and The Spikedrivers continue to delight the local scene. If it came right down to it, this calendar might not look out of place in a 2019 issue of the mag. One thing’s for sure, if Diplo came to town today, he’d probably have to upgrade to a larger venue than Skully’s.

Our approach to restaurant previews hasn’t changed all that much since the beginning. We’ve always tried to give you the scoop on the latest and greatest eateries from across central Ohio. Columbus food and drink is a constantly morphing landscape, and nothing highlights that more than a quick glance at our food section. The past ten years have seen some great concepts open in our city, and we’ve said goodbye to some favorites as well (RIP Barrio).

It’s all fun and games until somebody fills in that crossword puzzle you were saving for your lunch break. The puzzles section is one recurring feature that’s fallen by the wayside in the years since 2009. Would you like to see it resurrected?

Like the city itself, we’ve seen many faces come and go over the years at (614). However, many of the contributors who were with us for this first issue are still part of the team to this day! Talk about commitment.

More than anything, we want to take the time to thank you, our dear readers, on the occasion of the magazine’s tenth anniversary. What we do would not be possible without you! We may not be perfect, but we’ve come a long way in the past ten years. Thanks for taking this journey with us—here’s to the next ten!

What are some of your favorite memories of Columbus and (614) Magazine from the past decade? Any old features you would like to see revived? Let us know in the comments!