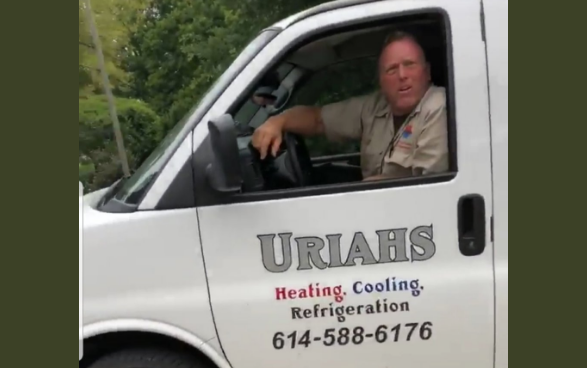 Remember the racist business owner who was caught on video calling a black man the ‘n-word’ last summer? We’ve got an update on him.

Jeffrey Whitman, owner of Uriah’s Heating and Cooling, pleaded guilty to ethnic intimidation, a reduction from the original disorderly conduct charge, reports NBC4i. He was given a six-month suspended jail sentence and a $500 fine for the road rage episode.

The victim, Charles Lovett, is disappointed with the sentencing and wishes Whitman would’ve been given more jail time.

The July incident stemmed from Whitman believing Lovett had cut him off in Morse Road traffic near I-71 and Sinclair Road.

“I just want to let you know what a n****r you are,” Whitman said to Lovett from his company van.

Lovett captured the encounter on video and posted it to Facebook where it quickly went viral.

Soon after the altercation, NBC4i caught up with Whitman who told reporters he did not regret calling Lovett the ‘n-word.’ He’s since changed his mind.

“I would like to apologize to Mr. Lovett and his family. What I’ve done, and, ugh, I deeply regret it, and it is genuine,” said Whitman in court.

Also in court, Whitman admitted to losing his $400,000 a year business and is looking into filing bankruptcy.

Whitman’s lawyer Mark Collins said he had received professional help, counseling, and participated in outreach with the African American community.

Lovett has since gotten his Concealed Carry Permit because he says he lives in fear, reports NBC4i.

Several dogs are sick and a few have even died in a case being investigated by Columbus Humane as a possible poisoning attack in North Linden.

Gypsy was the registered support animal of Hannah Broadway, reports NBC4i. A Facebook post that Broadway was tagged it revealed Gypsy was discovered in a pool of her own blood, having suffered organ ruptures. She ultimately died from internal bleeding.

Broadway then posted an update of her own, saying she is "still at a loss for words as to what happened."

But, before Gypsy or any of the other dogs got sick, an anonymous person made threats to another pet owner in the area.

Broadway's neighbor Elaine Putnam received a letter in the mail with no return address, threatening to give her dog "a couple rat poison meatballs" if she didn't get her dog to stop barking.

Putnam believes the person who sent the letter is also the person targeting other local animals.

The Franklin County Animal Care and Control anticipates more dogs in the area to show signs of being possibly poisoned. They advise dog owners to survey the yard before taking them out to use the bathroom.

Samples from the effected dogs are currently being tested to confirm or deny poisoning.

Columbus Humane is asking that anyone with any information come forward.

Around 12:05am, a report came in about gun shots. Columbus police arrived on the scene to find two individuals with multiple gunshots near the Grandview Carry Out at 1355 Grandview Ave.

The victims were transported to local hospitals and are undergoing emergency surgery, reports 10TV.

Police continue to search for a suspect.

The suspect is described as a white male between 20-40 years old, 150 pounds and 5'6". 10TV adds he had a black eye on the right and a shiny area on his face that appeared to be a skin graft.

Dublin will never be the same with new pedestrian bridge, opening soon