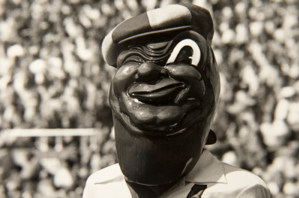 As any true Ohio State fan knows, Brutus Buckeye is more than just a school mascot, he’s a crucial member of the OSU family. Since debuting on Oct. 30, 1965 at the Minnesota vs. OSU homecoming football game, Brutus has gone through many iterations, some definitely better than others. Here’s a look back at how Brutus became the lovable nut head we know him as today! 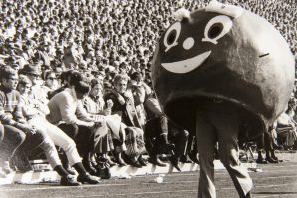 The original Brutus Buckeye costume was an unwieldy papier-mâché creation, pieced together with crude bits of wood and chicken wire by undergrads Ray Bourhis and Sally Lanyon. They were simply tired of not having a proper school mascot, and decided to take things into their own hands. Surprisingly, it was an instant hit among the student body. After two weeks, the head was upgraded to a lighter and more durable fiberglass version, and the name was selected in student-voted poll in November 1965. 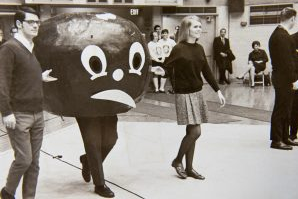 Three years later saw the costume’s first major redesign, bringing with it a mouth that could be flipped from a wide grin to a pouty frown when the Bucks were doing poorly in a game. Luckily, because we’re talking about Ohio State athletics, that was almost never the case, so the mouth was kind of a moot point.

For some reason, a full decade after introducing a mascot that was quickly beloved by the student body, Ohio State decided to really switch up the game and go with a much smaller and grotesquely horrifying head. The costume also featured a much more anthropomorphic body allowing the wearer full use of their arms. We understand what they were going for, but as you can see, the result was a goddamn horrendous disaster. This terrifying Brutus only lasted one year. 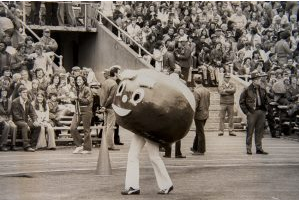 After that ill-conceived costume was laid to rest, it was back to a large fiberglass head for the 1976 season. The arms were once again lost but the addition of big bushy eyebrows made this rendition still sort of creepy in its own unique way.

Just one year later saw the debut of this incredibly dopey looking Brutus featuring a very timid facial expression and no mouth whatsoever. Not too intimidating by any means, but that hat is pretty sick.

It took the school 15 years before they finally landed on a costume design that resembles the one we know and love today. A new decade saw Brutus’ enormous nut-head shrink to a size that could comfortably rest on the shoulders of its wearer. This allowed them the freedom to use their arms to get sports fans pumped the fuck up, which was the whole point in the first place.

More than 40 years after he first debuted, Brutus had definitely earned a place as one of just eighteen characters in the Mascot Hall of Fame; a great honor that includes characters from all sports, both collegiate and professional.

Today Brutus appears at over 500 events every year, from sporting events to charity appearances.  While he may undergo minor updates and wardrobe changes over the coming decades, he’s finally found his look, and Ohio State’s iconic nut-man is here to stay.