Studio Rouge in Grandview isn’t your average fitness studio. Here you’ll find classes in pole dancing, aerial fitness, and exotic dancing—including the aptly-named “Twerkout” class. And it’s not just for those who want to be on stage.

The butt-lifting Twerkout class doubles as both sensuality and body positivity lessons for all. Taught by Tracy Ruby, she prides herself on being aptly coined “twerk technician,” having taken lap dance and pole dance classes at Studio Rouge before becoming a regular instructor.

“It’s so much fun to see other people who come in, not sure what’s going to happen, and find that they can do it,” Ruby says. “The idea behind Twerkout is to take ‘twerk’ and make it a workout—to give people a new dance environment where they can come and they can learn new skills. [They can] take those home or to the club or wherever they want to do their new booty-poppin’ moves.”

Ruby first assesses the physical needs and limitations of the class, combining twerk moves with traditional exercises as a mash-up with the ideal butt lift.

“If you go through Instagram, you can plug in ‘twerk’ and see all these different people coming up with different moves that work really well for their bodies, but during Twerkout, there are certain moves that’ll work for one person that won’t work for another,” she says. “Our booties are all shaped differently; our bodies all work differently. When you see people on Instagram, they’ve found all these moves, put them together, and they got their booties to twerk in these magnetical, amazing ways.”

While visitors may scroll through Instagram before class to get a gauge of what they can expect from Twerkout, Ruby insists upon using repetition in areas where guests may feel they’re lacking. “You build natural muscles with, for instance, twerk, where you’re working specific calisthenics to enhance your sense of your motions,” she says. “It’s healthier. I mean you’re building your muscles. You’re not just implanting new material. We do a lot of squats in class, because that’s where you’re going to help get your leg joints, back joints and muscles in these areas to be more responsive and stronger.”

As Ruby encourages doing squats outside of Twerkout, she also stresses the importance of proper form with an extensive warm-up to match. “We do quite a bit of warming up of the spine so that your back is ready for all that we’re going to ask of it. Then we’ll go into some twerk drills, which is where the workout kind of kicks up and we’ll have some traditional exercises along with learning new twerk skills,” she says. “We will go through some core moves for twerk, that are specifically for a twerk and then we’ll start putting together some choreography […] based on those core moves, maybe adding in some new ones. Once we have our choreography built, we will run through it a few times so that you’ve got something to take with you, and then there’s a cool-down period.”

Twerkout guests may struggle during a session, but Ruby firmly assures that she won’t let her class fail. “Say one move is not working for you in class. If it’s not working for you there, keep working on it. It may just never be your move, you may not care for it. That’s fine. That happens in all kinds of classes,” she says. “Burpees, for example, [are] not everybody’s favorite. Some people are good at them and love them. Other people do not, but you can keep working at it, get better and eventually master these skills.”

Ruby indulges in plain yogurt and granola as a protein-oriented go-to snack following a session of Twerkout, and she encourages her class to enjoy any food that nourishes and energizes their bodies, er, booties. Following this downtime, she looks forward to amping her class back into gear.

“There is never a moment where I’m not encouraging you. Everybody has a moment every day when they wanna give up. My job as the instructor is to help motivate that person and everyone else to keep moving, just keep going. The studio itself is built around self-love and finding ways that you appreciate your own body and can share that with yourself and others,” she says. “Come in and see what it’s about! It’s an hour, okay? So you’re not going to spend five hours with me doing something you don’t like, and I promise you’ll have fun.”

Find out more about classes at Studio Rouge in Grandview at studiorougecolumbus.com.

A big percentage of the resolutions we make every year involve getting in shape and/or improving our overall wellness. But running on a treadmill is only slightly more attractive an activity than, say, waiting in line at the DMV. And unless you can sit still for more than two minutes, meditation is out of the question. If you want to really challenge yourself to step outside your normal bubble, face your fears while finding balance. You’ll conquer your phobias AND the scale. 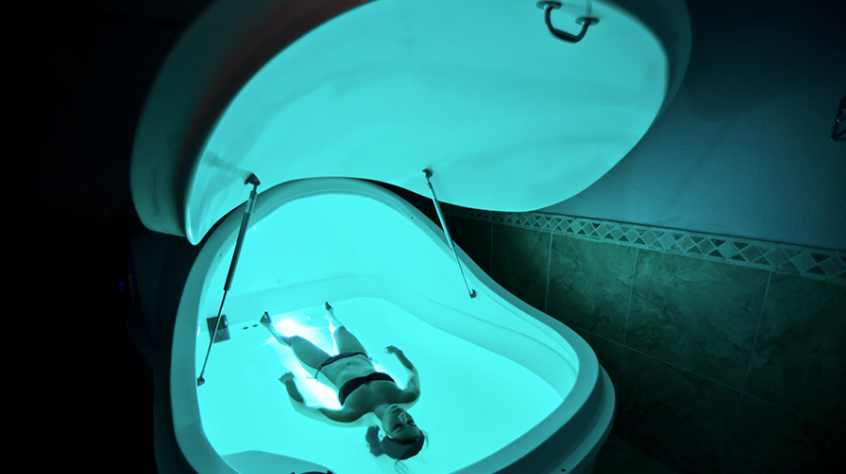 You can achieve a state of buoyancy akin to floating on a cloud. The key is a pod filled with hyper-salinated water, heated to the temperature of your skin. Reduced Environmental Stimulus Therapy can help your mind find peace. 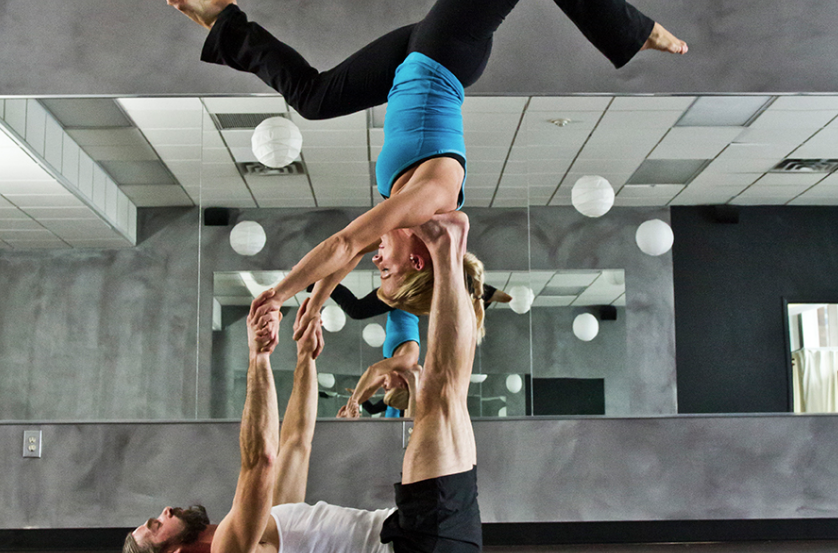 Did you ever dream of becoming an acrobat? This exercise consists of poses done with a partner. You can make human pyramids, or even learn to stand on each other’s shoulders, or contort yourselves into knots of fun.

Raise your skills to the roof with aerial silks, the skill made popular by Cirque Du Soleil and performing artist P!nk. A long swath of fabric pours down from ceiling supports, and the performer uses friction and strength to support themselves in poses among the waterfall of silk.

The depths of the ocean hold more mysteries than the surface of the moon. Brave men and women strap Self-Contained Underwater Breathing Apparatus to their backs every day the world over, and dive into the unknown.

If you thank your lucky stars for gravity, and the hard ground under your feet, maybe it’s time to shake yourself free of the terra for a few ticks. The Buckeye Bounce Club is a gym where the workouts are done on wall-to-wall trampolines, or rather, ceiling-to-ceiling, as the walls themselves are bounceable, just like the floors.

Water, H20, aqua: the most basic of necessities for human life. Water is a vital part of many bodily functions, including removal of waste products, but can we make water even “better” for us as a “detox water?"

H20, i.e. two hydrogen atoms connected to an oxygen atom, is the chemical identity of water. This specific formation is what separates it from other molecules, and makes it the most vital substance to human existence.

Soaking things in your water like ginger, cinnamon, or cucumbers can alter the taste but will not chemically alter the structure. Water infusions like the ones listed in the post above can taste great, but water is still H20 and will function as such.

Take-away: Don’t let social media tell you water can be changed to a magical detox; water is already an amazing life giving drink. Instead, use social media for inspiration for trying a new tasty drink that might help you get the adequate hydration you’ve been struggling to get!

@DietBetch, a popular Instagram account with over 213k followers, tends to post memes that subtly poking fun at our diet culture. But recently, I was disappointed to see a post about a "30 Day Challenge" that reinforces the unhealthy, fad diet-obsessed world we live in.

This "30 Day Challenge" prohibits participants from consuming foods that many people often associate with being “unhealthy” like soda, candy, and doughnuts.

As a dietitian, I’m not going to disagree that the foods listed do tend to be higher in nutrients of concerns—like added sugars and salt, and overall calories—but, I absolutely believe they can be part of a balanced diet.

By completely removing foods from the diet with a 30 Day Challenge like this, one will simply think, “No…for this month." This purge-style challenge won't teach healthy sustainable eating habits like intuitive eating or portion control.

Take-away: Instead of tagging a friend for a restrictive diet challenge that doesn’t set either of you up for long-term success, try implementing a small sustainable change. Maybe instead of going out for fast food every day of the workweek with a friend, you both could try packing once a week and share recipes and meal ideas!