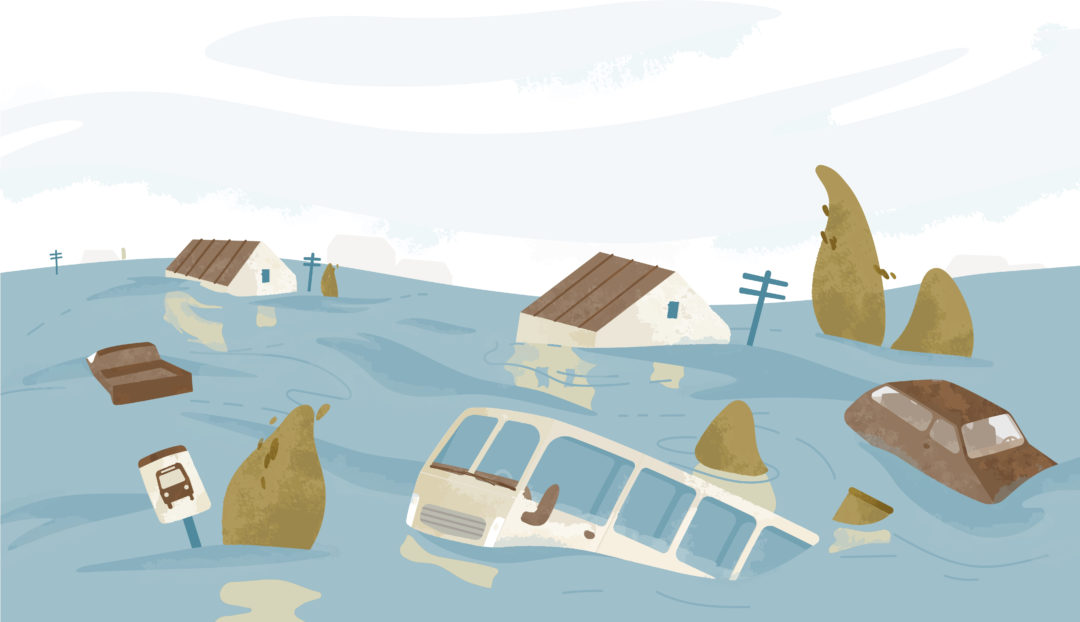 I know plenty about rivers. I have a natural science background, and I’ve grown up creeking, canoeing, and kayaking.

I know a lot about the floods that happened in Columbus in the early part of the last century. Through a year of research I did for a (614) story that came out in 2015, I interviewed dozens of experts, spent time on and in the waters of the Scioto and Olentangy, and acquainted the tip of my nose fondly with the pages of ancient surveying books from the county auditor, and histories of Franklinton and the surrounding areas.

I even know a little about Franklinton.

But I know absolutely zero about opera.

I don’t know, and didn’t grow up with, anyone who is an opera fan. And when I choose the music that I listen to or go see, it is decidedly not opera.
So, my interest was piqued when I heard that a new show was rolling into town. Opera Columbus and ProMusica have collaborated on a commissioned opera, The Flood, a modern story sung in English about events that rocked these very streets over a hundred years ago.

The Great Franklinton Flood happened in March of 1913. Days of rain and a spring thaw raised the level of the Scioto river past the wooden flood wall’s capacity. The wall burst, and millions of gallons of rushing river pummeled the settlement that had for two centuries been building up on the west banks.

Those that were able fled for high ground in what is now the Hilltop area as the torrent stripped the low-lying land bare. Schools, homes, churches were destroyed and swept downriver. Some buildings in Franklinton still testify their survival with water marks, far above the heads of 21st century spectators.

When the frigid waters receded, 93 were tallied dead. (The actual number is possibly higher.)

Rebuilding efforts were hampered by mud and cold, and the fact that the bridges across the river—bridges that would lead to help and supplies—had been torn away. It would not be the last time the flood wall was breached. Subsequent floods would rock the bottoms until a high, strong wall was built in 2004. It stands now at 30 feet, higher than the waters have ever risen.

This is a story few have heard, even within the confines of our city. Despite its devastation, the Franklinton Flood is a story that, like the waters of the modern rivers, has receded quietly.

Opera Columbus aims to change all that.

They have spearheaded a movement which has borne a new story from history. Using a ground-breaking custom set, and meticulous costumes, The Flood ventures to tell the story of a Columbus family afflicted by the disaster, people who gaze out over the same river many of us pass by every day. This connection should not be lost on the viewer. But who is the viewer? To whom does this history belong?

Frankly, I did not believe it belonged to me. A Columbus resident, I hunger for more information about our shared history. But I never thought I was an opera goer.

There was someone who knew better.

The Creative and General Director of Opera Columbus, Peggy Kriha Dye is a Julliard-trained, world-traveled opera singer who allowed non-opera-going me to sit in on a rehearsal of The Flood in Opera Columbus’s downtown headquarters. What I experienced was transformative.

After some quick notes and feedback, the artists launched into an aria sung at the side of a dying woman’s bed, palpable sorrow in the man’s huge round voice. The power that came from the singers stupefied me as the skill-honed and diaphragm-supported crescendos filled the high-ceilinged room. I could feel the reverberations through my sternum. I looked downward, overwhelmed by the intimacy promised from eye contact with a singing performer.

(614): How is creating a commissioned opera is different then re-creating a classical opera?
Dye: We are starting from scratch! We chose the composer, librettist (writer) and topic to get the show created. That takes approximately one year. We have two workshops with singers to work out the kinks. We had one in NYC and one in Columbus. Then the librettist and composer take the notes from the workshops and make the necessary changes. The parts for the orchestra also have to be created. Once all that is finished (a three year process) we start a five week rehearsal in Columbus. That is normally where we would begin for a typical production. In addition, the cost is double that of an average production…so lots of fundraising!

What was the inspiration for deciding to tell the tale, over a century after the terrible flood?
Janet Chen, my co-producer and Executive Director of ProMusica Chamber Orchestra, and I wanted to commission a piece that is about Columbus and would give references to the city. We wanted to bring Columbus into the art that is being created here. We met with WOSU to discuss their series, “Columbus Neighborhoods,” and asked them, what neighborhood has a story that is epic, i.e. operatic. The flood of 1913 that affected the neighborhood in Franklinton the most, was the obvious choice. Nothing has shaped the city more than that event. Its traumatic effects and stories have been passed on through generations of those that live here.

“The story is about an event that shaped our city. It’s a drama full of suspense and mystery with music that was created for this production and for this Columbus premiere.”

There is a juxtaposition between the state of Franklinton as it exists now, and the perceived target audience for opera. West Franklinton has a lot of poverty and homelessness. While opera is seen widely as a refined, high art. What can build a connection between these worlds?

We didn’t want to produce a show about Franklinton, only to exclude the residents from the actual show. We have made thoughtful decisions about how we can marry the show to the people of Franklinton. We are bringing Korine, the composer to schools in Franklinton to share insights about the production with them. Janet and I gave a presentation at LifeCare Alliance. We answered questions and brought some performers with us so that they could get a taste of the opera. With the help from some generous donors, we are bringing coach busses and offering premium seats for free to approximately 100 Franklinton residents. Opera Columbus is striving to change the perception of what an audience member has to be. Our logo says it for us, “Make it Yours.” Our regular tickets start at $25. We realize that $25 is still substantial to many, and we are hoping Franklinton residents will take us up on the free tickets we are also providing.

Can you tell me how opera has changed as it has evolved into the modern day?

The operas themselves have evolved. We often take a traditional opera, and shorten it to no more than two hours, translate to English and use surtitles. We might also take an opera traditionally set in the 1700’s and produce it into modern day or in a setting more relatable. We don’t cast according to color and sometimes even gender, but according to talent. If that means we need to modify things, we do. We incorporate technology, film, and sometimes modern instruments like electric guitar. I think it’s foolish not to use all the modern resources we have if it can tell the story better. The music is timeless and olympic. It’s the story that I’m interested in evolving. The topics are going to always be relevant; loss and tragedy, love and passion.

Why should someone who has never been to an opera before consider seeing The Flood?

The story is about an event that shaped our city. It’s a drama full of suspense and mystery with music that was created for this production and for this Columbus premiere. ProMusica is playing!

You will witness a world premiere.

It’s only just over an hour.

We have a bourbon bar.