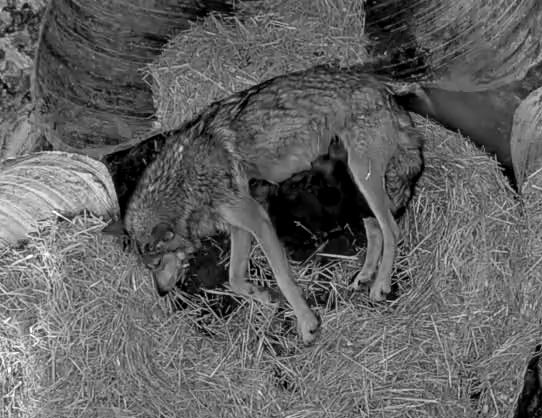 The Columbus Zoo and Aquarium has announced the May 6 births of four Mexican gray wolf pups—the first born at the Zoo in 14 years. According to a press release issued by the zoo, the pups’ births mark a significant achievement for the future of the Mexican wolf, which is the rarest subspecies of gray wolf in North America.

The pups sexes of the pups are currently unknown (care to get between a wolf mother and her newborns for a check? Us either). This was the first-ever litter for mother, Winter, and father, Storm.

Both of the wolf-parents are three years old, and arrived at the Columbus Zoo earlier this year. Winter came to the Columbus Zoo on Dec. 17, 2018 from the Wolf Conservation Center in South Salem, New York, and Storm arrived on Dec. 11, 2018 from the Endangered Wolf Center in Eureka, Missouri. The two were paired at Columbus Zoo through a collaborative effort between the Association of Zoos and Aquariums’ (AZA) Mexican Gray Wolf Species Survival Plan® (SSP) and the U.S. Fish and Wildlife Service’s (USFWS) Wolf Recovery Plan, which works to help reintroduce wolves to the southwestern United States.

Mama and babies are being monitored by zoo staff via a closed-circuit camera. The team at the zoo reports that Winter, “has provided excellent care to the pups, whose eyes have recently opened, while Storm occasionally peeks in on them during breaks from patrolling the habitat.”

“We are extremely proud to participate in this collaborative program working to protect the future of the this important species that nearly went extinct in the 1970s. The birth of these pups is to be celebrated as this achievement offers additional hope for the Mexican gray wolf,” said Columbus Zoo President and CEO Tom Stalf.

The program has already made some strides in improving the endangered wolf populations, and the Mexican gray wolf population is finally experiencing a small rebirth since human intervention programs started in the late 1990s.

Although the pups are not currently visible to guests, they may begin venturing out of the den with their mother soon. For more information and updates, be sure to follow the Zoo on Facebook, Twitter and Instagram or visit the Zoo’s website.