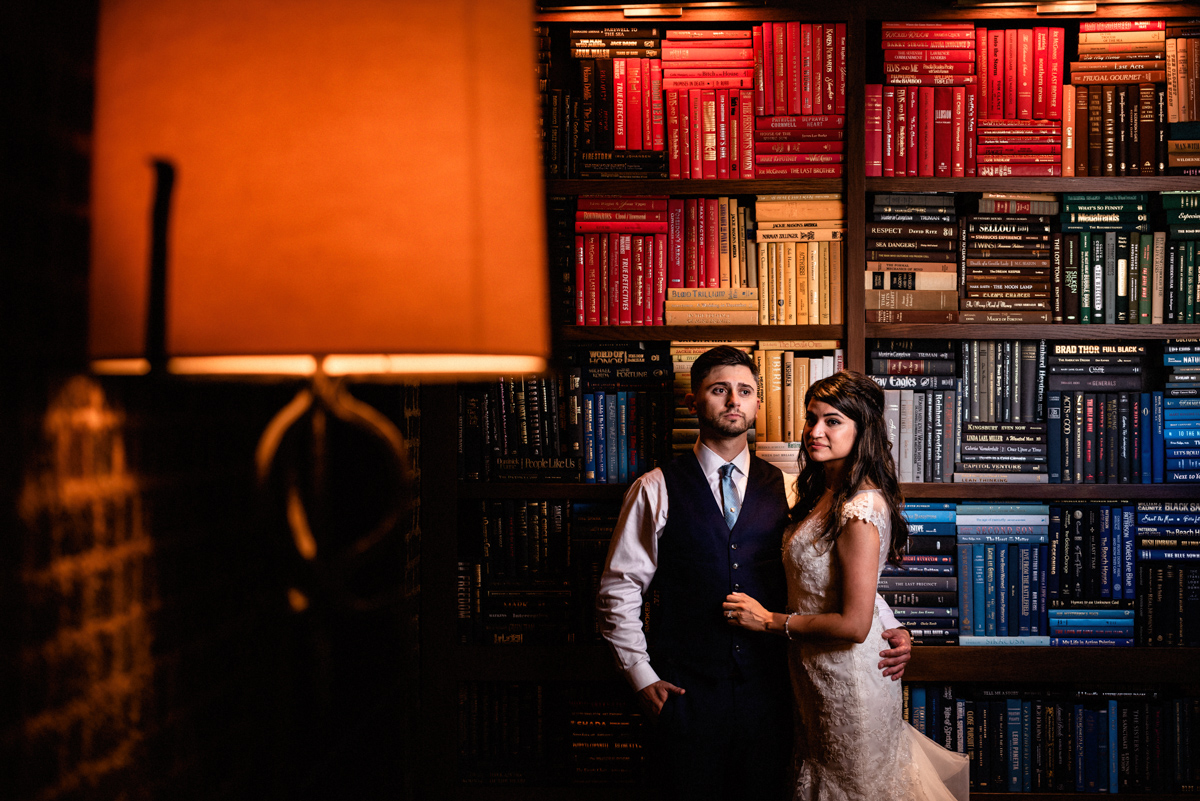 It doesn’t get much more classic than trimmed beards to start the Big Day, and bowling balls to end it. Usually the girls get all the special attention to detail on the big day, but for Brooklyn and James, the men were just as spiffed up as the ladies. The guys got their trim on at Goodfellow’s Tonsorial Parlor in German Village. Before the ceremony, they all enjoyed some primp time as they got their hair and beards trimmed and enjoyed some cocktails in the third floor billiards lounge. The groom and groomsmen and the father of the bride and groom were all there to get freshened up.

The ladies had their hair and makeup done in their private suite at the ACC, just upstairs from where that evening’s festivities would go down. They scooted around town in a charming private trolley for photos before heading back to the club for the beautiful ceremony. After saying their vows in front of their friends and family, it was down one floor to the pool lounge, private bar, and bowling alley of the ACC.

Did anything go comically wrong, or was there anything you wish you had skipped?  The weather on our wedding weekend was looking questionable that entire week with pop up storms being possible (typical Ohio!). We shrugged it off knowing that everything would be inside, but just in case, I ordered clear umbrellas for the wedding party to carry in case we needed them for photos. When we stepped out for group photos at the Statehouse is when the sky decided to open, and we were stuck without the umbrellas which were left at the venue! Luckily, our photographers are total pros and had a couple of their own handy, but we laughed since we had tried to prepare and still failed. Funny enough, those umbrella photos are some of my favorites now!

Was there anything you did or had that made the big day easier? As with most weddings, hair and makeup for the ladies takes up most of the time leading up to the actual wedding itself, and there’s not usually much for the guys to do. To give them their own moment, we booked hair trims and beard touch ups for all of them. They got freshened up, got ready, and even got to hang out on their awesome third floor lounge space to shoot pool and have a drink with great views of the city. It was so fun to look at photos of how they spent the day afterwards!

To go along with that, the girls were able to get ready in the large bridal suite on the 6th floor of the Athletic Club (have I mentioned best venue ever?) with plenty of room to have a fun and relaxing morning, and great views of downtown. It was so convenient to use their guest rooms that night, and to get ready at the venue to save time. Even better was ending the after party and taking the elevator up to call it a night! I’d highly recommend those getting married there to reserve the suite!

Anything else that made your day stand out? We booked our string quartet through Steven Vance musicians, and in that venue, strings took the feeling of our ceremony to the next level. They played classical music for guest arrival, and were able to do a custom arrangement of a Coldplay song as I came down the aisle, which was so special. We exited to the Beatles, and had rave reviews from our guests about the added touch of the quartet!