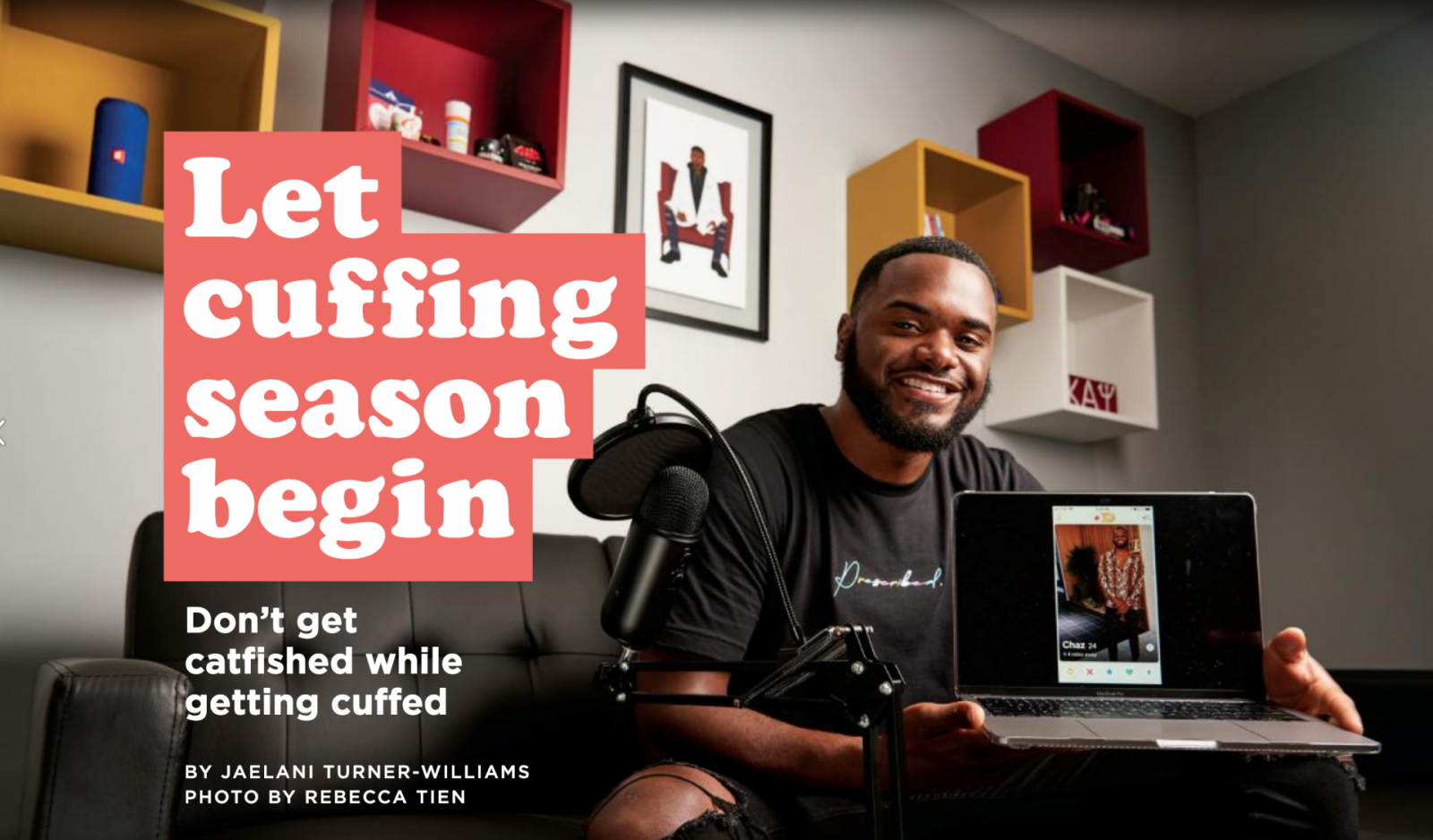 Don’t get catfished while getting cuffed

As the final dog days of August slip away, so do the casual flings of summer love. In its place come the throes of  “cuffing season,” otherwise known as the “unofficial mating season” when avid daters decide an exclusive cuddle buddy during the colder, holiday-filled  months of October through February, isn’t such a bad thing.

While the pursuit of a winter partner can be exciting, there are several hurdles Columbus singles should be wary of, especially in the dating app era. Is this only a temporary partnership or a year-round arrangement? What terms of this relationship should be disclosed upfront? How can one avoid being catfished while searching for the ideal partner?

Dewey Rice, host of dating and interpersonal relationships podcast, Prescribed With the Realest, has some real-life experience to help answer the last question.

Rice discovered that his identity was used to target suitors on Tinder after a text conversation between his friend and their co-worker revealed that his face was the profile picture for a Tinder member named “Chaz.”

“You always hear about people being catfished, but it hits [differently] when your picture is being used. I was shocked, but I won’t lie –I was low-key honored,” laughed Rice. “After making an announcement on my Twitter and having a good laugh with my friends, I forgot all about it, so ‘Chaz’ is probably still out here, lying and creating havoc in the streets.”

While the popular MTV show “Catfish” has been effective in helping guests and viewers identify when they’re being manipulated by someone online, local business Dating Directions offers the professional services of matchmaker and dating coach Elizabeth Cobey-Piper, to assist clients in finding genuine connections from behind the computer screen—especially during cuffing season.

“There are a multitude of subtle and obvious clues that can indicate you’re being catfished,” said Cobey-Piper. “Take an objective look at the communication between you and your love interest. Are you getting conflicting information? Do they seem too good to be true? Are they giving vague responses or avoiding answering your questions? In those instances, there is a good chance you are being catfished.”

“The most likely sign of catfishing is if they are delaying talking with you on a video call, or meeting in person,” said Cobey-Piper. “They may come up with good reasons, or even set up a time to talk or go on a date, but end up canceling. If they avoid meeting for more than two weeks, it’s not a good sign. Like all fish, a catfish doesn’t want to get caught. So, they will avoid meeting in person for a long as possible.”

Although dating has become overrun by technology through social media and video calls, Rice agrees that a person’s appearance and identity needs to be truthfully disclosed before hanging out.

“Instagram is where you usually find their best pictures, Twitter is where you see what type of things they are interested in, Snapchat usually shows their more ‘true’ self, and Facebook allows you to not only see their ‘glow up’ over the years but their professionalism as well,” he said.

“After numbers are exchanged and you haven’t met them in person, give it about a week of conversation and if you’re still interested, FaceTime them,” continued Rice. “Nothing is more awkward than talking to someone through FaceTime, for the first time, with nothing to talk about. This helps you see them and kind of gauge who they are, and how they may act in person.”

Finding a non-fishy potential cuffing mate is a crucial first step. Once you do, there are other things to consider, such as whether this new cuddle buddy has long term potential or is as temporary as cuffing season itself.

If clear expectations—like whether it’s a fling or a relationship, or if it’s monogamous or polyamorous—aren’t set though a transparent and honest conversation, non-verbal social cues provide helpful insight into what they aren’t saying, said Cobey-Piper.

“One sign is if they seem to want to couple up very quickly, especially if they don’t seem all that excited about getting to know you,” said Cobey-Piper. “A huge indicator that they are just interested in someone for cuffing season, is that they want to have you around, but don’t make your time together, quality time.”

Cobey-Piper tells her clients to ask themselves, “Is it me they want to spend time with or do they just want somebody to hang out with, go out with, and have sex with?”

Rice tackles these and other tough topics on his podcast, recently touching on insecurities and “running game,” to help his listeners identify red flags and other warning signs that a partner may be actively seeking other prospects.

“The most responsible way to make [expectations] clear, is to be very clear [by saying] what you mean and mean what you say. I know that may sound cliché but it’s truly the way to go because a lot of us think we are clear with our words, but honestly our actions are speaking a completely different tune,” said Rice. “If you find yourself catching feelings, that’s cool, just let the other party know what’s up, and y’all might just make it past cuffing season.”