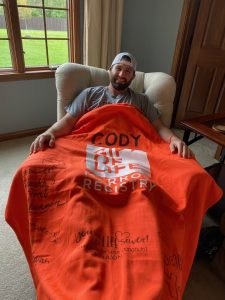 We could all use a story like this to warm our hearts after the tumultuous past few months. Even though the news cycle has been plagued with COVID-19 and protest-related content, we still need to take time to honor heroes in the midst of this crisis-laden year.

A Columbus resident and former Ohio University linebacker is one of those heroes that we should be giving our full kudos at this time.

In 2014, one of Grillot’s student coaches–who had leukemia–stressed the life-saving importance of joining a bone marrow and stem cell registry. So Grillot signed up on campus for the Gift of Life Marrow Registry–a nonprofit organization dedicated to saving lives by facilitating bone marrow and blood stem cell transplants for patients with leukemia, lymphoma, and other blood-related diseases. They swabbed his cheek for a possible future match and then Grillot went about his life.

“Every day, patients battling leukemia, lymphoma, and other blood-related diseases count on Gift of Life Marrow Registry to ensure they get the bone marrow and blood stem cell transplants at a time when every minute matters,” said Amy Glanzman, project manager at Gift of Life Marrow Registry. “While the coronavirus crisis has shaken every aspect of health care, we have been working to meet the challenges.”

Six years later, after Grillot had largely forgotten about his donation back in 2014, the Gift of Life reached out to him about a possible match: An 11-year-old boy battling Myelodysplastic Disorder, a disease that can occur when the blood-forming cells in the bone marrow become abnormal, needed his help.

“What made it all come together was making some calls to Gift of Life and actually reaching out to the James Cancer Center here in Columbus and getting set up to where I donate here,” Grillot said.

At first, Grillot was nervous about going through the process in the middle of a pandemic; but, ultimately, he wanted to keep the promise he made when he initially took that cheek swab.

“Essentially, what’s happening is the recipient, they’re going to be walking around with your DNA after your bone marrow is given to them. When that marrow becomes theirs, they share your DNA, they share your immune system (for the rest of their life).”

HIPPA privacy laws prevent Grillot from meeting with his donor for at least one year, but it’s something that the former football player is already looking forward to. So far Grillot is one of three swabbers at Ohio University to have saved someone’s life.

“I think that it’s getting really good exposure and the whole cause is a bit of an awesome thing because you really are saving someone’s life even though you don’t know who they are,” Grillot said. “It’s no different than if someone in your family was in this situation.”

The Ohio National Guard was assisting the Grove City location during COVID, but will end its help Aug. 7. At that time, the Food Bank is going to need your able body to volunteer again.

“As of August 1, we plan to bring volunteers back into our Grove City facility in order to maintain the levels of service and production necessary to serve those in need,” said Elizabeth Garrabrant, director of volunteer services at the MOFB.

Due to COVID-19, the Food Bank wasn’t able to have volunteers. Now, with safety precautions in place, volunteers will be allowed back at the Food Bank if they wear a mask while working and when around others.

The system is broken when children need to go to school in order to be nourished for that day. Even in uncertain times, the Columbus Metropolitan Library, along with other Columbus organizations, stepped up to fix a broken system.

The Summer Lunch program has been bringing Columbus-area kids meals between June and August since 2002. 2020 has been a bit different, however, in that we’ve seen the true giving spirit of Columbus organizations.

“Everybody really stepped up. This year, everybody's rolled up their sleeves to provide food.”

The CML–in partnership with the Columbus Recreation and Parks Department and Children’s Hunger Alliance–are once again supplying a much-needed service. CML usually partners with the Hunger Alliance for a snack program, though they recognized the need to supply meals en masse to students this year.

Columbus City Schools also served lunch outside of many of their schools during the months when students were out of school due to COVID-19. The Columbus YMCA partnered in feeding Columbus kids during school months as well.

Due to COVID-19, grab-and-go meals are to be eaten at home. Meals include either breakfast and lunch or lunch and a snack. Meals are available Monday-Friday for ages 1-18.

Summer Lunch will be distributed in the parking lots of these nine Columbus Metropolitan Library locations until Aug. 14:

Click here for a full map of available meals for kids.

$2.2 of the $17.2 million has already been allocated to 44 human services programs that were selected in 2019. The money is being used this year in place of the bed tax revenue, which was lost on not hosting major events this year.

The $15 million that remains will be used for human services COVID-19 support grants, in which human services programs can apply starting tomorrow. City officials will distribute the grants that will provide “access to residents’ basic needs as well as increasing the capacity of Columbus Human Service providers.”

In response to COVID-19, the city of Columbus received $157 million in funding through the CARES Act.