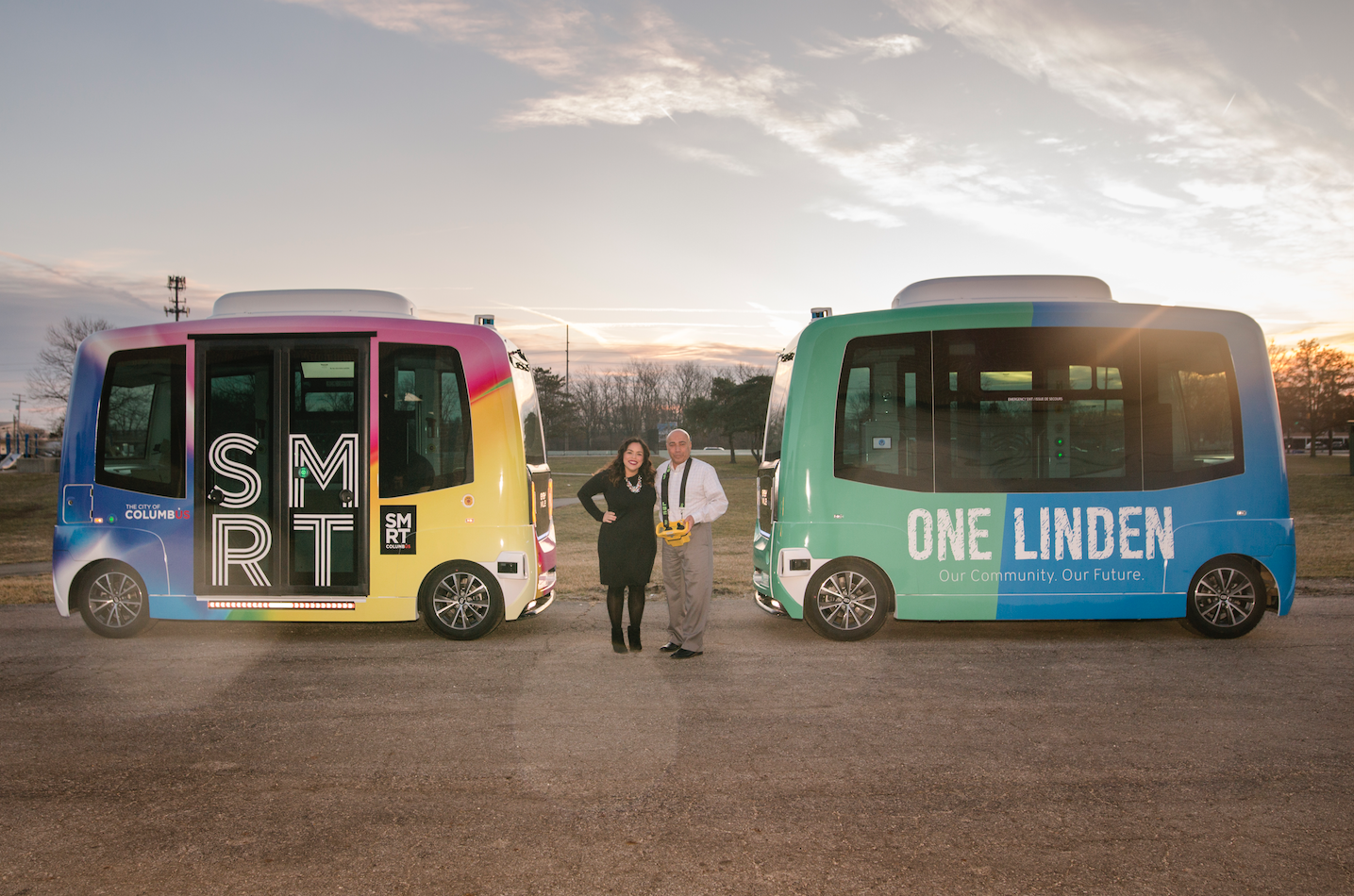 Aslyne Rodriguez is pitch perfect, though not necessarily in any sort of musical sense. Her passion for transportation innovation demands immediate attention in any room, and by the time she’s done making the case for bringing equity to employment through a tiny fleet of commuter buses, folks often find themselves singing the same tune.

But when she was handed the microphone at a gathering of stakeholders at Rev1 Ventures discussing the city’s ongoing efforts to increase economic inclusion, the set list suddenly changed. Instead of delivering her polished pitch on urban mobility to a capacity crowd, she was overcome by her own unlikely origin story. She reflected on her grandparents’ journey from Puerto Rico with only an elementary education, and welled up as she revealed her grandmother’s dream of opening a cake shop that never came to be. Raised near Youngstown, her parents both worked for the local school district—her mother a guidance counselor, her father a school bus mechanic. It was an early epiphany, realizing the parents of the kids who rode those same buses to school every day often struggled to get to work themselves, that would become the inspiration and driving force behind EmpowerBus.

“That was a raw moment. Something came over me and I needed to tell that story,” confessed Rodriguez, founder of EmpowerBus. “There are communities with the desire to be entrepreneurs, but they don’t have the pathway. Not everyone can do a friends-and- family round of fundraising for their startup. I’m only one generation removed from coming here with limited education and not knowing the language.”

What started with a single 25-passenger bus that shuttled employees from the Morse Road corridor to New Albany has in two years pivoted to a more nimble 14-passenger model with routes throughout Central Ohio, including the recent addition of an autonomous shuttle service in the underserved neighborhood of Linden as part of the Smart Columbus initiative. It wasn’t a contract she pursued, but one that found her based on a reputation of earnest intentions in a community that can prove short on trust after decades of disappointment.

“We have been loved by the community in a way most companies aren’t. But we’re still very careful about how we use the term ‘social enterprise.’ People think, ‘Oh, you’re a nonprofit and you do good work.’ ‘No, we’re a for-profit business that wants to do good work,’” she explained. “In some circles of Columbus, social enterprises are still misunderstood. We want to grow our business, and take care of our people. It’s how we expand to serve more communities.”

Like most midsize cities, Columbus wasn’t created for cars, but evolved to rely on them almost exclusively. Half a century of urban flight only amplified our cultural dependency on single-occupancy vehicles. Recent years have seen an overdue disruption in transportation, from Uber and Lyft to scooters and self-driving vehicles. But depending on any of those to get to work, an internship, or a doctor’s appointment reliably is dicey at best and undeniably cost prohibitive. For those of more modest means, the transportation revolution is still leaving them behind, and the face of who is left out is changing.

“Everyday in America, 10,000 adults turn 65 years old. They all don’t need shared transportation, but they may be taking care of aging parents who do—and they could soon too, or may just want to opt out of driving,” she explained. “They call it the ‘Silver Tsunami’. But people are also moving back into cities, they want walkability and maybe don’t want to have or need a car.”

The dynamics of demographics are changing all around. A relatively recent return to city centers has actually reduced the pool of potential employees for companies with warehouses beyond suburbia. Bus routes tend to cover the hours and destinations of those heading into downtown, not out of it. It’s a gap EmpowerBus closes, often cutting travel times by municipal buses in half with fewer stops, and with routes and a scope that have both expanded to bring employees in rural Licking county closer to Columbus, as well as transport employees from the Southeast side to destinations in Delaware.

“How do we get people to a job that helps them advance their lives? Workforce is still a central conversation for us,” Rodriguez noted. “Maybe they are working a job they can walk to that pays them $10 an hour, but maybe with transportation they can get to a job that pays $17 an hour with benefits and a 401k? That’s a big deal; it changes their lives.”

Mobility means more than just transportation, and Rodriguez is the first to admit her ambitions are audacious. Recent partnerships with Spectrum and Accenture will introduce an educational component to EmpowerBus during the ride with tablets as teaching tools. Second-chance employment for those exiting incarceration combined with low unemployment create a catalyst for hiring that wouldn’t happen without access to locations that are desperate for workers, but often in areas where they are in short supply.

“Smart Columbus prompted a broader conversation about workforce transportation. A lot of companies created ‘mobility ambassadors’ to discuss opportunities they wouldn’t have considered otherwise,” she revealed. “We’re also a logistics hub with a lot of manufacturing and distribution that happens here, and the market is tight. Employers are more open now to second- chance employment than they have been in the past. But how do those potential employees get to a job that allows them to restart?”

As with any startup, the future is where the rubber hits the road. Helping prospective employers identify “opportunity zones” based on their current workforce, or simply reducing the demand and cost for employee parking, illustrate the balance of creative and comprehensive solutions the company can offer— more than just in Columbus. Invitations to expand to cities elsewhere in Ohio, as well as surrounding states, show just how far and wide word has spread about EmpowerBus, its founder, and her dream. Aslyne Rodriguez moves people.

“The next step for EmpowerBus is to fulfill everything we set out to do and see what that looks like at scale. Our goal is to deliver upward mobility for all by providing dignified, reliable, on-time transportation to work, education, and healthcare,” she explained. “Expanding into another city and just scraping by isn’t a strategy. We’re a startup that has bootstrapped it so far, and we have to decide if we’re going to go big or grow incrementally. But for now, we’re investing in our people and processes, so when the time comes to scale up, we’ll be ready.”