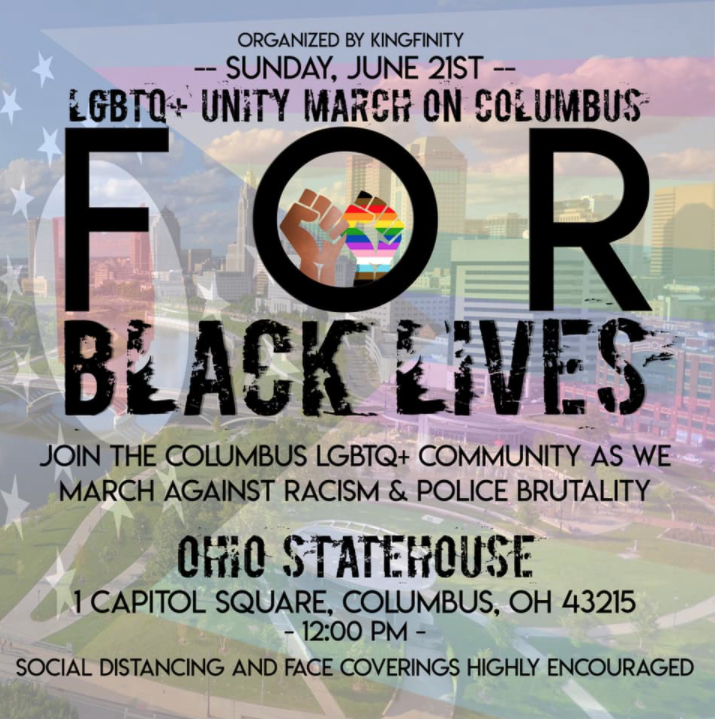 This weekend would’ve marked the celebration of the annual Columbus Pride Festival. And while the Pride parade has been postponed to Oct. 3, nothing is stopping the LGBTQ and black community from making sure their voices are heard this month, this weekend, and, especially, tonight.

As many leaders in the black and LGBTQ communities announced an alignment with the Black Lives Matter movement for Pride Month, there are a handful of marches that will be taking place in Columbus over what would have been Pride weekend. This weekend is even more significant to those that are black and LGBTQ with Friday marking the celebration of Juneteenth, an American holiday celebrating the end of slavery that occurred on June 19, 1965, in Texas.

If you want to have your voice heard over this very special weekend, below you can find some marches that will be taking place in a neighborhood near you starting tonight.

Hosted by Black, Out & Proud, a march will be held starting from the Columbus Division of Police department, located at 120 Marconi Blvd., at 6 p.m. to the Maroon Arts Complex on Mount Vernon. It will be a celebration of black LGBTQ people but all are welcome to join in marching together.

Black-owned clothing brand Kingfinity and the LGBTQ+ community is asking you to come out on the day of what would’ve been Pride and join the march against police brutality and racism. The march will begin at noon from the Ohio Statehouse, located at 1 Capitol Square.