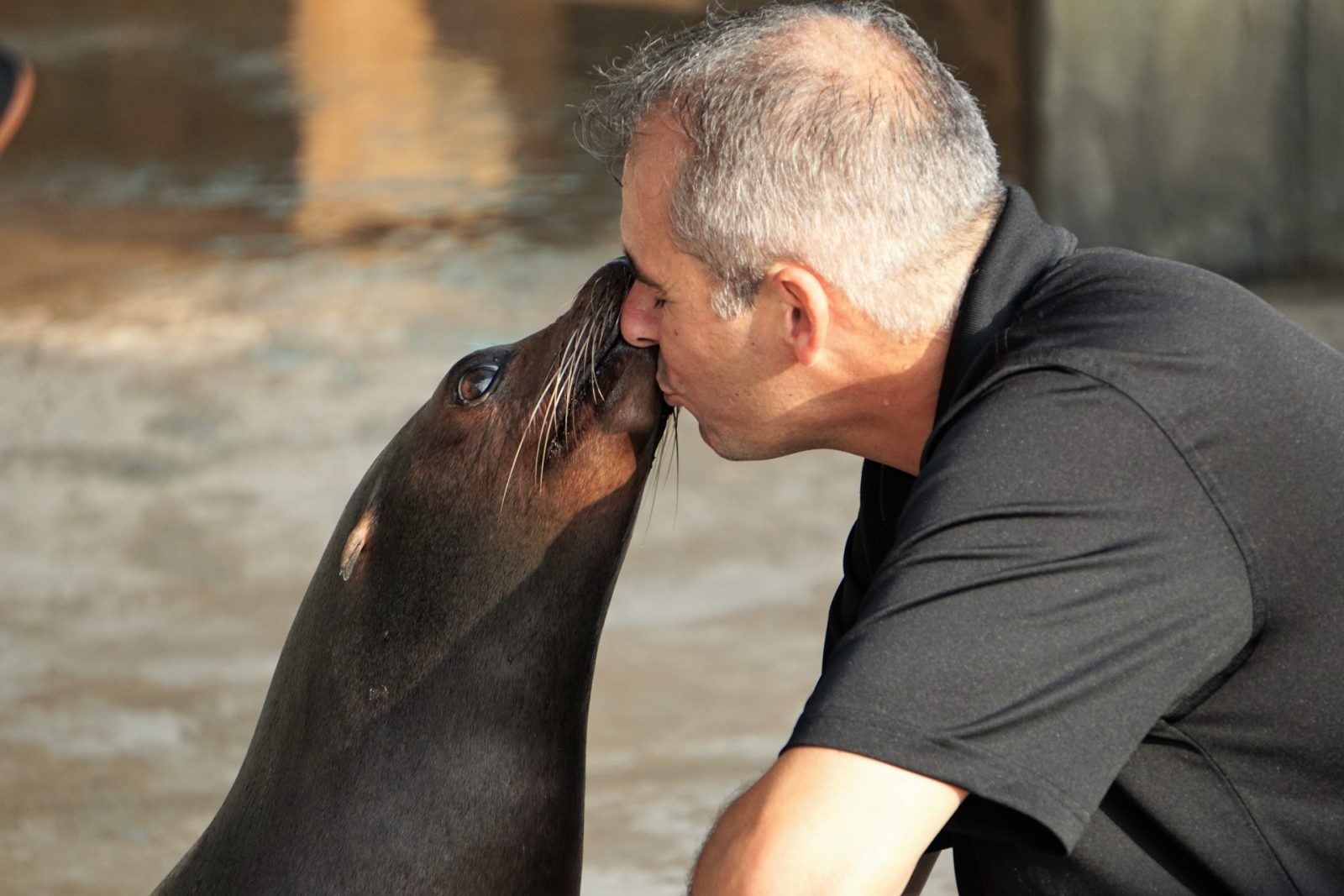 Pablo Joury, director of the pinnipeds program at the Columbus Zoo & Aquarium, reaches for a fish. As he grabs the fish and cocks back to throw it into a medium-sized sea lion pool, 20-year-old Ayla dives gracefully without hesitation into the pool, chasing the fish as her snack.

Snack finished and back on land, Ayla steps up onto a rock-like platform, giving multiple lip-to-lip kisses to Joury. Those in attendance gushed.

This scene at the grand opening of the Adventure Cove, a passion project of the zoo since Jan. 2016, isn’t always a common occurrence between zoo trainers and their animals. The relationship between Joury, Ayla, and the other Adventure Cove sea lions (Bodega, Simba, Toby, and Banana among them), is the result of the Columbus Zoo and Aquarium’s longtime devotion to sea lions and the two years that Joury’s team spent in Florida preparing the animals for transportation to Columbus.

Ever since falling in love with a sea lion exhibit in France at the age of 6, Joury has spent much of his life dedicated to studying and caring for sea lions. Two years ago he made the leap over to the United States to join the Columbus Zoo and Aquarium.

“I know no place like that in the world for sea lions and seals,” Joury said. “I think it’s paradise. There is nothing like that all around the world.”

Something that the Columbus Zoo & Aquarium does particularly well is listening to their guests and responding accordingly. When zoo employees heard that its guests wanted more attractions at the front of the park and at the same time expressed an enthusiastic love for sea lions, the idea for Adventure Cove was born.

“Sea lions are very, very social animals…so when they set out to relocate these animals, they were diligent about placing them with a responsible organization,” said Suzi Rapp, vice president of animal programs at the Columbus Zoo and Aquarium.

As COVID-19 requires social-distancing in public spaces, this a perfect time for guests to reconnect with the natural world without getting too close to other people. While guests walked through the tunnel for the first time, sea lions would boop their noses on the glass at the sight of humans, a sweet sign that they missed human interaction.

“As I was walking through and being the only one here, they would pop up and wonder what in the world was going on. So I think they missed us, you know, and I’m really glad to see our guests back in and being able to enjoy themselves,” said Tom Staff, president and CEO of the Columbus Zoo & Aquarium.

The $40 million indoor tunnel exhibit holds approximately 375,00 gallons of saltwater, runs 60 feet long, and has three miles of pipes underneath to ensure that the sea lions have the highest quality living environment.

“I’ve been in this business 40 years, I’ve been to zoos all over the world, and I’ve never seen an exhibit that touches this one,” Rapp said.

Another addition to the front of the park includes an homage to the man who will retire from the Columbus Zoo & Aquarium at the end of the year. Jack Hanna’s Animal Encounters Village is an indoor-outdoor exhibit that will feature a rotating cast of 80 animals. Recently, guests were greeted by lemurs, toucans, capybaras, and two cheetahs born by in vitro fertilization transfer, the first of their kind.

Although the Columbus Zoo & Aquarium is very excited to be inviting guests back, it did take a major financial hit because of COVID-19. Unlike restaurants and bars, the zoo could not serve guests but still had to employ people to enrich and care for the animals.

There is still hope, however, once we are free from the COVID cloud due to how much the Columbus Zoo & Aquarium means to the area.