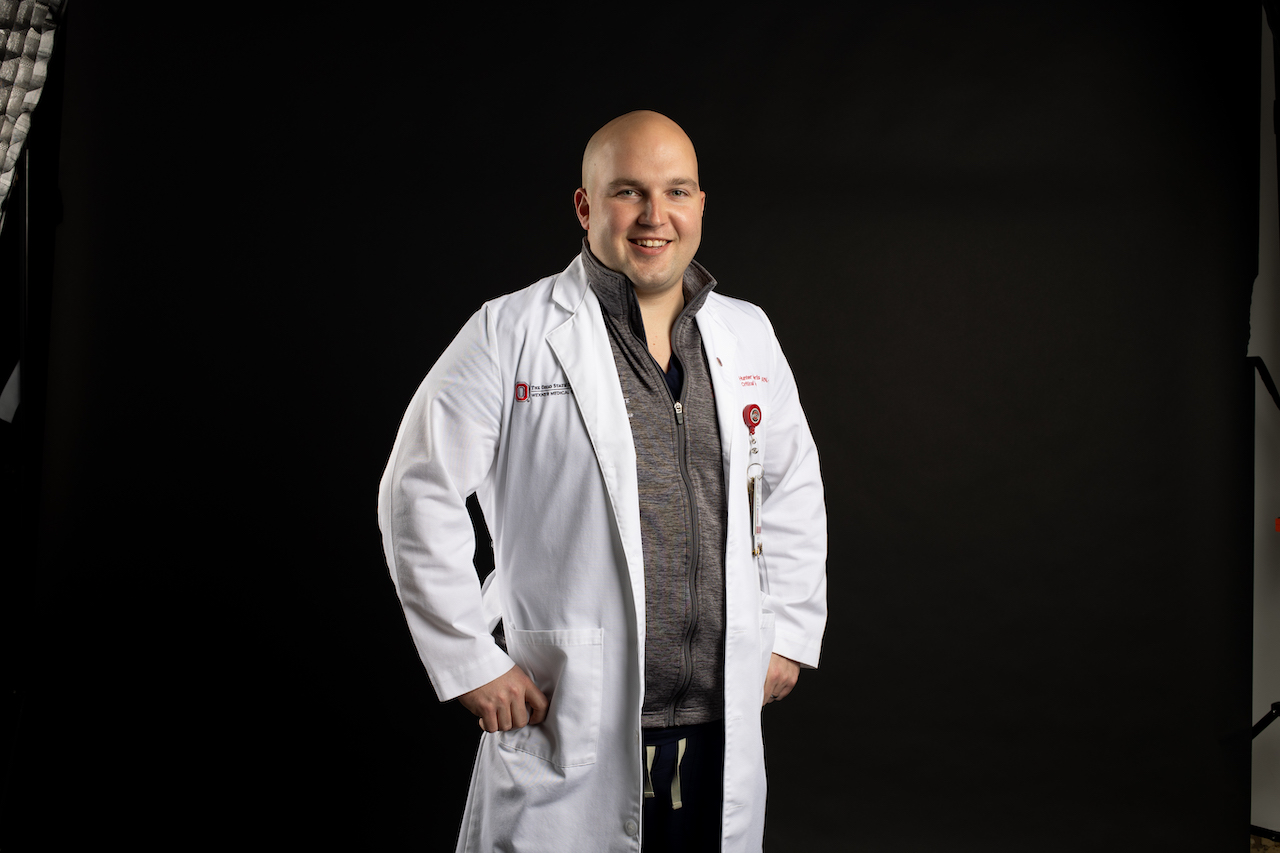 It’s hard to argue that anyone had a greater impact on their communities in 2020 than the nurses on the front lines of medical care. Here, we profile four of Columbus’s everyday heroes.

As a former bedside nurse and now a nurse manager, Jefferis has seen dozens of pulmonary and respiratory viruses. But this one in 2020 was different.

“I started to see how fast the ICU was filling up, and how contagious this was,” Jefferis said of the COVID-19 pandemic.

He realized this was no normal respiratory virus. By the end of April, all of OSUWMC’s 48 ICU beds had COVID-19 positive patients in them, and infected patients were spilling over into other areas of the hospital.

“My job is to support the nurses who are supporting the patients,” Jefferis said. “We developed a way to bring IV pumps out of the rooms, to save PPE, and reduce risk for our staff.”

Because of disease containment protocols, all of the glass ICU doors have to stay closed at all times now. Nurses can’t come and go quickly like they’re used to doing. Jefferis’s teams also had to come up with innovative ways to communicate from inside the room to outside the room, especially in emergency situations.

Jefferis’s wife was pregnant with their second daughter while he was putting in 60-hour work weeks to respond to the emerging pandemic and returning home occasionally to see his family.

“We were fortunate to receive benefits that put staff up in hotels to keep our families safe until we knew more,” he said.

But the hours that everyone continues to put in have proven to be challenging.

“[The nurses] are putting in a lot of time, and they’re also taking on a lot of emotional toll,” Jefferis said.

In spite of this, the nursing staff has supported their own.

“While this has been a terrible pandemic, one positive thing that has come out of it is the nurses’ dedication to each other,” he said.

“It was eerie, like the calm before a storm that never came,” Johnson said. “Kids weren’t getting sick, because kids were staying home.”

But when places opened back up, everything changed.

“Now, the numbers are skyrocketing among children,” she said. “Kids are still getting hurt— all the normal things, only now we have this added layer where every kiddo that comes in with a cough, we have to swab.”

Families have presented some of the biggest challenges.

“Unfortunately, there was such a back-and-forth in the media [about children’s susceptibility], that we have parents who are deathly afraid and parents who think it’s no big deal, even with positive test results,” Johnson said.

“So education is our biggest component—what to look for, whether they should be quarantining—and also putting on that brave face. When the vaccine comes out, we’ll be taking it and setting the example,” she said.

Johnson also sets the example for her four children, talking openly about the things she does to keep herself safe.

“They take their cues from me. Anything that I worry about stays at the door,” she said. “Fear is not going to get us anywhere, and I’m not going to let them be afraid.”

But Johnson manages to keep a positive attitude.

“When I leave my shift, it’s like when you’re holding your breath and can let it out, knowing there was nothing we couldn’t manage today. We did it,” she said.

“If you have to go in a room and intervene, you have to have your PPE and everything right there on hand,” he said. “We have all the resources in place, and we even have our own personal respirators now.”

And more than ever, with new negative-airflow rooms and strict safety procedures, nurses are starting to have to step into more roles.

“Housekeeping’s actually falling on us a lot,” Cline said.

Because of the visitation restrictions, nurses are finding themselves with a new logistical challenge: Acting as surrogate family for patients in all types of medical situations. Cline once used his personal cell phone to FaceTime a patient’s family, because the hospital was having difficulties with its own resources and the conversation couldn’t wait.

“You have to be a liaison that can actually portray how patients are doing,” he said. “To tell family members the real, honest truth about which way things are heading—it’s hard. It’s really difficult. More than anything, that takes an emotional toll on you.”

To decompress from the physical and mental strain of hospital work, Cline focuses on his own health.

“Take your vitamins, keep working out,” he said. “That’s probably the best thing you can do as far as decompressing, and also to prevent getting sick.”

Cline admits that he looks forward to the day he can safely see his parents again. In the meantime, he acts as an advocate with friends and family.

“People respect me. A lot of them have said things like, ‘I didn’t realize things were this difficult inside the hospital; maybe we need to cut back on Thanksgiving this year,’ or they wear masks more after I tell them how it is.

“Ultimately, we’re trying to get everybody to realize that this isn’t a joke.”

The previous year’s changes in hospital procedures have been quite an awakening for many nurses.

At first, the ICU nurses at St. Ann’s didn’t know what to expect from the novel coronavirus. But Thomas felt ready, as she waited for their first patients.

“We have patients with different, challenging diagnoses all the time. You know that things are going to be introduced that you have to figure out. So just like we would figure one of those patients out, we were doing the same thing here,” she said.

There was still a lot of anxiety though, she said.

One positive outcome of this year’s myriad changes is a platform in which nurses, as well as other medical professionals, are able to promote preventative health.

“There’s been a big focus on handwashing and sanitizing, which are great things to promote moving forward,” Thomas said.

While nurses provide patients with physical support, they also provide emotional support to patients who don’t have families at their bedside. It’s demanding, but Thomas never second-guesses her career choice.

“There’ve been shifts where you have to sit in the car and pull yourself together before you go into the hospital, but then you get there and realize, ‘this is why I became a nurse.’ It’s all about helping people feel better,” she said.