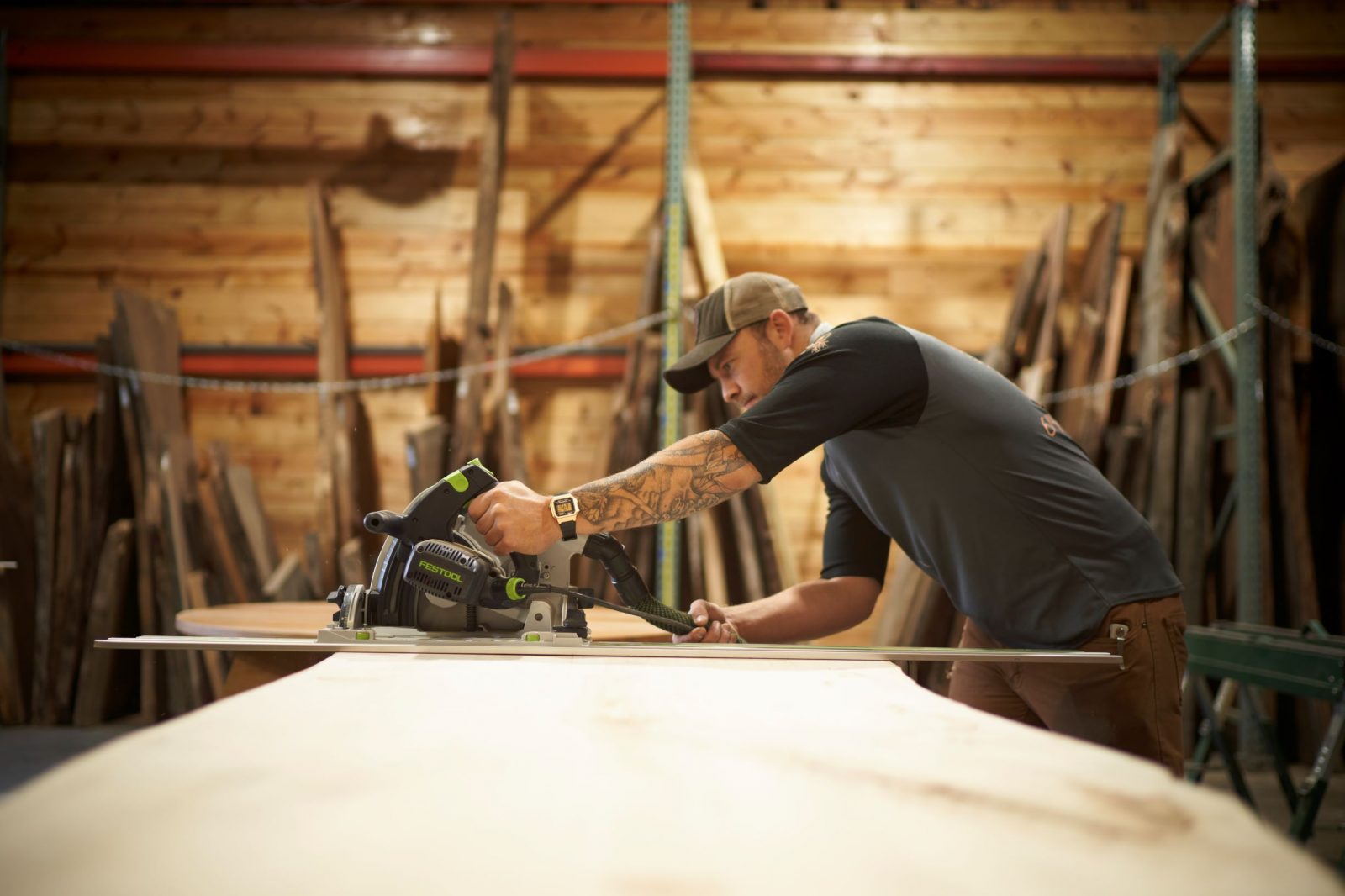 (At) home for the holidays: our favorite local options for carryout Thanksgiving feasts

On a rainy, gusty day in the Linden area, the sound of a power sander echoes out of the wood shop at Trees Are My Business. Alex Berggren, a sawyer and woodworker, has six or seven projects in process, among them an Osage orange workbench top, a round table with angled legs, and a hefty walnut bar top.

The items are ready to be sanded and finished. Some will get epoxy fillings in natural voids, the color selected to enhance grain and character.

Berggren started woodworking early in life—he digs out a large steel clamp and a photo of himself as a three-year-old with that same clamp and a tiny workbench he still uses occasionally. “I got voted most talented artist in my senior class, and I definitely don’t think I was,” he laughs.

He earned a degree in criminology at the Ohio State University, then joined the Coast Guard. After leaving active duty, he worked in security for the Columbus Zoo & Aquarium. Eventually, he left law enforcement, connected with his friend Anthony Provenzale, owner of TAMB, and began a partnership.

All of the wood Berggren uses is reclaimed from TAMB’s tree removal projects—mostly walnut, cherry, oak, maple, ash, and elm. “You won’t see any exotic woods in our shop, like mahogany. It’s all Ohio wood,” he says, gesturing to bays full of giant slabs.

TAMB arborists identify the best logs to return to the shop, where Berggren mills them. The wood typically air-dries for nine months to a year, then kiln-dries for another one or two months. “Drying wood is the biggest challenge, because of the time involved,” Berggren admits. “You can’t just cut wood and work with it the next day.”

Berggren sells all types of furniture made from the reclaimed wood. But the most meaningful pieces are what he refers to as “full-circle” projects: TAMB removes a customer’s tree; he mills and prepares the wood, stacks it, and returns it to the customer for air-drying. When the wood is ready, he retrieves it and builds the customer an heirloom-quality, custom piece, completing the circle.

In the front corner of the shop stand three thick slabs of silver maple, ready for their metamorphosis.

Years ago, Jennie and Greg Sheldon decided to honor the memory of Greg’s father by building a sunroom onto their Dublin home. As the sunroom grew, the maple tree that provided shade in summer became problematic enough for removal.

“I said to my husband, ‘I would really like to make something out of the tree, so the tree doesn’t just die,’” Jennie recalled. The couple decided to commission tables for the sunroom.

They stored the wood at Jennie’s brother’s farm and visited it often. Greg’s ideas for the wood blossomed, while his body and cognition began slipping into decline. After countless doctor visits, he was diagnosed with Creutzfeldt-Jakob Disease and handed crushing news: four to six months life expectancy.

His final goal was reaching his 55th birthday. Family and friends re-furnished the sunroom as a gift, but the maple slabs were not ready. Greg passed away at home in May. Now, these silver maple tables will carry extra meaning, a tangible bond between husband and wife as well as between family and home.

A Place of Honor

“I always joked, ‘If something happens to those trees, we’ll move,'” Laura said.

Then, in June 2020, a storm sent one crashing into the house. “It sounded like a freight train,” Bill recalled. No one was hurt, but the damage was devastating.

The Bruces discussed making turned bowls from the tree, but when cleanup started, their plan changed course. Berggren visited the site and was equally devastated by the loss. Now, slabs of locust wood are air-drying, and next year, Berggren will make the Bruces and their three adult sons each a commissioned piece of furniture to remember and honor their beloved sentinel.

Part of the Team

Provenzale, a certified arborist, is thrilled to have Berggren as part of the team. “I liked the woodworking aspect of [tree service], because I see so much cool material being turned into mulch. It was about strategically finding the right partner. I gave Alex a slab one day, and I watched him bring it to life, and I was like ‘Let’s buy a mill together.’”

Berggren considers every day a learning opportunity. “It’s fun finding out about the different woods, why they are the way they are,” he says. “The tree crew guys are extremely knowledgeable, so I’m always asking ‘well, why is it this way?’ So many woods have different characteristics, like density and coloring, and I’m always learning. And I love connecting people to the trees they love.”