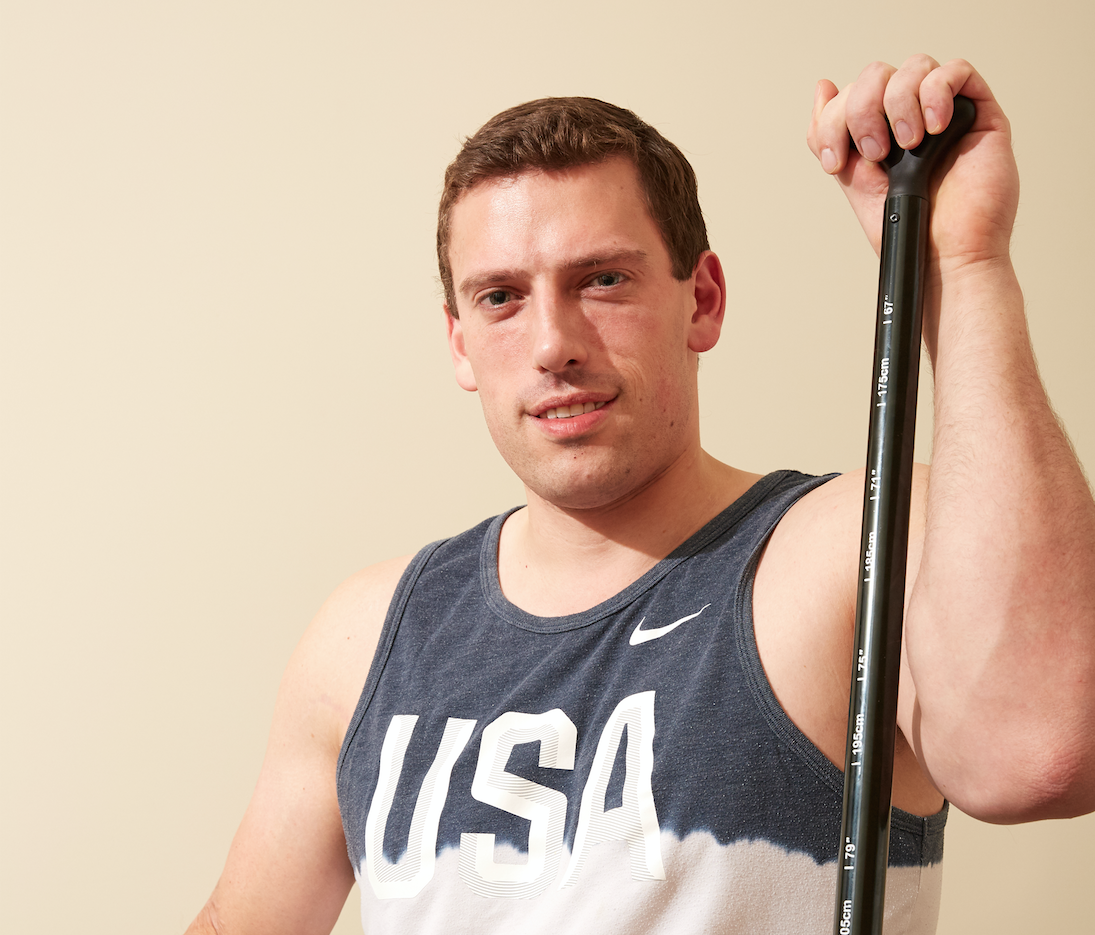 As a senior and the captain of the crew team at Upper Arlington High School in 2009, Blake Haxton was making plans for the future. Then came a moment he couldn’t have planned for. In March, he developed a cramp in his leg that quickly turned far more severe; Haxton had contracted the flesh-eating disease necrotizing fasciitis. Within days, the illness led to organ failure, and Haxton was in danger of losing his life. To save him, doctors made the decision to amputate both of his legs. Ultimately, it took more than 20 surgeries and three months in the hospital before Haxton returned home.

Haxton shared his worries during his long recovery. “I remember being in the ICU still. […] I was starting to project forward, ‘well, what’s life going to be like now?’” He worried about what he would be able to do, and what he would miss.

Although many of his hospital visitors encouraged him to try para-rowing, he was reluctant. “I knew what the process would be; I just had no desire to do it,” he said. His resistance to rowing stayed with him when he was discharged, and throughout his undergraduate years as a Finance major at Ohio State.

His attitude began to change as he prepared to start law school. “I really haven’t been that active for four years. I need to be an adult and figure out, you know, just a way to work out and train and be healthy,” he said. So he returned to the ergometer—known as “the erg”—an indoor rowing machine. Still, it wasn’t what he was used to, and he didn’t enjoy it at first. “It felt so abbreviated and cramped,” he said.

It took a shift in his mindset to change his relationship with the erg. Haxton began thinking of para-rowing as “an entirely different sport” from what he’d done at Upper Arlington.

When he let go of those expectations, Haxton discovered that he was good. Really good.

Haxton signed up for a competition called the Indoor World Championships, where rowers competed on ergs in the same room, pulling as fast as they could.

Then the U.S. National Team approached him about trying out. “That’s what got me back in the boat,” Haxton said. He calls returning to the water “one of the best decisions I ever made.”

In 2016, Haxton qualified for the Paralympic Games in Rio. He said that life in the Olympic Village isn’t as glamorous as it might look from the outside. “You’re pretty isolated,” he explained. Getting sick would be detrimental in races where tenths-of-seconds matter, so athletes keep to themselves and try to stay focused. “You don’t really get out of that loop of just training, sleep, compete. And you don’t really want to,” Haxton said. He ultimately placed fourth, “which was about as good as I could have done.”

Now 28 years old, Haxton is in his prime

years by rowing standards (male rowers are generally considered to peak between ages 28-32). He finished seventh in the 2019 World Championships, qualifying the U.S. Men’s team for a spot in the Tokyo 2020 Paralympics. Under the rules of U.S. Men’s Rowing, however, there’s still an individual qualifying race to determine who will compete. Haxton is spending his winter training for the race—and what he hopes will be his second Paralympics— with weights and on the erg. When the weather warms, he’ll return to practicing in the boat.

In addition to rowing, Haxton works full- time as an Investment Research Associate at Diamond Hill Capital Management. “We divide up the market of publicly traded stocks by industry,” he explained, investing in opportunities that may have been overlooked or undervalued elsewhere. Haxton specializes in airlines and oil and gas, and calls the work “a ton of fun.”

Unsurprisingly, Haxton is a busy man. With a twice-a-day, six-day-per-week training regime on top of his job, his schedule doesn’t leave him with much wiggle room or social time. “There’s some wedding invitations you have to turn down,” he said.

On the other hand, Haxton is thrilled with how he gets to spend his days. “A lot of people don’t get to say they like any job they have. I have two jobs I really like—rowing and investing—and I get to do both of them every day. What could be better than that?”

Even so, he becomes introspective when asked about the moment he knew that his path, as an athlete and businessman, was the right one for him to follow. “I’m not really sure it is,” he said. “I couldn’t answer honestly saying, like, I think that ‘Blake Haxton’s purpose on this planet is rowing or investing.’ I don’t know the answer to that question. And I do think we all have a purpose… and I think that the talents we all have are hints about what that purpose is.”

Haxton, someone who has been through— and accomplished—so much in his 28 years, expresses tremendous gratitude for the way he gets to spend his life. He’s grateful for his friends who have made his path as an athlete

possible. “I can’t carry my boat on my own, can’t do a lot of travel on my own,” he said. “There’s a really core group that’s around that enables me to do all these things.”

Haxton has a true village of friends in Columbus and across the country who are intrinsic pieces in the puzzle of his athletic success. Members of his village will wake at 5 a.m. to join him on the water and help him practice. They will use their vacation time to drive him to competitions in other states. And not only will they do so without complaint, they share his excitement. “There’s not one trip […] where we don’t look at each other and be like, “‘man, how cool is this!’” Haxton said.

His positive attitude and his self- described “stubborn” dedication as an athlete were undoubtedly behind his U.S. Rowing teammates voting him the 2016 Male Athlete of the Year. Haxton is the first para-athlete to receive the award, and he’s humbled by it. “It’s the greatest honor I’ve ever gotten by a long measure,” he said.

Even in the hardest times, Haxton has learned to be “willfully grateful.” He points to that moment when he was still in the ICU, as he wondered what the future would hold for him as a double amputee. His fears and worries began to snowball as it sunk in that his life was forever changed.

And then he looked up and saw his mom sitting in the corner of the room. The moment was a revelation.

“I realized how true it was, that as bad as this is, it would be so much worse if my mom wasn’t here,” he said. “In that moment, it was like the snowball stopped rolling.” He began to think of the other visitors coming that day—his dad, grandpa, and brother. “I sort of found that it can snowball the other way,” he said. “I was surprised by how powerful that was.”

Haxton knows firsthand that life comes with real difficulties. He says the hard moments need to be confronted, not “swept under the rug.” Still, he focuses on the people around him and the support they provide him as an athlete, colleague, and friend. “When you get to go through life with teammates like that,” he says with a smile, “it’s pretty good.”