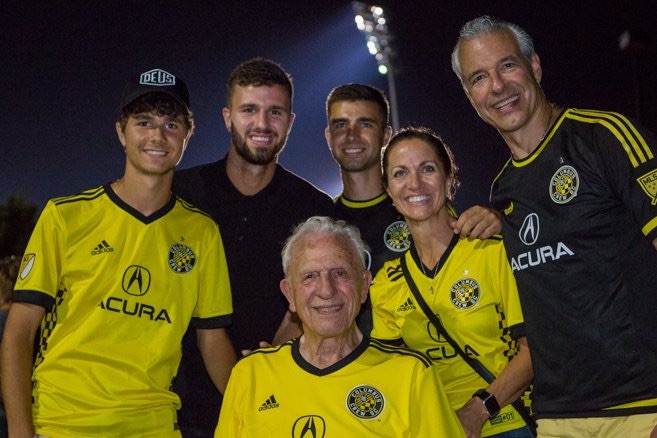 He’s a celebrity to Columbus Crew fans, but he didn’t even watch a soccer game live until he was in his late 70s or early 80s. Now those same Crew fans have a chance to wish Henri Crognale a happy 100th birthday.

Crognale, grandfather to former Crew player Alex Crognale (now with Birmingham Legion FC), earned his fame through his gregarious support of Alex’s teammates and the warm hugs he shared with them before the game.

Originally, the World War II veteran planned on holding a birthday party Saturday with 150 guests at a local VFW.

While COVID-19 has wrecked his plans, it has given the wider community a chance to recognize Crognale’s contributions as a former member of the Coast Guard, a carpenter, a father, friend, and fan.

His daughter-in-law, Karen Crognale, is organizing a campaign to have Henri receive birthday cards from all those who have fallen in love with his affable smile and zest for life. You can join the campaign here:

Crognale says he is already receiving 5-7 cards a day from all over the country.

There is an additional effort underway to organize a parade of sorts through Crognale’s neighborhood Saturday. Details are available here for those interested in participating:

The family is also asking people to consider giving to Honor Flight Columbus, an organization created “to honor our nation’s senior veterans with a trip to Washington, D.C. to visit their war memorials at no cost to them.”

Crognale voluntarily joined the Coast Guard shortly after the attack on Pearl Harbor Dec. 7, 1941. He ended up serving there himself, working in port security. He was later shipped to the Hawaiian island of Kauai to perform a similar role there. Following that came duties on a Coast Guard fireboat.

After his military career, he went home to Warren, Ohio, worked in carpentry and raised a family, including the aforementioned grandson who spent time with the Black and Gold.

Before the pandemic, Henri would wake up every day at 6:30 a.m. to meet a group of around two dozen regulars at McDonald’s for breakfast. He’s been unable to meet with that group of friends, and the man famous for his hugs hasn’t been able to share one for a while.

However, that hasn’t dimmed his enthusiasm. When asked what his favorite memory of the past century has been, he had a quick answer: