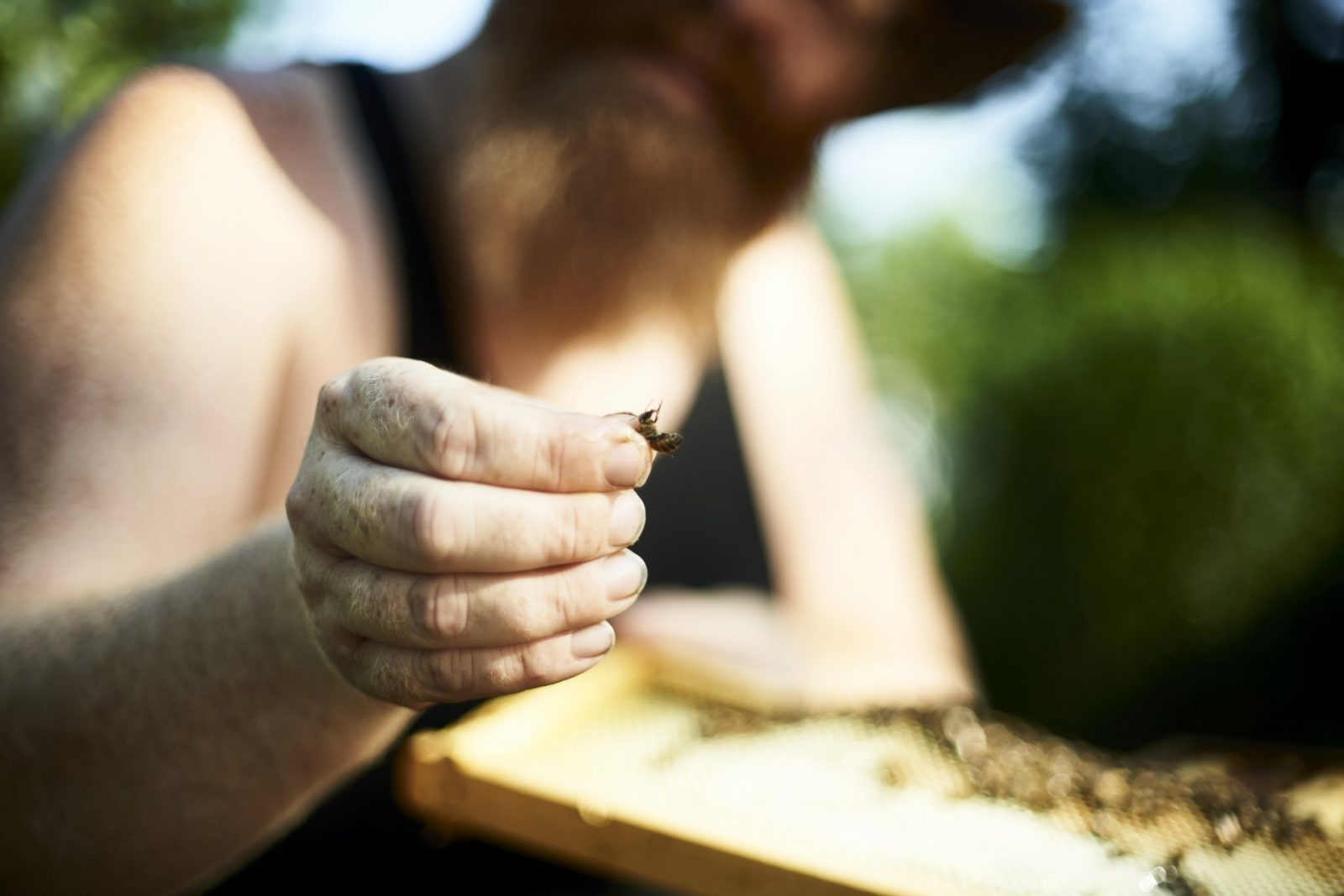 Danger lurks at intersections: Columbus is a hotspot for car crashes

Local school, with bee whisperer instructor, sells out classes as the hobby increases in popularity

In just a black undershirt and a weathered canvas hat, Dave Noble begins to meticulously sort through the seven brightly colored beehives located on site at the Columbus Garden School. After several minutes—fingers stained with honey, insects curiously zipping in tight circles around his unguarded face —Noble remains unphased. He isn’t stung once.

“It takes a certain sort of calmness. You’ve got to give yourself over to the bees,” Noble said, resonating a cool easiness in demeanor that’s occasionally spiked with an unfettered passion for bees when the topic arises.

After roughly 20 minutes of carefully stacking and restacking the wooden layers of several different beehives located within the school’s diverse demonstration area, his energy changes. His posture quietly stiffens. He finds what he’s been looking for.

One bee, noticeably larger than the others and with a noticeable gait, emblazoned for identification with a tiny dot of turquoise so small it’s almost invisible,is the queen. He picks her up gingerly to examine her closely.

Later in the day, he plucks a drone bee—male bees whose only purpose is to mate with neighboring queens—from the hive, holds it between his thumb and forefinger, and genuinely thanks it for its sacrifice. Giving it a quick squeeze, Noble points out the drone’s genitalia jutting out the back of its abdomen, eviscerating it in the process. “Mating for drones is fatal, as you can see,” Noble said. “He has an endophallus, meaning he has to break open to mate.”

Standing about 15 feet behind Noble’s imposing 6 and a half foot frame and electric auburn beard, everyone watches as he carefully arranges hive segments. The distance provides a certain feeling of safety. After all, it’s quite reasonable to be afraid of being stung when confronted with dozens of bees. But as the day wears on, watching Noble handle the insects without incident, unease gives way to enjoyment and fascination.

The best part of this amazing experience may be that it’s entirely repeatable. Noble is a contracted instructor at the Columbus Garden School, tasked with teaching a vast assortment of honeybee-related courses, all of which, prior to COVID, would sell out quicker than they could teach them. Now that the courses are virtual, there are more openings available for anyone interested in the popular hobby.

The finding of the Queen Bee is, in fact, one of the more popular courses taught. It teaches how to locate queens and approach the hive, how to handle bees, and how to stack hive segments in a particular order to prevent the queen from wandering into previously searched sections.

“You’re going to have to either raise your own queen or buy one,” Noble said to new beekeepers, making this course both in high demand and critically important.

The wild and wholly riveting course on queen-finding that Noble teaches at the school is not his only involvement with his beloved bees. He also raises queen bees for sale, producing upwards of 25 weekly from his private hives, and sells comb-extracted honey from home.

Tisa Watts, who founded the Columbus Garden School in January of 2019, also gets in on the buzz about beekeeping. She teaches a course on native bees, a topic that includes hundreds of different species, from microscopic wasps to the sleek and dusky Mason Bee.

Part of her course walks students through the construction of a dwelling for native bees, crafted by forming a network of PVC pipes. While building a home for native bees won’t yield honey, the variety of species they attract is worth their construction. Ultimately what Watt loves about the class and the school she founded is its value in creating awareness.

“It really helps people connect with all of the amazing things in the world around them, in the world right in front of them. And that’s what we’re after,” she said.

The Garden School offers more than just bee classes, though. There is an immersive, eclectic slate of hands-on courses paired with two acres of demonstration garden that cover subjects such as native plants, herbalism, raising chickens, outdoor construction, breakmaking, and more. In response to the pandemic, the school is now offering a vast array of reduced-price courses with top-notch instruction which can be attended virtually.

Of course, one cornerstone of the school is, and will continue to be, Dave Noble’s beekeeping courses.

“There’s nobody else like him in all of Central Ohio,” Watts said.

Noble entered the world of beekeeping academically, after studying honey bees at Ohio State and obtaining a degree in plant pathology with a minor in Entomology, he went on to work in the school’s honeybee research labs. With experience as an apiarist for several local institutions, Noble also speaks internationally about bees.

As an instructor at the Garden School, Noble has adopted a measured, adaptive approach to teaching beekeeping, due to the expansiveness of the subject. While the school is  still overtly beginner-friendly, with an introduction to beekeeping regularly offered, Noble aims to tackle an array of topics in depth through hyper-focused course offerings.

There’s no one like him, certainly, and Central Ohioans who take his course are lucky to learn from the best.

“I take the all or nothing approach as an educator: if you try to teach it all, you end up teaching nothing,” he said.

Editor’s note: This story corrected the list of native species of bees.