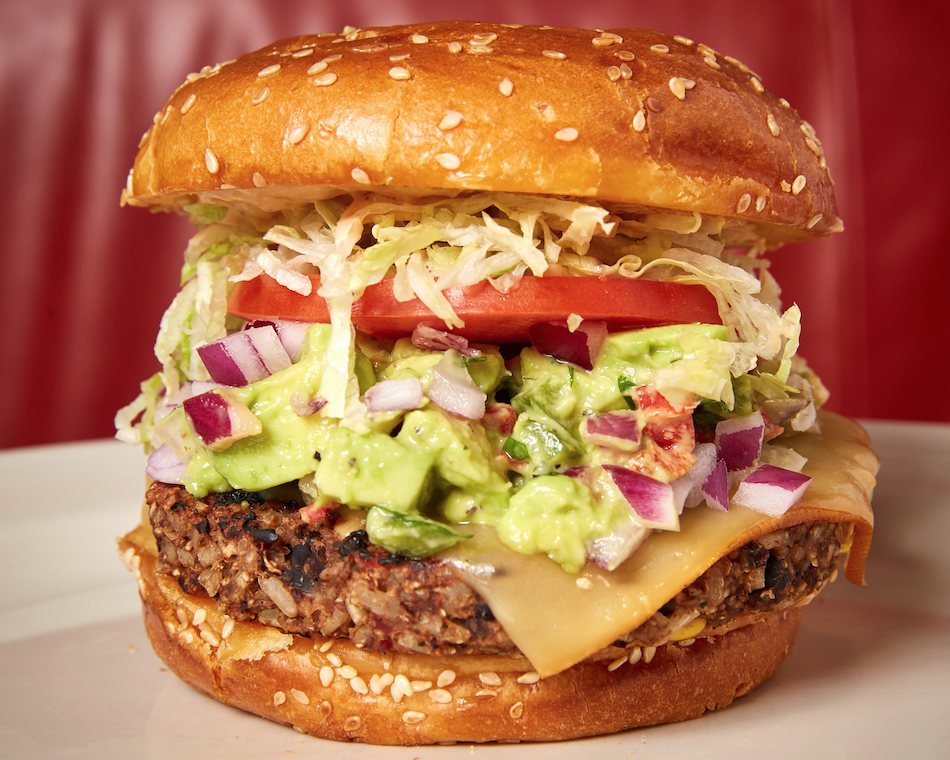 I raised Holstein dairy feeders growing up and fell in love with the cows and the process year after year. I worked hard to nourish, groom, and train them to be fit for show, but I worked harder to push the thought of them becoming steaks out of my mind. In hindsight, I realize I had an important job: to ethically and responsibly raise beef to be processed and consumed.

I believe animal agriculture is important to many peoples’ lives, not to mention livelihoods. However, I also realize the importance of introducing plant-based proteins into our diets to safeguard the future of our planet. In short, I am very much an omnivore—eating more veggies than meat but never willing to turn down some beef jerky. It’s served me well in life for many reasons: my protein variability, dietary flexibility, etc. But recently, it’s presented the opportunity to explore the remarkable and noteworthy changes in the burger scene in Columbus.

Eating green is trending right alongside the city’s awareness about sustainability. If you spot a classic cheeseburger on a restaurant menu, odds are it has a plant-based counterpart. But, how do they stack up? Can a meat burger really be compared to a plant- based patty? If so, which is better? Well, folks, I do believe that after consuming eight different burgers in one day, I have answers to all your questions and more.

The Northstar Burger is arguably the tallest pillar in the local veggie patty community. It’s been perfected over the restaurant’s 15 years of existence to ensure only the best finished product is handed over to the customer with that signature Northstar hospitality. I’ve let Earth Day after Earth Day pass me by without getting my hands on a free Northstar Burger, so I went into this experience as a first-timer—I finally tasted what all the hype was about. The black beans + brown rice + beets patty is moist and billowing at the bun with smoky flavor that complements the white cheddar cheese. The earthy beet taste pairs well with the burger’s kale, tomato, pickle, and onion toppings. I think it’s safe to say Northstar has created the standard to which all veggie burgers should be held.

The classic beef buddy made its way onto the menu when Northstar Easton hit the scene and has been superbly received ever since. Niman Ranch provides the brisket and chuck for this ground-in-house-daily sandwich. Coming as no surprise, the Classic Cheeseburger is just that—a classically juicy, savory, and perfectly greasy cheeseburger. The chewiness of the beef and the crunch of the veggie toppings create the perfect bite every time. Bonus points for that gorgeous cheese melt!

Well, well, well, White Castle, we meet again, except this time, I’m sober. Northstar is a damn-near impossible act to follow, but I tried my best to keep it in perspective as I held the fun-sized- sandwiched between my fingers. “I could find enough change on the sidewalk to buy this sandwich,” I reminded myself as a single onion shaving fell onto my lap. I took a bite. “Hm,” I thought. “I wonder if there’s any room on the crave train.” While moist beyond my personal preference, the quality of the burger is right on par with the price and for that reason, I’m in (Shark Tank tone).

It looks, sizzles, and tastes like beef, but it’s made from plants! The smaller-than-a-floppy-disk-sized patty of the impossible burger is quite a convincing substitute for beef, especially with all its colorful veggie fixings! But while the plant-based burger is flavorful, it lacks the moisture you’d typically find in beef. However, in the Impossible Slider’s defense, I wouldn’t check the moisture box with the Original Slider either. Alas, the White Castle buns seem to soak up more than their fair share of the juiciness.

BK can hang its crown on the coat rack in the corner of the market they’ve carved out with their flame-grilled burgers. The Whopper is simply a good fast-food sandwich. The beef is tender and melts in your mouth alongside the fresh toppings and generous dollops of mayo and ketchup. I can’t believe I’m saying this as a born-and-raised-Midwesterner, but this was my first time trying a Whopper. It won’t be the last.

Burger King just recently stepped up to the plant-based plate and I think they knocked it out of the park. Hardly distinguishable from the original, the Impossible Whopper has the signature broiled taste we’ve come to know and love from BK. (At least most of us.) The composition of the burger isn’t quite as tight as the beef and there is a subtle grainy flavor that comes through, but for a comparable price to its beef counterpart, I’d recommend this for a #MeatlessMonday lunch.

As a member of the same restaurant group as Northstar, Third & Hollywood refuses to settle for mediocre, which is why they serve the same Niman Ranch brisket and chuck blend. This upscale Grandview gem ups the ante with a more generous patty of succulent meat that lends some of its juices to the bun below, creating a perfectly gluttonous, greasy handheld. It’s a sexy-looking sandwich. I just wish I could say the same about myself when I was devouring it.

Guac is extra and so is this veggie-based burger. After a long day of burger bites, this one was the tops. What I like most about this veggie burger is that it doesn’t try to trick you into thinking it’s beef—it’s an entree all its own. The texture of the patty is creamy with help from the rugged mound of guacamole and smooth smoked gouda. I was pleasantly caught off guard when I kick struck my palate from the southwestern-flavored sauce on the underside of the sesame seed bun. If you want your veggie burger to convince you you’re eating beef, this may not be your pick. But, if you’re looking for an outstanding, protein-forward, fresh, and fun sandwich, I’ll point you to Third & Hollywood every time.