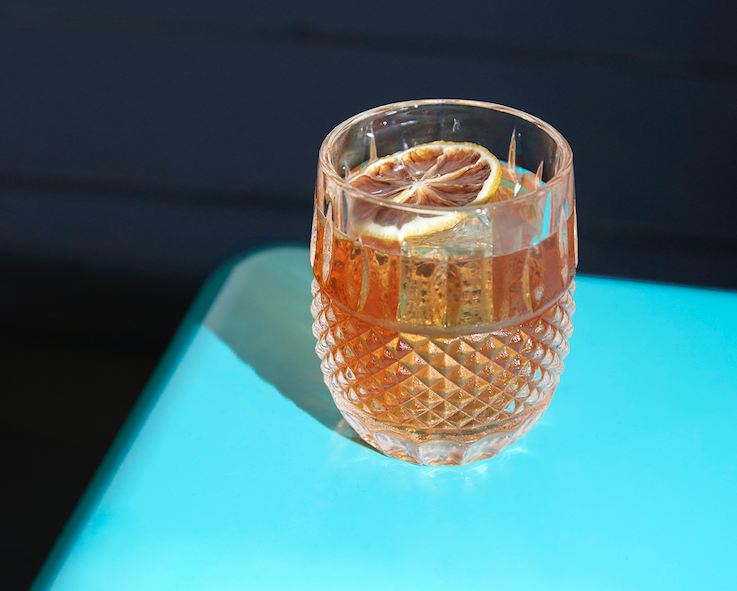 On a side street in Grandview, warm light shines out of a few windows into a dark, rainy, February night, illumining the Echo Spirits sign. Inside, co-founders and distillers Joe Bidinger and Nikhil Sharoff, with the help of beverage director Derek Reno, are adjusting their new ice maker, preparing for their bar’s official opening in March.

“This will be very much a neighborhood bar,” Bidinger says.

Sharoff and Bidinger have been friends since their days in high school at Bishop Watterson. Over the years, they pursued home brewing. They are mostly self-taught, and they credit their brewing experience for a solid foundation in the science that also underlies distilling.

After college, Sharoff became an engineer; Bidinger got a degree in finance and worked in IT. “I liked it, but I wanted something more hands-on,” Sharoff recalled. “We both wanted something that was ours, and we’d always been brewing, so we said, ‘hey, let’s try it.’”

They started the idea for Echo in 2014, originally planning a brewery. “We didn’t have a concept of how many breweries Central Ohio could support. At the time there were 12 to 15, and we were like ‘That’s too many, right?’” Bidinger laughed at the memory. “We started looking ahead, at what would be the next big thing.” When they were ready, they spent two years searching for the right location, eventually settling on the former Four String Brewery.

They moved into the space in January 2019 and started distilling in late summer, opening their spirit shop in October. Today, they also sell at select Giant Eagle and Kroger stores, as well as Arena Spirits and Weilands.

Four String’s dive-bar vibe has yielded to glass, brick, and tile, a more open, roomy feel in the small space. A brick wall honors the Kickstarter donors who helped fund the large glass back door, and tape marks off what will be the “coveted lounge area” looking into the distilling space.

That space is packed with a 700-gallon mash cooker, 300-gallon still, and two 500-gallon fermenters. That’s larger equipment than a lot of places start out with, and also the largest they can t into the space. It’s still small, with low ceilings, for a distillery.

Echo’s focus is on spirits that were popular before Prohibition and that lost their popularity in the ensuing years. “It’s basically been vodka and bourbon for the last 90 years, but there’s a lot more out there,” Bidinger explained.

Since clear spirits are the quickest to produce and get to market, requiring no aging, Echo’s first product is a white rum. While most distillers pick a single base for their rum, Echo uses both cane sugar and blackstrap molasses. The sugar provides alcohol and vanilla-pear flavor, and the molasses provides depth and body. “This is exactly what we were going for,” Bidinger said, taking a sip. “It even says on our bottle: Rethink What Rum Can Be.”

“When you’ve got a rich, flavorful rum, you can sub it into other things,” Reno noted, referring to their website’s recipe for a rum Manhattan.

In the next few months, Sharoff and Bidinger will start their first batch of genever, the malty, botanical ancestor of gin. “Most of the classic gin cocktails you see were probably originally made with genever,” Bidinger said. They also made a rye whiskey, in collaboration with Middle West Spirits, which should be available later this year.

Bidinger and Sharoff are hands-on owners. Other than electrical, furniture, and some of the signage, they’ve done most of the renovations themselves. They are full of energy, tossing around ideas about future competitions and collaborations.

“Our whole concept is ‘know your distiller,’” Bidinger explained. Sharoff chimed in, “My dad was like, ‘You put the sugar and molasses in the mash tubs, why don’t you hire someone to do that?’ but that’s the point. It’s our hands putting this together.”

To keep with the neighborhood feel, Echo plans to keep its cocktails mostly in the $10-to-$12 range, rather than the higher prices of some other local distilleries. “We’re not Chicago,” Bidinger joked. Food trucks will be curated to find good meal and cocktail pairings.

During construction, the lights have been on into the evening, and the team pauses to talk with neighbors and local workers, whose curiosity drove them to wander into the space. The spirit shop, tucked away in a front corner, was open for business before the rest of the space was even remotely ready, enticing people passing by to buy some rum and see the work in progress.

“This is not a business to be built up and sold off,” Bidinger said. “The vision is to keep it that small, authentic experience—to grow, certainly, but to be involved with the daily running of things, to pass this down to our families. There’s nowhere else we could have done this, the way we’ve done it, except Columbus.”