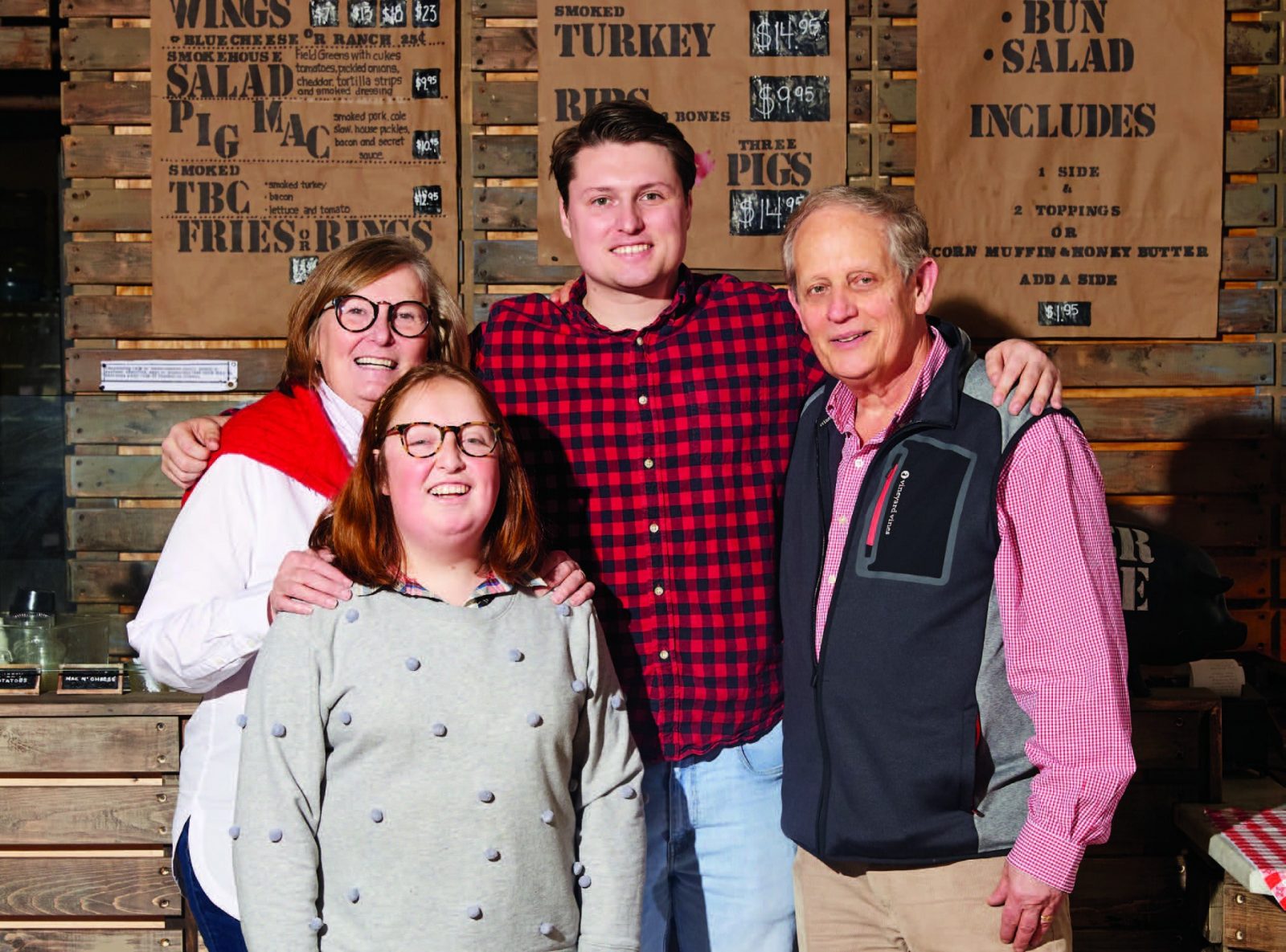 Views from the state house protest

After a few years of uncertainty, we’re pleased to spread the good news: Hoggy’s is back. Both the tide and the guard have changed, and the Bethel Road location is ready to take its next step. This is the story of how the Turner family created one of the most recognizable brands in Central Ohio, almost lost it, then resurrected it in a matter of 29 years.

Mark Turner was just a Baltimore boy with a dream and a tenacious work ethic. From an early age, he set his sights on becoming an entrepreneur, saying he liked the idea of being his own boss and creating something he could be proud of. Mark quickly joined forces with a like-mind named Ken Smith. Together, the two entrepreneurial hopefuls set sail westward, ultimately dropping anchor in Columbus, Ohio.

Meanwhile, Kathy Martinet was growing up in Cleveland as her family navigated the throngs of owning a business—a business she had no interest in being a part of. Later on, she was recruited to work at Columbus-based Express for two years. Kathy planned to return to Cleveland following her commitment, but life had other plans. One mutual friend and one Lindey’s dinner later, she became Kathy Turner.

Mark and Kathy’s wedding marked the approximate beginning of Hoggy’s legacy. The first restaurant opened in 1991 at 2234 W Dublin-Granville Road in Linworth, though Kathy maintained her stance against working for family, at least at first.

“I always said I would never work for my husband or in a family business,” said Kathy. “Be careful what you say.”

She said her involvement in the beginning was small, but with onboarding her mother’s Mac n’ Cheese recipe (a beautiful orange mess of elbow noodles, penne pasta, cottage cheese, cheddar cheese, and sour cream), many consumers would argue that it was paramount. And if Kathy’s former boyfriend was good for one thing, it was his mom’s baked bean recipe. Both side dishes have been menu mainstays since Hoggy’s inception.

Through the ‘90s, business was absolutely booming for Hoggy’s. At its peak, there were seven Central Ohio locations, plus stores in Cleveland and Kentucky. The restaurants were housed in massive, easily-discernible, rustic barns; some were complete with tractors suspended from the dining room ceilings, others sported windmills, still others featured farm silos. Favorites from the menu included ribs, brisket, and pulled pork.

Mark was engrossed in business operations and Kathy held down the catering side of things, which was a very lucrative income for the company. All the while, the couple was raising three children. Kathy remembers these years fondly, saying she liked being with her husband every day and celebrating accomplishments together.

“Mark and I are both driven to work hard, and hopefully that has set an example for our children and team members,” she said.

Hoggy’s continued its sprint through the early 2000s as a main player in both the BBQ and catering scene. But alas, the economic meltdown in 2008, increasing food costs, stiff competition, and changing industry trends proved devastating for the local chain. The last of Hoggy’s sit-down restaurants closed in February 2013.

“It was extremely humbling on many levels,” said Kathy. “We learned who were true friends, and many other people treated us like we had the flu. We made many changes in our life, which were not fun, but made us realize the importance of family and friends.”

But after all the dust settled, the Turners were still able to keep the Hoggy’s brand alive. Catering operations consolidated inside another restaurant owned by Mark and Ken called Johnny Buccelli’s, a fast-casual Italian eatery located at 830 Bethel Rd. With the help of their youngest daughter, Jillian, Kathy stayed busy with weddings and special events.

As luck would have it, the Hoggy’s catering vans parked behind Johnny Buccelli’s garnered quite the commotion from BBQ lovers, proving that the public’s hankering for the hog had not disappeard with the restaurants. Though Hoggy’s food was technically available for catering occasions only at that time, the Turners couldn’t refuse service to those who came in inquiring about the vans, hoping to score some of the bygone BBQ. Eventually, there was such an influx of Hoggy’s fans that the food found itself on Johnny Buccelli’s menu.

As Hoggy’s was slowly integrating back into the mainstream, the second generation was stepping up to the plate. Kyle—Mark and Kathy’s son and Director of Business Development and Marketing—refers to his initial involvement in Hoggy’s as an accident.

“I went to college and did econ because I didn’t want to do food,” he said. He was actually pursuing an internship in technology when he first joined the team in 2017.

But not only did his family need him; having grown up around Hoggy’s—even working there in middle and high school—Kyle was more than familiar with the company. This industry intimacy made him the perfect candidate to shake things up, which is exactly what this new iteration of Hoggy’s desperately needed. Kyle began his tenure by plugging the marketing hole. In turn, this revealed one glaring problem that he believed had to be resolved in order to keep the ship afloat: Johnny Buccelli’s.

At the time, customers walking into the restaurant could order from the Johnny B’s menu: Lasagna, subs, soups, paninis; and from a limited Hoggy’s menu: ribs, brisket, mac ‘n’ cheese. Then at one point, Kyle said there was talk of adding burgers to the menu, and he had to put his foot down—the concept was far too confusing for consumers. He gave a bit of an ultimatum.

“Either we improve this food and get rid of Johnny B’s, or I’m wasting my time here,” he said. The choice was easy when the Turners crunched the numbers and discovered Hoggy’s menu items were far outperforming Johnny B’s. But Hoggy’s return wasn’t as simple as that. Once the menu was fully converted over to BBQ, Kyle saw further room for improvement in the quality of the food.

“We took a really hard look at ourselves and we decided that we could do better,” Kyle said.

Kyle’s goal was to glean inspiration from local BBQ powerhouses like Ray Ray’s and City BBQ, plus look into how places like Texas and Brooklyn were preparing meats. Next, he secured a talented chef who was also willing to entertain direction (or “BS,” as Kyle called it) from a young person. Then there was the matter of the space, which still bore a serious resemblance to a sub shop. Kyle played point guard in the renovations of the space, while Kathy contributed her “Martha Stewart” flare in interior design.

“I am thankful that [Kyle] made a decision not to listen to me,” said Kathy. “He is an integral part of the organization.”

With the menu and the dining room in order, it was finally time to shed the final memories of Hoggy’s previous era. The Johnny B’s sign that hung outside was officially taken down at the end of February.

The new Hoggy’s is still very much a work in progress. The Turners work everyday to win back customers who felt slighted when the original restaurants closed, iron out kinks with the recent renovations, and continually improve food quality and perfect recipes. While Kyle was a catalyst in the Hoggy’s resurgence, he said none of it would be possible without his dad’s skills and refusal to quit.

“If you want to give credit as to how it’s still here, he’s the one who clawed his way back,” he said.

Admittedly, Kyle never imagined working for his mom and dad. There are even times when the family ties feel a little too tight.

“I could breath a certain way and that’s just the worst thing I’ve done all day,” he said with a laugh.

But at the end of the day, family comes first for the Turners, and they wouldn’t have it any other way.

“I couldn’t ask for a better experience than this,” he said.

You know what they say: blood is thicker than BBQ sauce.