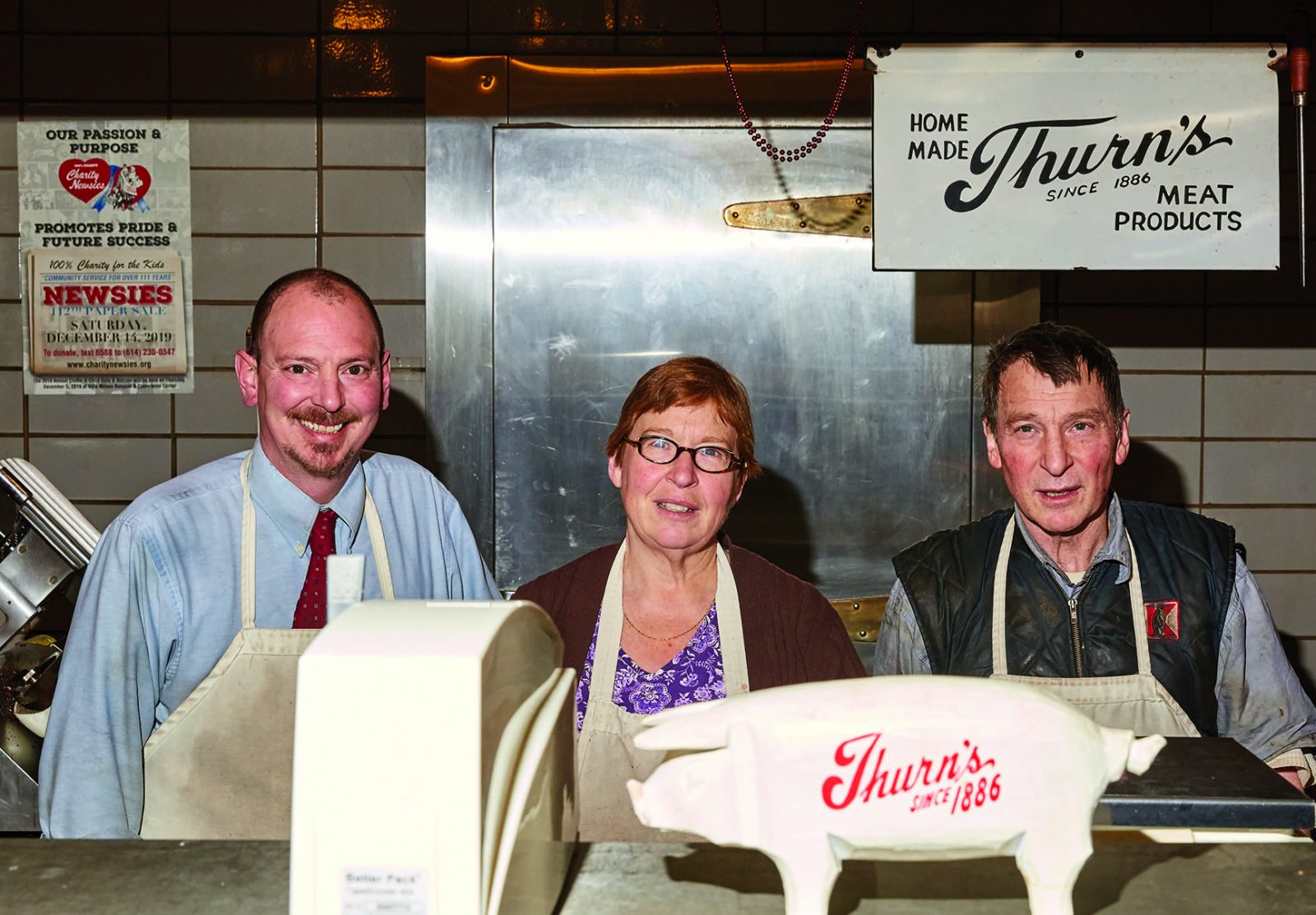 What to do with all those kids?

Officially founded in 1886, the origins of Thurn’s Specialty Meats go back even further. Alois Thurn learned old-world meat processing skills working on his father’s 2-acre farm in the south of Germany. As one of seven sons, he knew that his chances of inheriting the land were slim-to-none. Equipped with little more than his expertise, Thurn set sail for the United States in 1870 with dreams of a better life in the new frontier of the American West.

“He ran out of money when he got to Columbus. His ultimate goal was to go on to Seattle, but he never made it. He never even got out there in his life,” Albert Thurn—Alois’ great-grandson—explains with a laugh.

Seattle’s loss is most definitely Columbus’ gain, as Thurn’s iconic Greenlawn Avenue storefront and processing facility remains a local institution to this day. One of the best places in town to find authentic, old-world German fare, it’s hard to imagine Alois Thurn could have known that the shop would still be in operation when he started selling products out of his home on Front Street.

“At that time, there were seven or eight breweries in that Front Street area, and they had saloons, which were like their taprooms,” Albert says of his ancestor’s beginnings in the business. “He made sausage items that he took around to these saloons.”

As word spread about Alois Thurn’s delicious German fare, he transitioned to selling his products door-to-door to the immigrant population in German Village. From there, he secured a place in the city’s Central Market, the modern-day site of Columbus’ Greyhound bus station. This move also coincided with a new home on Greenlawn Avenue for Thurn and his growing business, which by this time had outgrown the confines of his Front Street residence.

Thurn’s meats were sold at the Central Market for 67 years, until the market itself closed in the mid- 1960s. Meanwhile, the company passed hands to Alois’ son—also named Alois—and his three sons, Robert, Paul and Leo Thurn.

In its third generation of family ownership, Thurn’s stood the test of time through the city’s industrial boom and past the midway point of the 20th century. Though the city itself was changing, the Thurns remained true to the old-world values at the heart of their family business. Still, the inevitable march of progress would have a lasting effect on the business.

In 1957, the Thurns learned that the newly-announced I-71 interstate would likely run right through their Greenlawn Avenue property. As a precaution, the family moved their store up the street to a different location on their property, where it still stands today. In addition to securing the future of the business, this move had an additional benefit. Once the freeway was completed, Thurn’s facility was just a stone’s throw from the I-71 exit for Greenlawn Avenue.

“How do you know when you buy property in 1890 that you’re going to be on a freeway exit? It’s worked out very well for us,” Albert Thurn marveled as to the incredible luck of the business’ coincidental placement.

Albert purchased the family business from his father and uncles in 1988, but his work there has been a lifelong pursuit.

“Thinking back, I did it like a European apprenticeship. I went to school during the day, and two-to-three days a week after school I was here, from the time I was about… probably 10, 11 years old,” Thurn remembers of his youth. “I ran a meat slicer down at the market when I was nine years old. You can’t do that today. All they said was, ‘watch your fingers!’”

In his time as keeper of this family tradition that’s lasted for more than a century, Albert remains committed to maintaining the same quality standards established by his forebears, and that his customers have come to expect.

The secret to the business’ enduring success: “Hard work. A lot of hard work, and making tasty products that people appreciate,” Albert says. “If it wasn’t for the people who appreciate what we do here, I probably wouldn’t be doing it. It’s seeing the smile on their face.”

For a taste of what keeps people coming back, Thurn recommends two of the store’s best selling items: bacon and ham. Fitting with the store’s German heritage, brats and smoked sausages are also a hit. Looking for something a little more “out there?”

“Variety meats. Next week, there’s a class from Ohio State coming in here, and I’m teaching them how to make variety meats—that’s headcheese, souse, blood headcheese and different types of liver sausage,” Thurn explains. “We make a very good braunschweiger that we sell quite a bit of.”

When those students learn how to properly combine pork trimmings into the gelatinized (and delicious) creation known as headcheese, they’ll be taking up skills that have been handed down directly from the Columbus of the 19th century. As for the shop itself, Thurn’s will be around as long as Albert has anything to say about it.