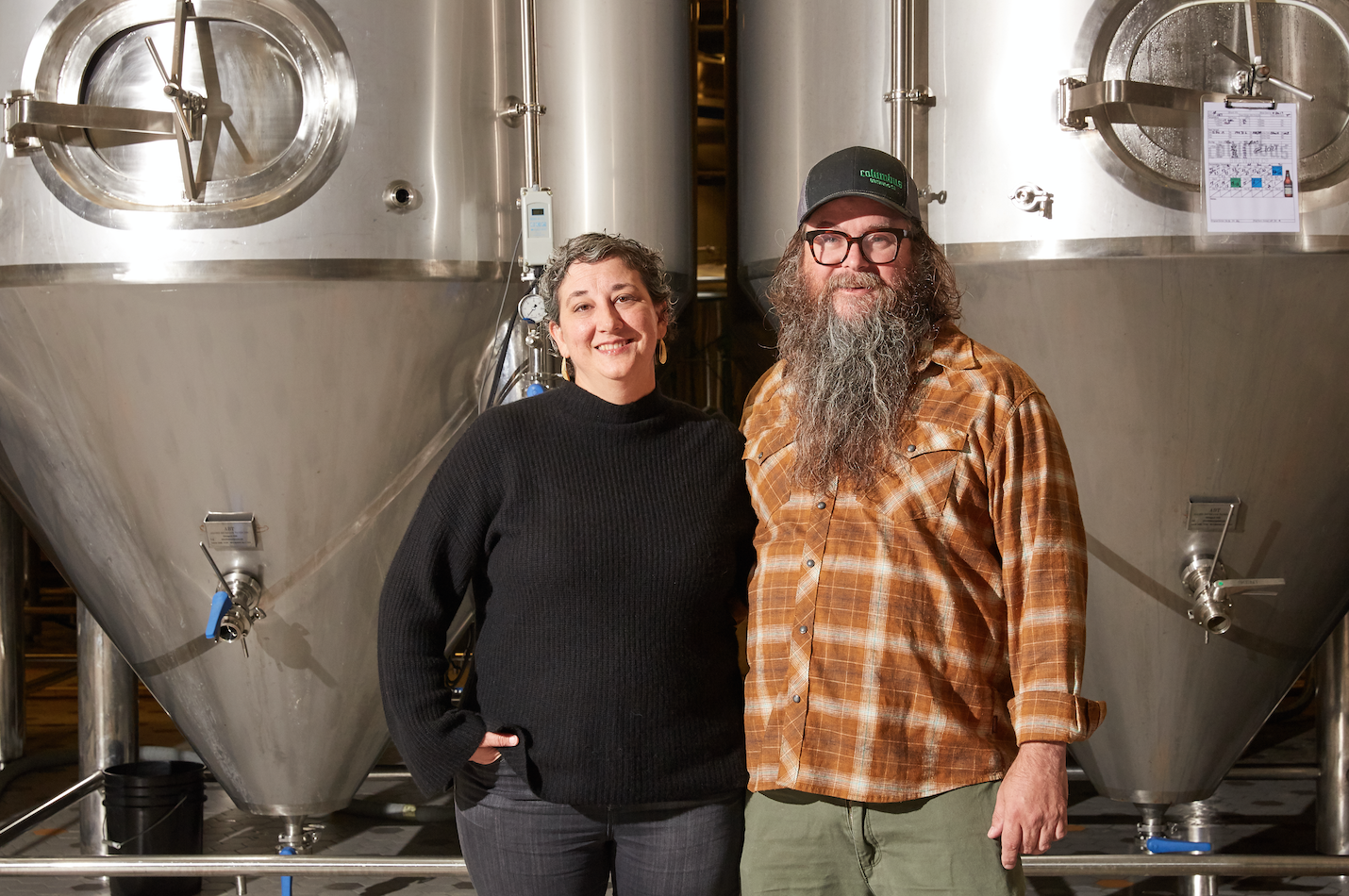 Columbus Brewing Company was at the forefront of the craft beer movement. Beth and Eric Bean are making sure it stays that way.

The next time you crack open a bottle of Columbus Brewing Company’s Bodhi, turn the bottle around until you see a seal of approval label. On every single bottle of CBC’s brews, there’s a quality assurance mark, signaling to the drinker that the brewer is proud enough of this beer to put their name on it. The name you’ll find on all bottles of CBC is Eric Bean, co-owner and brewmaster. And while he and his wife—CBC co-owner Beth Bean—have become more focused on working on their business rather than working for their business since taking over this legacy company in 2014, beer is always on their minds.

In 2019, CBC celebrated its 31st birthday, marking it as one of the longest-standing local breweries in Columbus. The special year also welcomed in a first for the company: a brewery and taproom on the city’s west side. It might sound crazy that one of the oldest breweries in Columbus is also one of the last to open a taproom, but the Beans both echoed this sentiment: it was the next proverbial step. While stocking bars with kegs and grocery stores with bottles is a way to monitor how brews are doing in terms of popularity, the immediate feedback from customers in the taproom can help influence future brews, which are being created daily in the back. It’s the new age, and even local breweries want analytics.

The opening of the taproom also represents the work the Beans have put in since taking over CBC, a journey that can be split into many silos. The brewery they took over holds a legacy in the Columbus community— both as an institution that is local, and one that serves some damn good beers. It’s up to Eric and Beth to not just maintain that status, but better yet, propel it to the next level. Outside some financial help from a bank, the brewery is essentially independent of investors, meaning there is creative freedom, but also plenty of risk. It’s also up to the Beans to craft the voice behind the brand of the beer. With a few iterations under its belt, the current CBC logo represents the traditions built by brewers past thanks to the old style font, and the brewers of the future thanks to modern illustrations, clever names, and interesting designs on the bottle.

The Beans are dedicated owners. While Eric starts his mornings bright and early for sensory tests and meetings, Beth is no stranger to working late into the evening, solving errors on the website and preparing for future projects.

In talking with the Beans, you can tell the two love every aspect of the brewing process. While showing (614) around the brewery, Eric’s eyes lit up as he talked about CBC’s sour program, or the new bottling system which helps monitor the amount of oxygen getting into the bottle once it’s sealed. (It turns out oxygen can be detrimental to beer over time after the bottling process, and the new device allows the Beans to discover where there might be kinks in the distribution line.) It’s subtle moves like this that ensure a quality product finds its way into pint glasses across the city.

“We’ve always said we don’t want people to buy our beer just because it’s local—we want that to be a bonus,” Eric explained. “We want to be the best beer on the shelf […] And it’s difficult. Making high quality beer is not as simple as many small brewers have found. It’s a lot easier when people are coming over and drinking your beer for free.”

This love for beer has roots that run deep for Eric. Prior to CBC, Eric was the brewmaster at Gordon Biersch, a well-loved national restaurant and brewery chain that began in 1988. Before that, Eric took his time to master his craft—literally. He attended U.C. Davis, where he studied brewing science in the master brew program under the guidance of a German-trained brewmaster.

“Henrick was the brewmaster and he was like, ‘Look, craft beer is going to stay. What I see as a problem is there aren’t trained brewers in the U.S. There are a bunch of talented brewers that don’t have the technical skills,’ ” Eric recalled. “He was the one who really convinced me that if I wanted to make a niche in this industry, I had to go to brewing school.”

The goal for Eric since the beginning has been the same: make high-quality beer he can be proud of while also pushing the envelope.

Originally, CBC approached Eric about coming on as the head brewmaster. He had other ideas in mind, kindly declining the offer and following up with a bigger ask: could he just outright buy the company?

“It was a Friday afternoon meeting that wasn’t really planned, and within a couple of weeks we were negotiating it and putting it all together,” Eric recalled.

It didn’t take long for CBC to need more space for all the projects they were working on at the time.

“In the end at the old place, we’d have to drive the forklift into the parking lot to turn it around and get it back in,” Beth said. “We never thought we’d fill the new place, but if you look in the back, that’s not the case.”

The face and voice of the company comes from Beth, who manages the social channels with her own photography. It’s not often considered when it comes to drinking, but branding is a large part of what helps to sell your beers. While the true “King of Beers” might be up for debate, the trademarked King of Beers is something we are all too aware of. The same can be said for local brewers. Finding a way to stand out on the shelves is a challenge, and something as simple as a nice looking bottle design can be the difference between sipping a six pack of CBC IPA, or a case of Bud Light. The Beans entrust graphic designer Greg Davis to create the label designs, and his art work can be found on the murals inside the brewery and taproom.

The pinnacle of their hard work comes in the form of a bottle, the Columbus IPA. Prior to the Beans taking over, CBC was stocked with pale ales and lagers, but it was Eric who introduced a West Coast IPA to the line up. It was an instant success, and it led to the birth of other popular IPAs such as the aforementioned Bohdi and Creeper, both of which have been award recipients at the Great American Beer Festival.

“I think that’s why people know us, you know? Mostly IPAs,” Beth said. “That’s what really is the backbone.”

The Beans said 2014 is when they noticed the craft beer boom start to pick up steam. Couple a community’s interest in where their goods are coming from with a growing need for elevated options and you have the perfect storm for CBC. This is also when other local breweries started to find popularity, and the Beans tip their caps to places like Wolf’s Ridge for combining high quality beers with thoughtful dishes. While the CBC brewery and taproom currently doesn’t feature food, the Beans are working on a food adventure near Old Towne East called the Trolley Barn which will host CBC taps in the future.

Though the love of the brand and the beer is apparent, the care the two show towards its staff further proves the Beans’ dedication to quality. When the two took over CBC, the staff was much smaller than the more than 40 employees they have today.

“We always try to remember it’s not just Eric and I. It’s not just our house on the line,” Beth explained. “We have a bunch of employees and families that count on us and we are trying to make sure they have jobs in the future. We’re responsible for a lot of people—and not just us. Also the people we buy from. It’s like a whole community.”

As always for the Beans, its quality over quantity. This mantra is what has made this brewery into what it is today. And if Eric and Beth’s time at CBC has proven anything, it’s that all great things take a little time and a lot of beer.