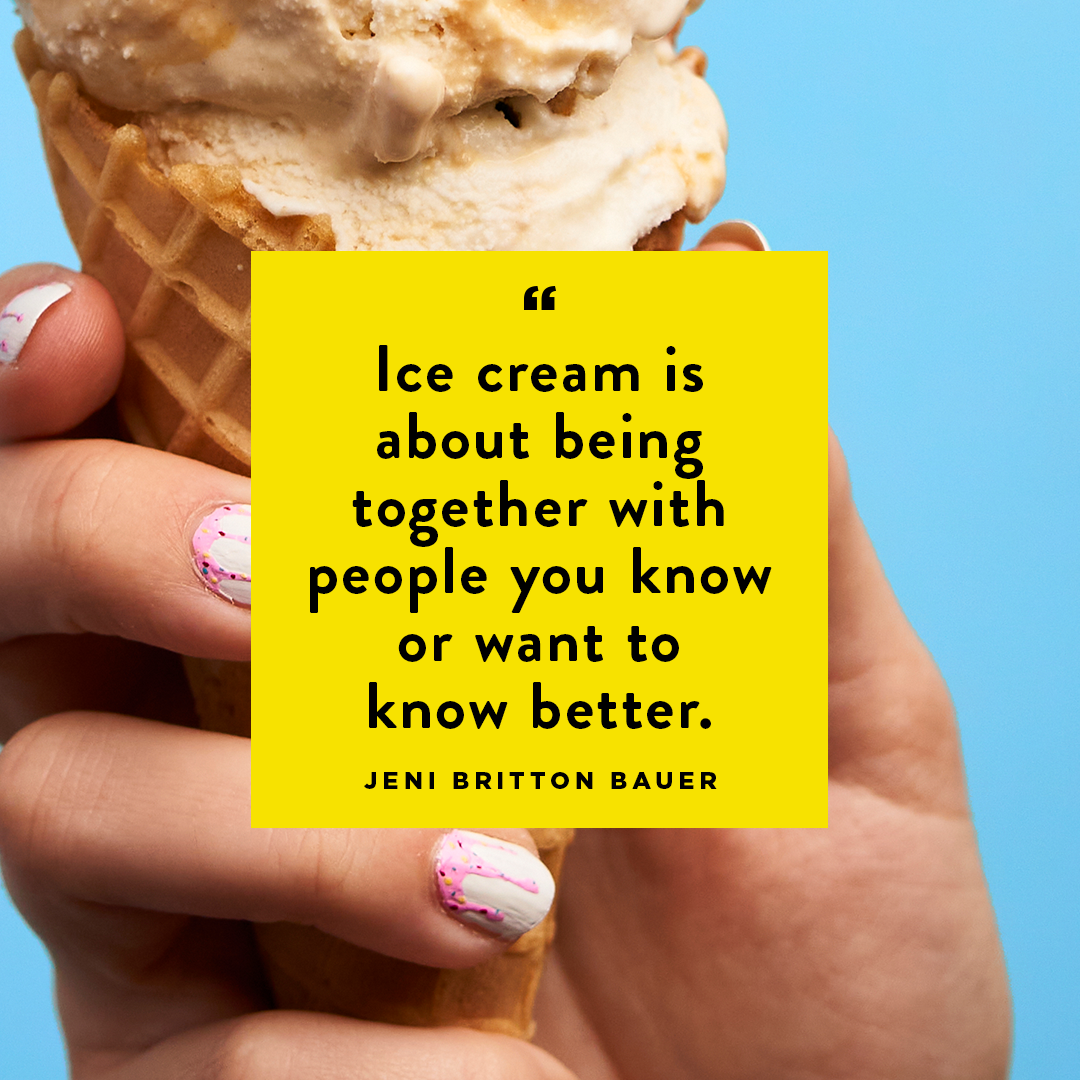 Summer in Columbus can mean only one thing—ice cream. OK, it can mean other things, too, but for Central Ohioans it means they are disproportionately lucky to live in an ice cream lover’s paradise, with plenty of shops, flavors, and styles from which to choose the perfect cool treat.

Milk or dairy-free? Rolled or scooped? Cup or cone? Sprinkles or cherries? Whip cream or marshmallow cream? Vanilla or Over the Rainbow? In Columbus, you’re never more than a few miles from a Graeter’s Ice Cream, Whit’s Frozen Custard, Jeni’s Splendid Ice Creams; or some of the new indie shops making their mark—Diamonds, Johnson’s Real Ice Cream, or Dulce Vida Ice Cream Factory, just to name a few. No matter where you go in Columbus, ice cream is steeped with history.

“We still use a lot of the formulas developed by my grandfather,” said Johnson’s President Matt Wilcoxon, whose leadership marks the company’s fourth generation of the family running the business. “There’s actually an old notebook with recipes we still use at times.”

Wilcoxon said his ancestors would still recognize the Johnson’s flavor today, a flavor, he said, that’s defined by its creaminess and smooth texture.

“The number one ingredient is cream,” he said, adding Johnson’s has shops in Bexley, Dublin, and New Albany. Johnson’s is celebrating its 70th birthday this year. Wilcoxon’s great-grandfather started selling ice cream in the meat locker facility he ran in Bexley, opening a storefront next door on Sept. 1, 1950, where the Johnson’s flagship location remains.

And while customers love the Salted Caramel Pretzel, a more contemporary flavor, Wilcoxon said the classic vanilla his great-grandfather perfected is still his favorite: “If you can get vanilla right, you can get anything right.”

For Dulce Vida, which has locations on the west side, Short North, and Northland, their unique take on fruity flavors has put them at the top of the must-try list for Columbus frozen treat lovers.

Vince Fasone, who consults for the owners, attributes the shop’s appeal to “unique flavors you typically don’t find anywhere else, and the authenticity of the product.”

Witness the mango sorbet, a non-dairy treat with a sweetness cut by spicy chamoy sauce and finished with a tamarind candy straw. Fruit flavors are popular in both cream-based and water-based ice creams, Fasone said, and family members make regular trips to Mexico to remain current on flavors, styles and ingredients. Indeed, Fasone said, many ingredients are imported from Mexico.

The same is true for Diamonds in northwest Columbus, where customers spend a minute or 10 looking at the beautiful, frozen works of art made in-house at Diamonds.

“People enjoy seeing them and, obviously, tasting them,” operator Fabian Torres said of the cream-based and water-based flavors.

Torres’ father is from Mexico, and the flavors are ones the elder Torres has carried with him, finally opening his own ice cream shop in Columbus five years ago.

“My cousin has three shops in Mexico,” Torres said. “All of the recipes come from Mexico.”

Strawberry kiwi is the top seller, Torres said, the full slices of fruit making it a visual and culinary treat.

“It’s all natural, and you’re going to bite into a piece of real fruit,” Torres said.

The experience of ice cream is part of what makes it so great. Just ask Ice Cream Rollery, which has locations in Reynoldsburg and Gahanna.

Rolled ice cream isn’t new, of course, but there are still only a handful of shops specializing in this unique take on the traditional favorite. When Rashad Mosley opened his first Ice Cream Rollery in 2018, he knew it would stand out among the sea of scooped snacks, but that wasn’t enough. There’s also a show.

“It’s custom-made to order right in front of you,” Mosley said, “so there’s that experience of having something made exactly the way you want it.”

The method means the ice cream is extra cold and, Mosley said, fresher, according to a lot of his customers. The high butterfat cream the shops use makes the rolls “nice and creamy,” he said.

Then there are the flavors. Over the Rainbow blends strawberries and Fruity Pebbles in the ice cream as it’s rolled; Cheesecake Escape features an entire slice of cheesecake mixed in.

In Columbus, it seems, the variety of ice creams available to Central Ohioans is endless. So what is it, exactly, about the capital city that makes it such a hot spot for ice cream connoisseurs? Industry leaders statewide have many ideas on the matter, but most come down to two things: Midwestern nostalgia and lots and lots of cream.

“It’s what we do on the weekends,” said Jeni’s Splendid Ice Creams founder Jeni Britton Bauer, whose company started in 2002 at the North Market and now boasts 10 shops in the city with nationwide retail expansion and shipping. Britton Bauer added that Columbus ice cream fans are avid but discerning.

“We are nostalgic, but forward thinking. We’re diverse and open and, I like to say, full of flavor,” Britton Bauer said.

“Our shops are nostalgic but not old-timey,” he said, adding that Graeter’s opened its first Columbus-area shop in 1989 and currently has a dozen in the Columbus area.

Philpott said he likes to think that his company, which is marking its 150th anniversary in 2020, has had something to do with the proliferation of the ice cream business in the state. Chad Wells, who owns the Clintonville franchise of Whit’s Frozen Custard, echoed a similar sentiment.

“Columbus is a foodie town that offers different culinary experiences and is the home of several great ice cream brands,” Wells said. Whit’s, founded in Granville in 2003, has eight Franklin County locations.

But all of them agreed that the access to quality, local dairy is the other major factor in Central Ohio’s impressive ice cream scene.

Whit’s marketing director Melinda Moore pointed out that their “frozen custard is made fresh on site every day, not in a factory,” thanks to the abundance of quality dairy.

Of course, it takes more than dairy to make Jeni’s Roald Dahl-inspired Brown Butter Almond Brittle (a founder’s fave), Graeter’s signature Black Raspberry Chocolate Chip (for which the chips are hand-cut, Philpott said) or Whit’s Peanut Butter Frozen Custard, the base for its popular Buckeye flavor—ice cream innovation is something that’s alive and well in the Buckeye state capital.

“Everybody has a thing that they do and do really well. There’s some fantastic ice cream made in Ohio,” Philpott said.

“We’re all slightly different and there’s room for us all,” Moore added.

In the end, ice cream is about community, Britton Bauer said, citing both a camaraderie among ice cream makers and among customers, who want to share their favorite scoop with their favorite folks.

“Ice cream is about being together with people you know or want to know better,” said Britton Bauer. “Man… we need that right now.”