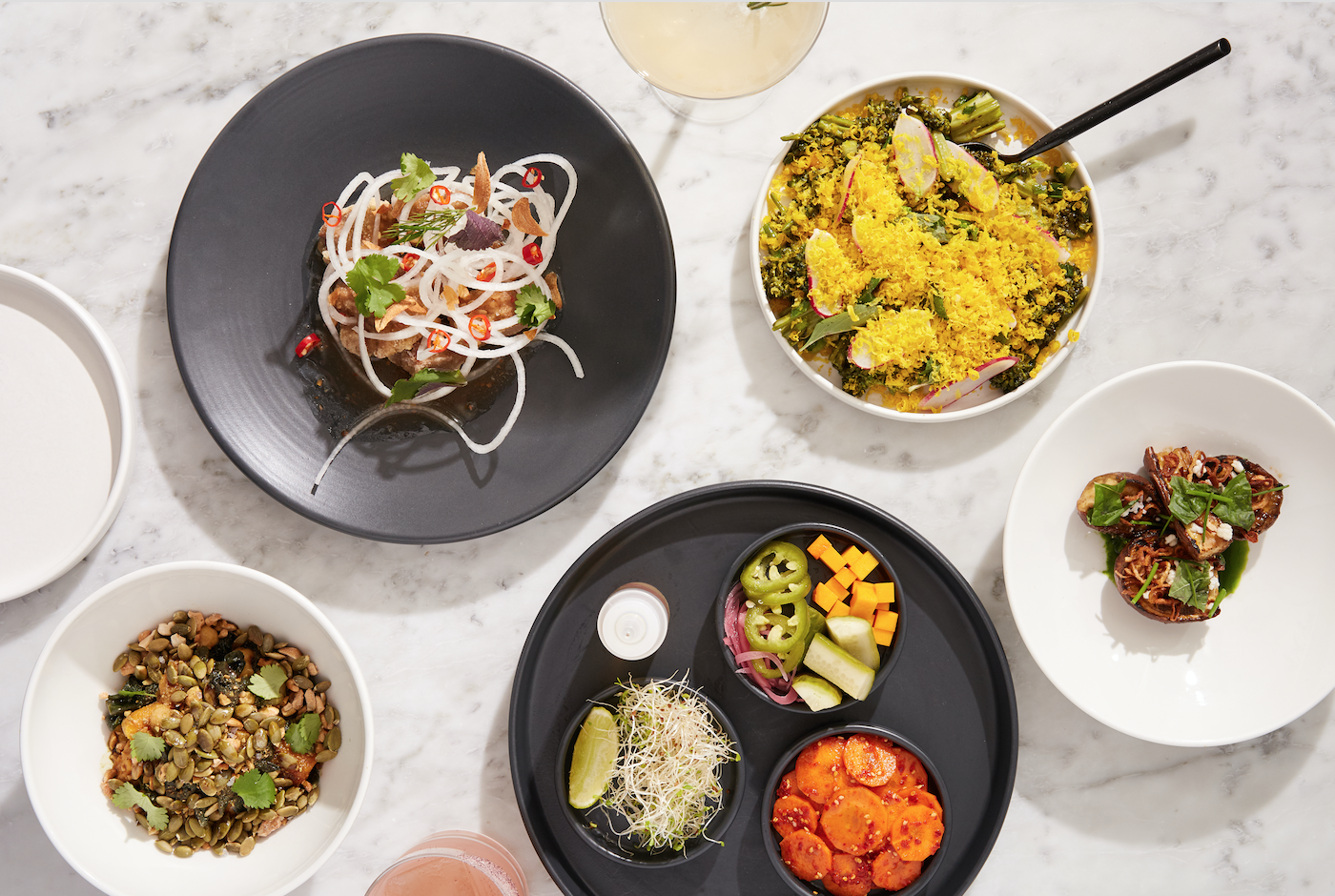 If vegetarian and vegan eating was ever thought of as just a fad, it seems Columbus is putting those sentiments to rest. While most restaurants have opened up the menu for more plant-based options, the city has also welcomed in places that are strictly vegetarian and vegan. These new spots have found ways to serve delicious vegan food that is both familiar and approachable to our Midwest palates. Not only does this satisfy cravings of vegetarians and vegans with meat alternatives, it’s an easy entry point for meat eaters who are suspicious of plant-based food.

However, some places are leaving the meat alternatives behind in favor of dishes that make vegetables the star. And this rings true for Comune, a purely vegetarian and vegan restaurant. You won’t find an Impossible Burger on the menu here, and there’s not a kids menu with chicken fingers and French fries. Instead, it’s dishes that put the same time and care into a head of broccoli as a steakhouse would into a wagyu ribeye steak. The results are a seasonal menu full of options like the ginger-scallion broccolini with cured egg yolk, herbs, and olive oil; or the crispy rice, which has remained on the menu with seasonal updates thanks to popular demand.

Comune’s story begins just before their opening on Parsons Avenue roughly a year ago. Joe Galati, co-owner of Comune, explained that the original idea was to create a vegetarian Vietnamese sandwich shop. It was once they found the space that he and his team began to ask what could this be, and what should this be?

“It’s a cliche thing, but we wanted to create a restaurant that we

Galati and his team put their heads together and looked back on their travel experiences across the world. The question they asked eventually became the basis for how Comune was built: How do we take what we felt at those places and bring them here?

Now with a full year under its belt, it seems those experiences and ideas have lent themselves to an out-of-Columbus experience when dining at Comune. Most restaurants in the city will have televisions on the walls and behind the bar; Comune has none. The dining setup also encourages chatting with your neighbors and community as tables are quaint and close by. The menu is minimal so as to stimulate you to ask your server questions about dishes and their unique ingredients. And the location is in an unsuspecting spot; as more places flood to hot spots like the Short North and Dublin, Comune is planting roots on Parsons Ave., in an area still establishing itself.

And for now, it seems the Parsons location is where Galati will be putting his full energy. The idea of scaling is real, but Galati said he really wants to focus on perfecting the craft at Comune and its original location before expanding beyond. It’s not due to a lack of success, but rather a recognition of what’s made Comune successful so far, and thoughtful caution about expanding too quickly. Restaurant empires like Cameron Mitchell who have been in the game for years now essentially have a playbook for how to go about a restaurant opening. With only one year as a barometer, Comune just doesn’t have that playbook fully finished yet.

“A lot of this comes from we are new to this world; it’s a really big risk,” Galati said. “We don’t have investors. I have like everything I own tied up into this restaurant, so the idea of scaling is like, ‘Oh no, we’re cool! We’ll wait.’ ”

What goes on in the Parsons Ave. kitchen is just shy of alchemy turning metal into gold thanks to what Chef Jacob Inscore is up to. The aforementioned crispy rice has become somewhat of a menu staple with seasonal revamps, as it has gone through more Asian-inspired variations in the summer with the dish topped with a soft boiled egg, or the current Middle Eastern-inspired crispy rice served with saffron, scallions, dates, and zhug. Another staple is the bread and spread; a large piece of housemade herb focaccia with various seasonal dips and sauces.

As vegetables like eggplant become more seasonally available, Comune has found ways to incorporate them in elevated options like the tamarind eggplant in a chili- cilantro glaze with puffed rice and garlic chives. The quality of food here is also in part to how Galati and Comune source their ingredients. While they only have a select few cheeses in the kitchen, they source the dairy product from Laurel Valley Creamery, a local and family-owned farm that specializes in naturally-aged raw milk cheeses. The wine selection is also natural to better accommodate vegans, as some red wines use gelatin which may derive from animal bones. When you really boil it down, Comune might be one of the most eco-friendly restaurants in Columbus.

That being said, Galati and his team aren’t just settling for being good. He explained that they have constant meetings to see how they can find ways to improve; whether that be how the wait staff interacts with diners, or how to subtly tweak a dish to truly highlight its flavors. This process also includes taking feedback from people who visit the restaurant, which can become a balancing act of protecting your culinary vision and making sure eaters come back.

“You can push against Columbus, but Columbus will push back,” Galati explained. “At the end of the day, it is a business and it needs to be able to feed itself… It’s like how do we keep evolving in a way that feels meaningful to us and also helps support the staff and the team we have?”

The reception, in large part, has been well received by the community.

Comune is located on 677 Parsons Ave. For hours and more information, visit comune-restaurant.com.