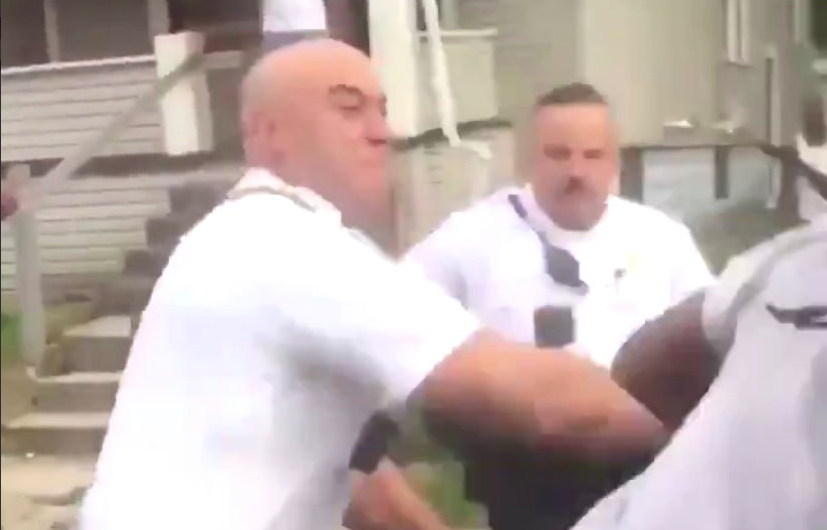 Jonathan Robinson, who was punched in the neck by officer Anthony Johnson (AKA “The Dancing Cop“) along with two other men involved in the incident have filed a lawsuit claiming six officers violated their civil rights.

The incident began when police responded to a report of a shooting on Heyl Ave. on June 7. According to the lawsuit per WOSU, police officers with their guns drawn ordered all adults to exit Derryle Sloan’s home, but told children to remain inside.

Police allegedly searched the home without a warrant and seized a BB gun.

Robinson’s wife Jahanara arrived on the scene with two toddlers, and reportedly received permission to enter the house to retrieve the other children. WOSU reports she was blocked by another officer with a firearm.

Robinson approached the officer who was stopping his wife, and was instructed to step back. Video captured by a bystander then shows Johnson pushing Robinson before punching him in the neck, reports WOSU.

Derrick Sloan, who had been recording the incident on his cell phone, was pepper sprayed by officers, who arrested and charged him with obstructing official business.

Both Robinson and Derrick Sloan were arrested at the scene, but charges against both men were later dropped.

06/11/2019: Columbus police have released body camera footage of the controversial incident from Friday night that called the actions of Columbus’ “The Dancing Cop” into question.

The 49-minute video was taken around 4pm Friday on Heyl Avenue when police responded to a ShotSpotter report of gunshots, reports 10TV.

Below is the footage, including Officer AJ Johnson’s hitting a man with a closed fist (the situation begins escalating around 23:20).

Jonathan Robinson, the man who was punched, was arrested for disorderly conduct and interfering with official business.

06/10/2019: A Columbus police officer known for his dance moves has gone viral once again but this time, it’s not for flossing.

Officer AJ Johnson, AKA “The Dancing Cop,” was captured on cell phone video punching a man while on duty.

Police were responding to a report of a shooting Friday evening on Heyl Avenue. Officers had guns drawn as bystanders shouted at police and recorded, reports ABC6.

Jonathan Robinson, 25, was first pushed by Officer Johnson. Seconds later, he was punched. Read Robinson’s side of the story here.

In a Facebook post, Interim Columbus Police Chief Tom Quinlan said “while uses of force can appear shocking the officer on preliminary review was protecting bystanders during a call for service where guns were fired.” A full investigation will follow.