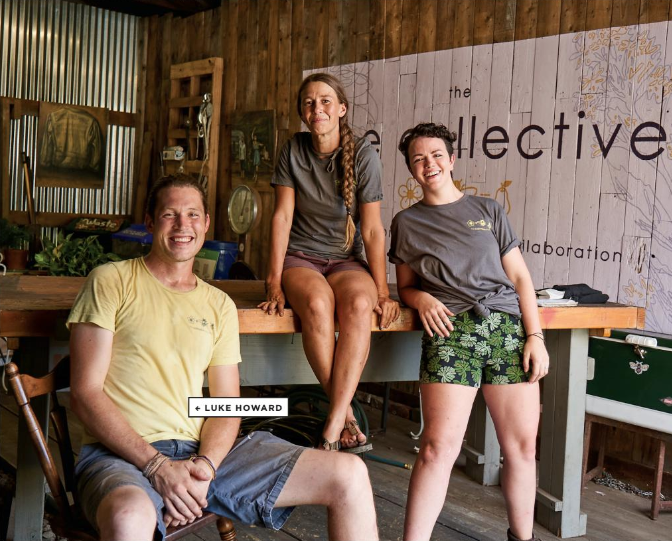 The growing public awareness around bees, beekeeping, pollination, and native plants means a real hive mind is needed to provide the best information and education on these topics.

Howard’s interest in beekeeping was stoked during courses in sustainable agriculture while he was a student at Ohio State University. He supplemented classroom learning with real-world know-how by acquiring four hives soon after finishing school about five years ago.

It’s a topic about which Howard buzzes. “I pretty much won’t shut up about bees,” he joked during a recent online video chat.

Rebecca Gimblett, Howard’s partner in the collective, concurred. “If you hang out at all with Luke, you’re going to hear about bees,” she said with a laugh.

The pair met while they both worked at The Idea Foundry, a makerspace in a rehabbed Franklinton warehouse. As Howard’s interest in not only beekeeping, but in supporting practices that create a beneficial ecosystem for insects, native plants and, ultimately, people, grew, so did his eagerness to share those interests with others.

“There’s a growing prominence just among people in general about bees; it’s this sort of almost romantic idea of hives and honey,” Howard said. “But what I love about someone who wants to investigate what it means to have a hive or to ask about beekeeping is that it’s just a start. You learn one thing and you start to learn more and notice more… more nature, more flowers, others bees and insects, butterflies and other pollinators.

“Then we can branch out into ‘Let’s plant a pollinator garden, let’s care about where our food comes from, let’s make sure our parks aren’t all grass.’”

The Bee Collective currently includes about seven volunteers, Howard said, offering classes and workshops in all of these and other related topics, including herbalism and bee box construction. Classes are hosted at partner gardens, schools and other spaces willing to host programming that will expand as the organization becomes fully functional in its new permanent home at 410 W. Town St. in Franklinton.

“We ran an Indiegogo campaign that ended in June, with the idea to raise some money to create wild spots throughout the city,” Gimblett said. “As a result, we were offered this space in an old barn to sort of house all of our activity.”

Continued access to tools and systems at The Idea Foundry, including a computer numerical control router, full spectrum laser, wood and metal working tools and design programs—not to mention the Foundry’s experts—has benefitted Howard’s bee box construction efforts. He has also partnered with Franklinton-based artists on bee-themed jewelry and other metalwork projects.

“Having a background in making and the benefit of this large facility allows us to do some unique and cool things,” Howard said. “And we’re connected with artists and other talented people in the community, which helps because, in many ways, we’re still learning ourselves.”

Howard said he’s created a unique, “eye-popping” native bee box, and that the Collective plans to install these wild spots in sites around the city over the next few weeks, “turning the city into a pollinator sanctuary.”

Howard also continues to manage hives, now 17 of them scattered throughout Columbus, including on the roof of The Idea Foundry, at Franklinton Farms, and atop The Crest Gastropub on the city’s south side, which collects the honey for use in its kitchen.

“It’s practical for us in that we’re able to harvest our own honey, giving our team a direct connection to the food,” co-owner Abed Alshahal said. “But it also fits with our green, sustainable infrastructure—a rooftop garden, collecting rainwater—at the restaurant that’s crucial to our mission.”

“The news in recent years about losing bees, bee habitat, and the dangers of pesticides and parasites…that’s important but it’s only part of the story,” Howard said. “But the good news is, people are looking for ways to help, to get involved, and you don’t have to keep bees to do it.”