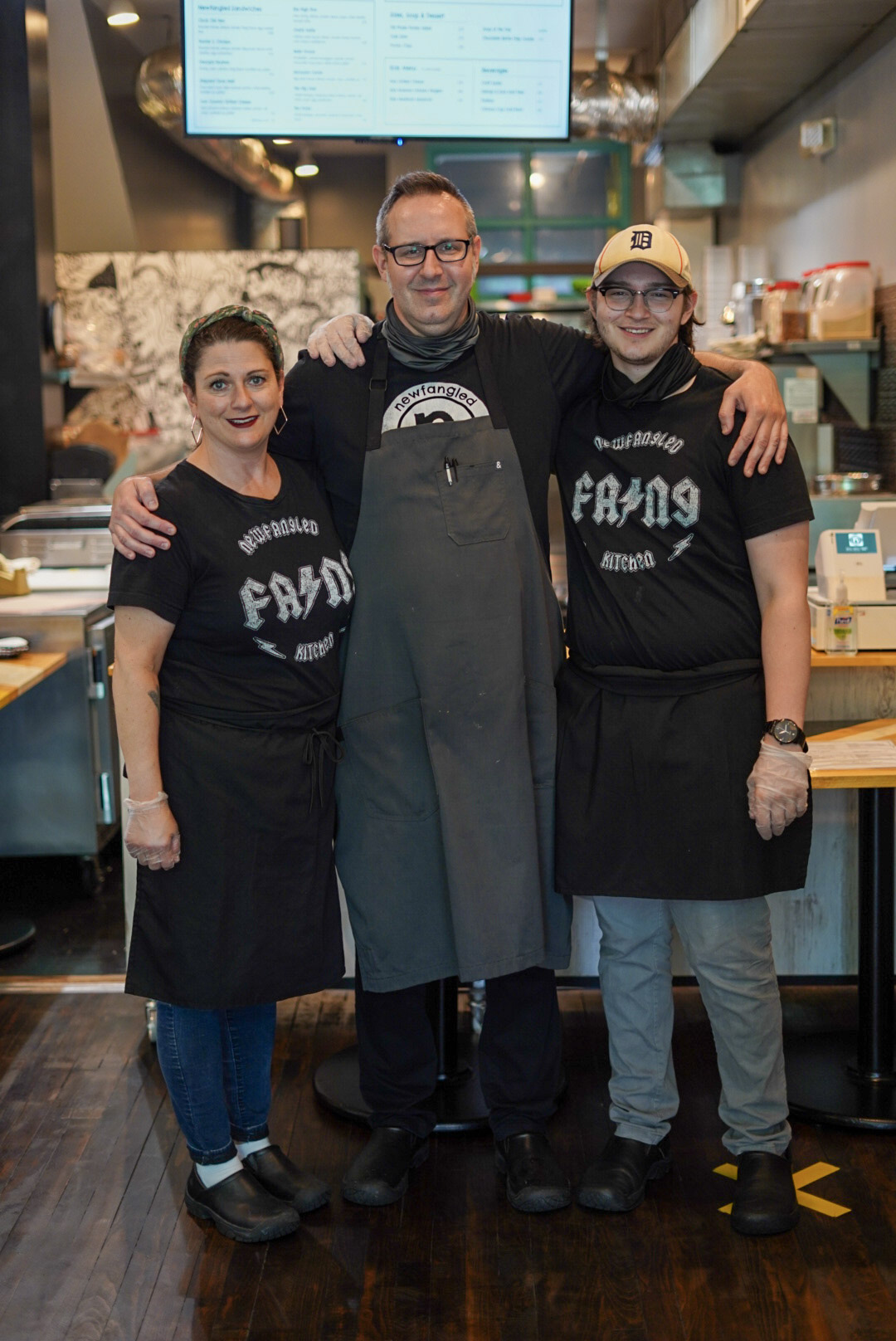 Comfort food is always in style, though not necessarily in season. Salads and soups seem to oscillate with our celestial orbit, and even the temperature of coffee and tea tends to change with the autumn leaves. But maybe meatloaf is the exception, or should be?

Newfangled Kitchen in Bexley gives more than a nod to approachable cuisine and southern hospitality, one that started with signature sandwiches celebrating the hamburger’s hefty cousin, but certainly doesn’t end there.

“We draw a lot of inspiration from the South—the small towns in the Carolinas where you’ll stop for a bite to eat and the food and service are homemade and genuine, not canned,” recalled Eric Dennison, who started Newfangled Kitchen with his wife, Laura, and their son, Ethan. “We wanted to create comfort food favorites with a modern twist.”

Despite the unassuming menu, Eric’s previous stints at Katzinger’s and Lexi’s on Third reveal a refined understanding of humble ingredients and their precarious balance. From the low-country Southern Melt’s spicy pimento cheese, tomato, and red onion on grilled marbled rye to the ominous Lucifer’s Hammer, with pickled jalapeños, pepperjack, and house “diablo” sauce on an egg-washed bun, the star is still the meatloaf. (See how hot in the “Holy Shit that’s Hot” video below!

“We ate so much meatloaf trying to get the recipe right. It took months, and sometimes we just had to take a weekend off,” he laughed. “I’d change one thing, certain this would finally be it, and it would be the worst one yet. We were still working on the perfect recipe when we signed the lease.”

Though currently closed for dine-in, takeout patrons can still peruse Newfangled’s peculiar vending machine, stocked with 80s artifacts: like PEZ dispensers, a deck of UNO cards, and Top Gun on VHS. Everything about Newfangled Kitchen invites another visit, including the fact it’s a family-run business—and the tiny kitchen and dining room next to Drexel Theaters is just the right fit for a curated menu of classics that still challenge convention.

“Ethan is so stellar when it comes to service, he’s just gifted with that gene. And my wife is so great with the guests and really understanding what it takes to market on social media. Then I handle all the production stuff in the back,” Eric chided.

Much like meatloaf, the right recipe holds everything together.

“We decided when we reopened that it was best if it was just the three of us, and we reduced our hours to make that work knowing we were going to be spending literally every hour of every day together,” Eric said.“Financially, it made sense to stay lean, but we also knew it would be more safe for our guests.”

There are undeniable advantages right now for restaurants that can practically calculate their overhead, labor, and food cost on the back of a napkin. But when your signature product’s primary ingredient is unaffordable or unavailable, even the best bootstraps may not be enough. When Wendy’s announced in early May even they had run out of hamburger, it was a gut check.

“It’s really, really important that we have the right grind, the right fat content, which makes the sourcing more difficult. When we found a good price, we’d buy it, and fortunately, we were so busy when we opened back up, we weren’t forced to freeze anything. We’ve never done that, and I don’t know how that would work with our meatloaf,” he revealed. “There was about a day and a half when we didn’t have meatloaf. I just couldn’t get ground beef anywhere, and when we did, it was almost three times as expensive. We just had to take the hit.”

Recent additions include a Valentine’s Day throwback. The Pretty Girl offers more of a sweet heat featuring those same jalapeños, but with a milder cheddar, red onion, and smoky “fang” sauce. Meanwhile, the Back Step Slide combines bacon, bleu cheese, and balsamic aioli. Both are perfectly served between thick slices of grilled marbled rye. And if a killer “Kitchen Kobb,” a fried slab of bologna, portabellas and roasted red peppers, and egg salad cleverly billed as “barnyard caviar” are also your style, skip the basket and grab a sack on the way to your favorite park for a picnic feast without the fuss.

“We’re seeing a lot more repeat business now that everyone is staying closer to home. So we broadened the menu a little to keep everything fresh,” Eric explained. “Sometimes we see the same people three days a week. It’s also a bit more fun on our end, to be creative. It isn’t always easy to smile behind a mask. But it becomes exponentially easier when you have the kind of clientele we do, and the outpouring of support we’ve received has been so heartening. Failure for us just isn’t an option.”