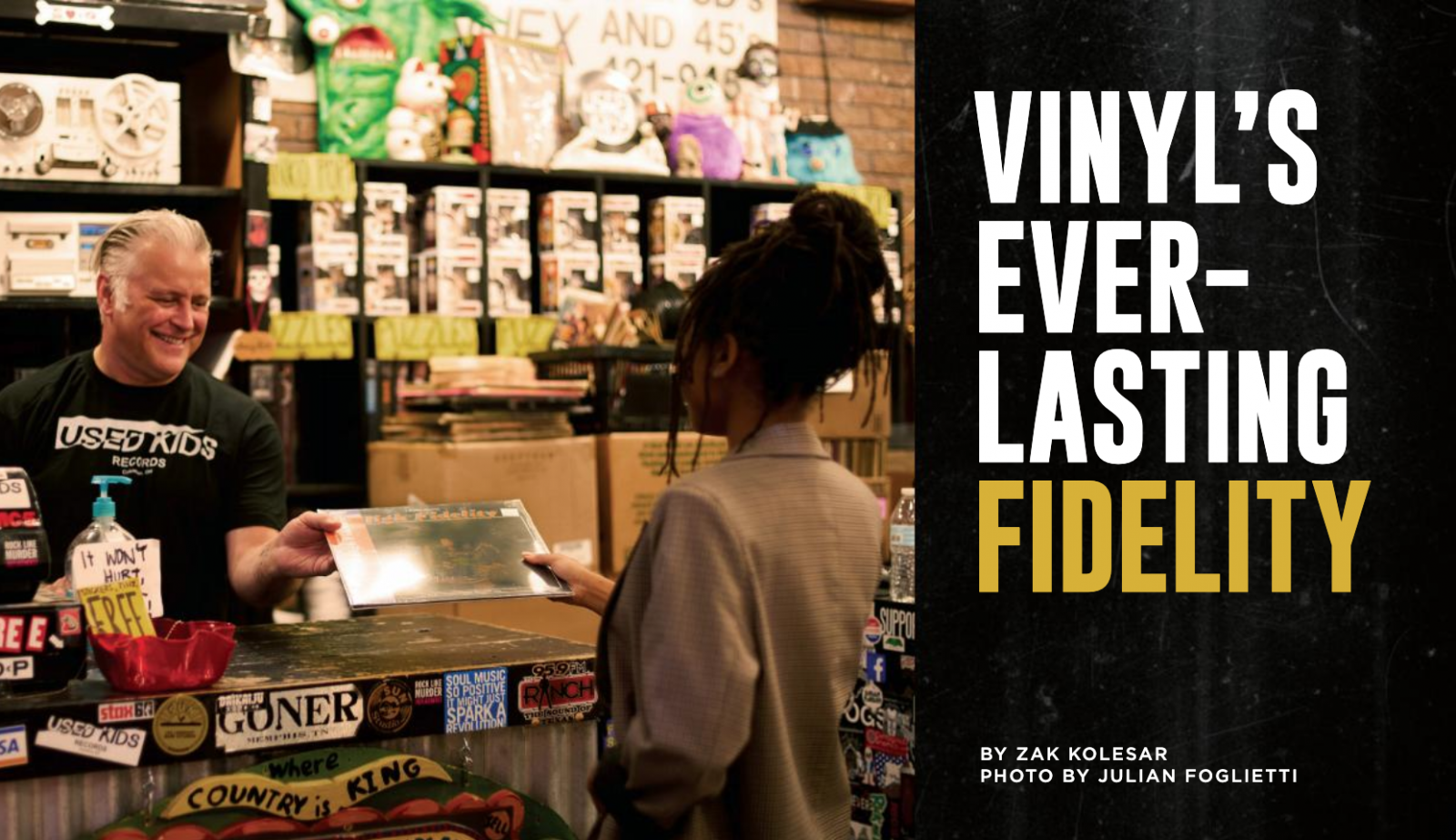 The idea of a romantic comedy starring a woe-is-me record store owner sells just as well in 2020 as it did in 2000. High Fidelity, a Nick Hornby novel that was adapted to the screen at the turn of the century, was rebooted as a television series just this year—and the love of vinyl plays just as sweet.

“To me there is nothing like going into a record store and seeing something that you’re like, Man, I really want to either have that or the artwork on it is so eye catching or I’ve heard of this band but I don’t know this record,” said Pat Dull, Columbus musician and local record producer.

The movie, which starred John Cusack, Jack Black, and Lisa Bonet, turned 20 this year. And while 20 years may not seem like a particularly long time, the story of a failing record store owner told through a narcissistic, sometimes misogynistic male lens sure seems outdated in 2020.

However, the rebooted TV series starring Zoe Kravitz, Bonet’s daughter, in that role, minus the misogyny, seems incredibly fitting for 2020. And it also may explain the recent uptick in people of all ages showing off their personality through their record collections.

Numbers don’t lie. Vinyl sales have posted an increase for the past 14 years. According to a report from Forbes, in 2019 alone, one quarter of all recorded music sales in the U.S. was thanks to vinyl–with sales doubling from the previous year. And if that doesn’t convince you that vinyl is here to stay, purchases of digital downloads and CDs all saw a decline in sales in 2019 according to the same report.

But while vinyl won its round in 2019 as the primary source of non-digital music consumption, 2020 could prove to be a challenging year for any small business that isn’t in the paper towel or hand sanitizer sector. Even before COVID crashed the party, the record store industry was hit with a curveball a month prior to the pandemic shutdown.

Eight days before the premiere episode of the TV version of High Fidelity in February, one of only two manufacturing plants to supply the lacquer used for creating vinyl–burned down. After the fire at Apollo Masters, located in Banning, California, there was only one plant left in the world—one that was only producing 25% of the lacquer for vinyl before the fire—Japan. And that has the potential to cause future supply issues as vinyl demands increase.

First the news of the fire struck fear in the usually optimistic owner of Lost Weekend Records, Kyle Seigrist. And then COVID-19 hit the U.S. in early March, just over a month before Record Store Day, the annual event created to celebrate the culture of the independently owned record store. Compared to his April 2019 numbers, Siegrist’s sales were down 80% with no RSD revenue. Greg Hall, owner of Used Kids Records since 2014, also reported an initial 70-85% drop in revenue when his doors closed due to quarantine.

Something that COVID-19 has proven however, is that boredom and isolation leads to more hobby exploration, which also happens to be the exact reason why Sigriest got into the vinyl business in 2003.

“I wanted to open a store like (now-defunct Columbus record stores Singing Dog, Capital City, or School Kids), and I thought, ‘What could my niche be?,’” Siegrist said. “I’ve always liked vinyl, so I thought my niche would be vinyl; everybody else is doing CDs and records, I’ll just make my niche vinyl.”

And so far it has been the decision that kept Siegrist afloat during what could have been a downturn during COVID. Despite the disruption in April—Siegrist said his business was down $2,000—he noted that his business had an advantage during the shutdown because he rents the apartment above the storefront, which meant he could swiftly transition to curbside pickup for sales.

There was one more thing that, despite the shortage of vinyl and the initial COVID losses, that has kept vinyl alive—loyalty. A great part of the success of Lost Weekend Records is thanks to the loyalty of vinyl buyers. Siegrist had a customer purchase a $100 gift card at the onset of the pandemic to use when the store reopened. Two other customers paid $200 each for Siegrist to curate a vinyl selection for them personally.

“We have really supportive customers, and I think most independent record stores have a loyal (customer) base that lets you survive,” Siegrist said.

Greg Hall, owner of Used Kids Records since 2014, felt similar love from vinyl lovers during the shutdown. However, he does understand how dependent the vinyl-buying experience is on physically being in the store and sifting through items, two things Columbus shoppers have been told not to do for months.

“Nothing can replace customers coming into the store and browsing because they will find all kinds of stuff they never even dreamt about,” Hall said.

Hall recalls a memory that made him rethink his interior decorating 10 years ago, when Used Kids was still located on High St., a duo of fifth-year senior female students at Ohio State walked up the dark steps of the old storefront. When asked why they were just now visiting the store after probably passing it hundreds of times to and from class, they plainly said the place “seemed sketchy.”

“While [the old store] was funky and stuff, it wasn’t necessarily always the most inviting,” Hall said. “It was largely what we kind of jokingly said over the course of many years, a sausage fest.”

Well the record store sausage fest is officially over now.

“We’ve always been a place that when you have females working in a store, they’re going to feel safe, and a lot of it has to do with who’s at the desk,” said Amy Kesting, co-owner of Spoonful Records.

These welcoming atmospheres in Columbus record stores has helped attract families, single female shoppers, groups of girls, and even moms with strollers who see a storefront like Spoonful as a safe space.

The Power of Touch

And as much as it may make sense to point fingers at digital music streaming as being the Achilles’ heel to the vinyl, owners like Hall have actually seen the power of it when attracting a younger demographic to the medium. Many times he’s observed a customer sift through a stack of records, come across something that might interest them, and then play the album out on their phone.

This tactic usually results in a sale.

“People I think need tangible stuff, and not a lot of stuff, but certainly something to cherish like a record collection,” Hall said. “They just flooded these spaces because people need something tangible.

“To me, those things that give people pleasure and maybe kind of move their mind out of how bad things are is a really, really great thing.”

The Future of Vinyl

And it’s also not the end of the vinyl world. Although there may be a production lag when a new record drops, there is hope for the future of vinyl in the U.S., with talks of a new lacquer plant being built in the next year in the works and the option of direct metal mastering to create records.

There is also the power of the media hipness factor. Which is why a show like High Fidelity, seems fitting for 2020, especially with a female lead like Kravitz who challenges men who try to talk over her musical knowledge. Yeah, the pretentious music takes are still there. But it’s no longer just a boy’s club.

It’s refreshing to see that the consumers keeping the vinyl industry alive are no longer just the geeks who argue over Smiths’ records or talk incessantly about obscure imported LPs.

“What’s happened for the industry as a whole is that people, in particular women, were starting to get turned on to music again. Not necessarily their phone, but something physical,” Hall said.

Vinyl collectors will have a chance to support their favorite independent record stores with a 2020 expanded Record Store Day that will take place on three dates over three months. The drops will happen on Aug. 29, Sept. 26, and Oct. 24.