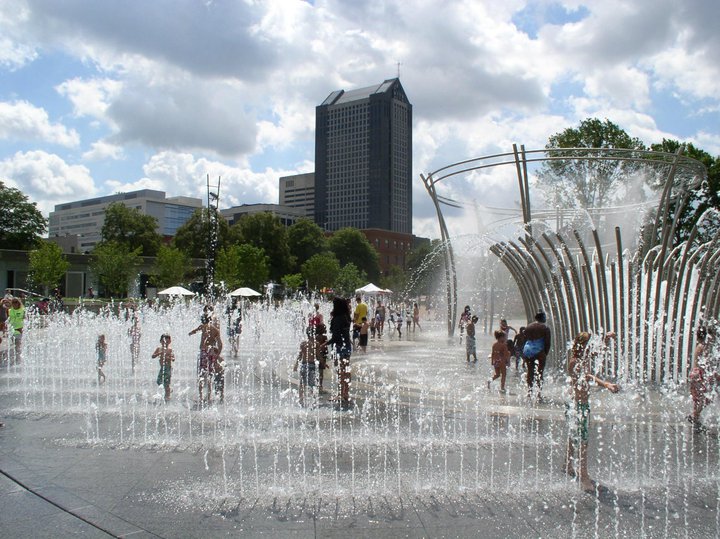 Photo courtesy of the Scioto Mile

614 Day: How the capital city’s celebration looks to reignite your passion for Columbus

Call them whatever you like: splash pads or public fountains, Columbus is full of them.

And with a hot weekend just around the corner, it’s time we went over a list of our favorite spots throughout the city to cool down on a scorching summer day.

While the Scioto Mile fountain (the crown jewel of Columbus splash pads) is closed until 2022, that doesn’t mean you’re out of cool-down options this year.

So grab a swimsuit, Columbus, and let’s get out of the heat.

Also known as “Bunny Park” by locals due to its centerpiece statue featuring a trio of dancing hares, this splash pad is one of the few that holds a candle to the Scioto Mile Fountain in terms of size. And this one gets points for being just as eye-catching as it is fun, with a massive rock outcropping surrounding the fountain.

While several spots on this list are bonafide Columbus icons, Hilliard’s Stations Park in (you guessed it) nearby Hilliard might not be on everyone’s radar just yet. It should be, though. This splash pad is not only big enough for the whole family at once, it’s also unique, as its relatively  well-hidden water jets stream up from inside the park’s amphitheater grounds.

Need a quick break after hitting the mall? Easton Town Center has you covered, with a great public-use fountain that’s centrally-located, kid friendly, and tons of fun. If you stop by at night, you can even hop into a spray of red, green, blue, and purple water, as the fountain features an after-dark lights display.

If you and the kids want something a bit more interactive, then the Veterans Park Spray and Play in Delaware is right up your alley. With an entire dinosaur-themed play area for the kiddos, this spot also incorporates the prehistoric into its splash pad, with dino-skull sprayers, fossil fountains, and more.

I’m just going to say it: North Bank does not get enough love. This city park boasts a unique location along the banks of the Scioto in addition to a beautiful view of the Columbus skyline. What better way to cool off than with the (614) directly in view? Even more, the North Park Pavillion (where the splash pad is located) can be rented out for private events.

If you like this, read: Hidden Gems: Stockport Mill Inn