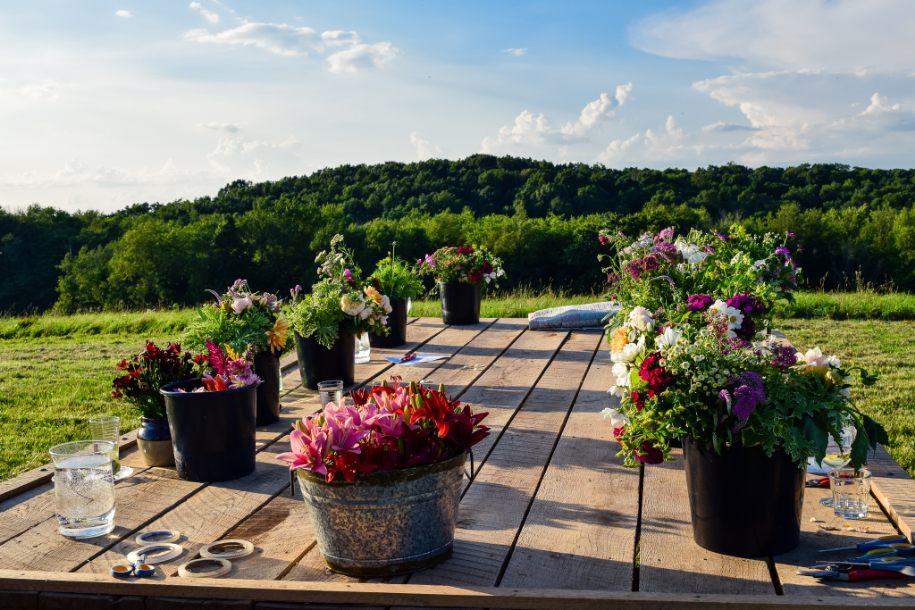 Just in time for Valentine’s Day, North Market Downtown has begun hosting a long-term floral pop-up shop. Beginning last weekend, Mohican Flower Farm will have a regular pop-up at North Market Bridge Park from 9 a.m. until 6:30 p.m. every Friday and Saturday, a partnership that will last until the first weekend in May.

Named for its proximity to the Mohican-Memorial State Forest, the Ashland County farm (located at 1074 Township Road 3106 in Perrysville) offers a wide selection of homegrown seasonal flowers, including (but not limited to) Iceland poppies, tulips, and ranunculus in the spring; peonies and zinnias in the summer; and sunflowers and dahlias in the fall.

“My bouquets are more natural, and they just look a little bit more like wildflowers than most,” he said.

And don’t worry, he’ll have plenty of extra stock on hand for those of you looking to grab a Valentine’s Day bouquet this weekend.

For McFadden, it’s always been a dream to grow and sell flowers for a living, but even with this in mind, his farm actually started as a spot for produce more than anything else. As luck—or fate—would have it though, things began to slowly shift in McFadden’s favor.

“I’ve owned the farm for about 10 years, and when things first started up I was selling produce. All the farmers markets I would go to, I would bring some flowers to sell on the side, and they would end up selling better than everything else,” he said. “So between the flowers selling so well and as they’ve always been a passion of mine, I realized that this could work. I’ve been selling them full-time for five years now.”

And even though McFadden and his boutiques will unfortunately be gone once farmers market season kicks off in full force at the beginning of May, you can still make a visit to Mohican Flower Farm to gather your very own fresh-cut flowers.

Open from noon to 5 p.m. Monday through Friday, the farm borders the Mohican-Memorial State Forest and is a worth a day trip for this alone. Farm visitors are even able to harvest their own flowers. McFadden’s you-pick section of the farm is located on a scenic overlook, letting guests take in the idyllic surroundings while picking up flowers that don’t get any fresher.

Sounds like a pretty good last-minute Valentine’s date idea to me.