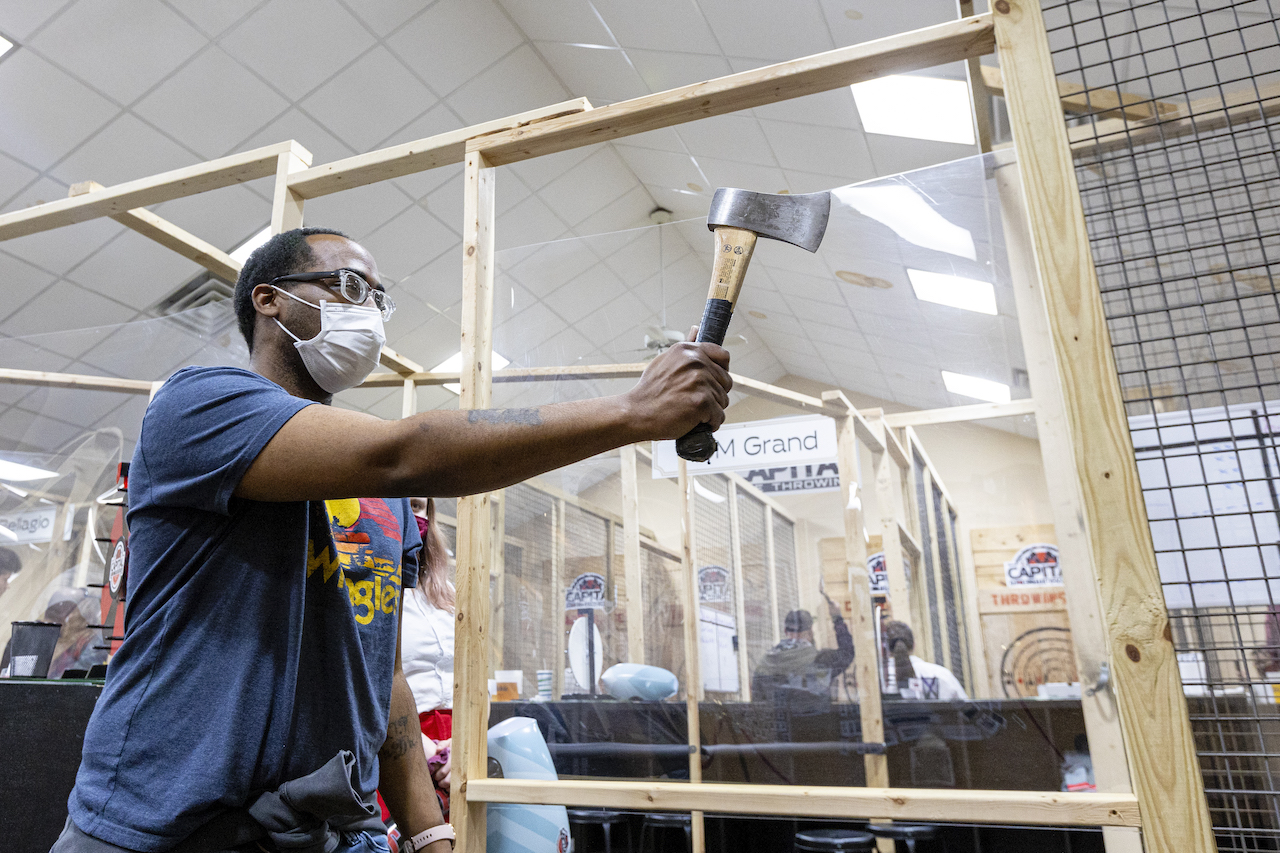 Axe-throwing is on the rise in Columbus

The human race has evolved in many truly remarkable ways.

We’ve learned to split the atom, walk on the moon, and (most importantly) order a pizza with two clicks of a mouse.

Sometimes though, the adventurous primate in all of us takes over, and we just want to throw an axe at the wall.

“In most cases, you’ve thought about throwing an axe or some other sharp object at something else. And in most cases, you haven’t because we live in a civilized community,” said Jess Hellmich, who launched the Columbus-based Dueling Axes with Paul Sherry in June of 2018. “But now all of a sudden you have a commercial space for it to be done safely in a controlled environment.”

And while any axe-throwing company offers their own small variations in guidelines, the general rules go something like this: Participants stand within their designated throwing lane, 12-15 feet from a target that’s usually painted onto soft wood. Their axe (usually between 1.25 and 1.75 pounds) should generally make one full rotation before sticking into a target, which features different sections holding specific point values.

There are a range of throwing techniques, such as the two-handed over-the-head toss or the one-handed throw. But no matter which one you pick, Mayra Aburto, marketing director of Capital Axe Throwing, wants you to know that it’s actually a very safe activity.

“We get a lot of questions about that, but we have throwing coaches on hand for everyone. We go over our house rules carefully, and people are super receptive to them,” she said. “We haven’t had a single issue with safety.”

And in the last few years alone, axe-throwing in the U.S. has enjoyed a meteoric rise. You might even recall a viral video from several years back of A-lister Jason Momoa trying his hand at the sport. While the activity has plenty of natural appeal, and celebrity endorsements never hurts, Hemlich actually believes one of the reasons it’s become so popular is because places like Dueling Axes transformed axe-throwing into a true leisure activity.

“We weren’t the first in Columbus, but industry-wide, we were one of the first ones to take it from the warehouses and garages and the off-the-beaten-path locations to an actual nightlife activity,” Hellmich said. “Our intention was always to bring it mainstream.”

One way to do this is by adding food and drinks to the mix. The original Dueling Axes downtown location has a BYOB and BYOF policy (in addition to delivery partnerships with nearby restaurants). What’s more, its New Albany location, which opened in December, offers a full bar to guests. Likewise, Capital Axe Throwing features a concession stand, draft and bottled beer, and even catering options for larger parties.

This approach to axe-throwing doesn’t preclude a viable competitive scene, though. With professional organizations like the World Axe Throwing League, which recently received ESPN airtime, axe-throwing as a sport is very much on the rise. There are even some top competitive names from Columbus. One of them, Dr. Dan Ceballos—who has already logged multiple high finishes in WATL competitions—is from Columbus, and was a regular at Dueling Axes early in his career.

And really, that’s the beauty of axe-throwing. It’s popular and exciting, but still fluid. This allows fans of the activity to participate in a number of different ways, none of them wrong.

“We’re seeing more and more people come through now as they understand what axe-throwing is all about. And this is part of the reason it’s so great too; axe-throwing really can be whatever you want it to be right now,” Hellmich said.