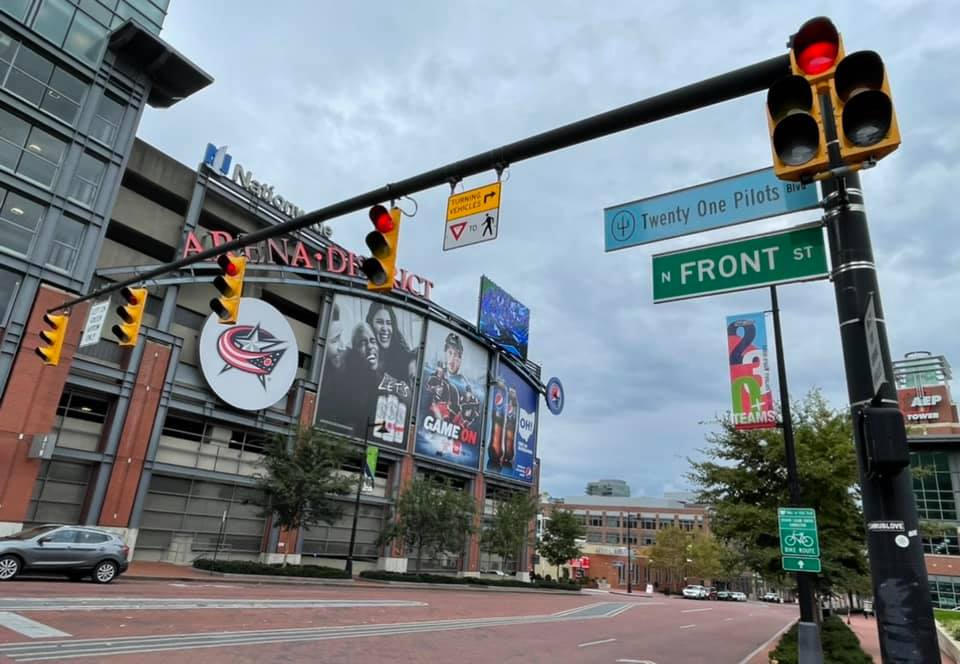 Nationwide Boulevard Twenty One Pilots Boulevard has been busy lately, with out-of-town fans posted up in Columbus, waiting to catch their favorite band perform.

In anticipation of the chart-topping hometown duo Twenty One Pilots playing a trio of shows at Nationwide Arena between Oct. 27 and Oct. 30., a section of a bustling Columbus thoroughfare has been temporarily renamed.

The corner of Front Street and Nationwide Boulevard, which overlooks the arena, will temporarily be named Twenty One Pilots Boulevard, according to the City of Columbus Public Service Department.

The name change also happened in 2019, in anticipation of the band’s first-ever performance at Nationwide Arena.

It did not occur last year, due to the pandemic.

According to Gary O’Brien, Director of Communications for Columbus Arenas Sports and Entertainment, this year’s renaming marks the band’s string of three consecutive Nationwide Arena shows.

“It’s never been done before with concerts,” he said.

O’Brien also said the city’s new influx of visitors, biding time until this evening when the first show kicks off, have also noticed the new street name.

“It’s really something; it’s generated a lot of interest,” he said. “It’s become a photo opportunity for a lot of people.”

According to O’Brien, the honorary name will last until the beginning of next week, so you’ll want to catch it while you can.

If you like this, read: City Council approves legislation that allows for outdoor game-day drinking in the Arena District