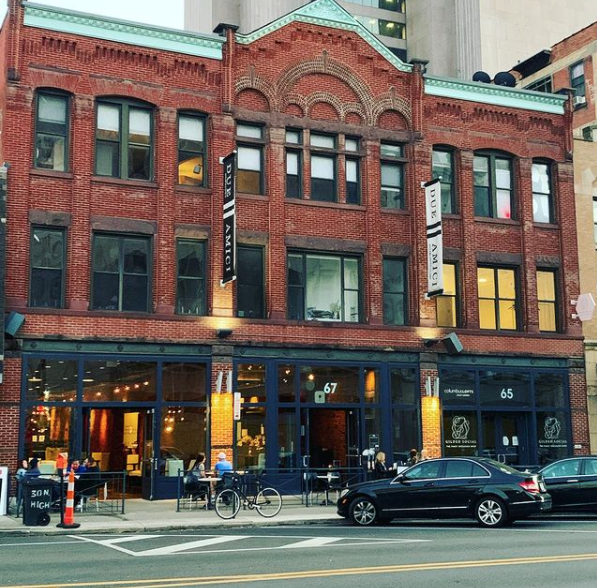 Open for 16 years, Due Amici has seen four presidential inaugurations.

Owner Jeff Mathes said that despite the protests reportedly planned by extremist groups for the downtown area, he plans to keep his Italian restaurant at 67 E. Gay St. open for the fifth inauguration.

“We are going to stay the course and stay open and unboarded,” he said.

As local law enforcement prepares for expected protests, restaurant and bar owners like Mathes will also have to decide if and how to prepare.

Gov. Mike DeWine in a Jan. 14 press conference outlined safety measures for demonstrations expected to occur in Columbus ahead of the presidential inauguration. DeWine said Ohio National Guard members will back up the Columbus Police Department as well as the Ohio State Highway Patrol in the city. He announced the statehouse, as well as state office buildings in downtown Columbus, will close Sunday through Wednesday. State personnel will work from home or other assigned locations.

According to a Jan. 15 press release from the city of Columbus, the city’s downtown campus will be closed to the public Jan. 19 and Jan. 20. That includes City Hall at 90 W. Broad St., 77 N. Front St., the Michael B. Coleman Government Center at 111 N. Front St., and the Beacon Building at 50 W. Gay St. All city facilities will be closed Jan. 18 in observance of Martin Luther King Jr. Day.

Joseph and Michael Thomas, owners of Whistle & Keg, 343 N. Front St., said they will be keeping a close eye on the situation and will be closed Sunday through Wednesday.

“We hope that those who decide to protest will use their given first amendment right and not take it any further,” they told us in a statement. “The last thing this city needs are any more setbacks. With that being said, we will be making sure our patio is clear and staying closed for those days.”

Marc Conte, acting executive director with Capital Crossroads, said some other downtown businesses would likely follow DeWine’s lead and close Sunday through Wednesday. Still, downtown Columbus has only had about 20% of its normal workforce in the area on any given day since the pandemic started.

Conte said information has been widely distributed about a protest by extremist group the Boogaloo Boys on Sunday, Jan. 17, and there could be other such events leading up to the inauguration.

Homa Lily Moheimani, manager of media and communications with the Ohio Restaurant Association, said the ORA will be providing updates to members statewide as well as its Columbus Local Restaurant Alliance group.

“We expect hundreds of police and law enforcement officials in Columbus to manage possible protests and traffic disruptions,” she said.

When protests occurred here in the summer as part of the Black Lives Matter movement, Due Amici didn’t sustain any damage, Mathes said. He didn’t board up his restaurant prior to the protests, although he did end up doing so for three days during the first weekend.

Still, Mathes said he feels it’s important to remain open now so customers who live in the area and visit regularly have somewhere to celebrate and escape from all the negativity.

“We are going to stay open and unboarded, in celebration of the inauguration and our democracy and being part of the state capital,” he said.