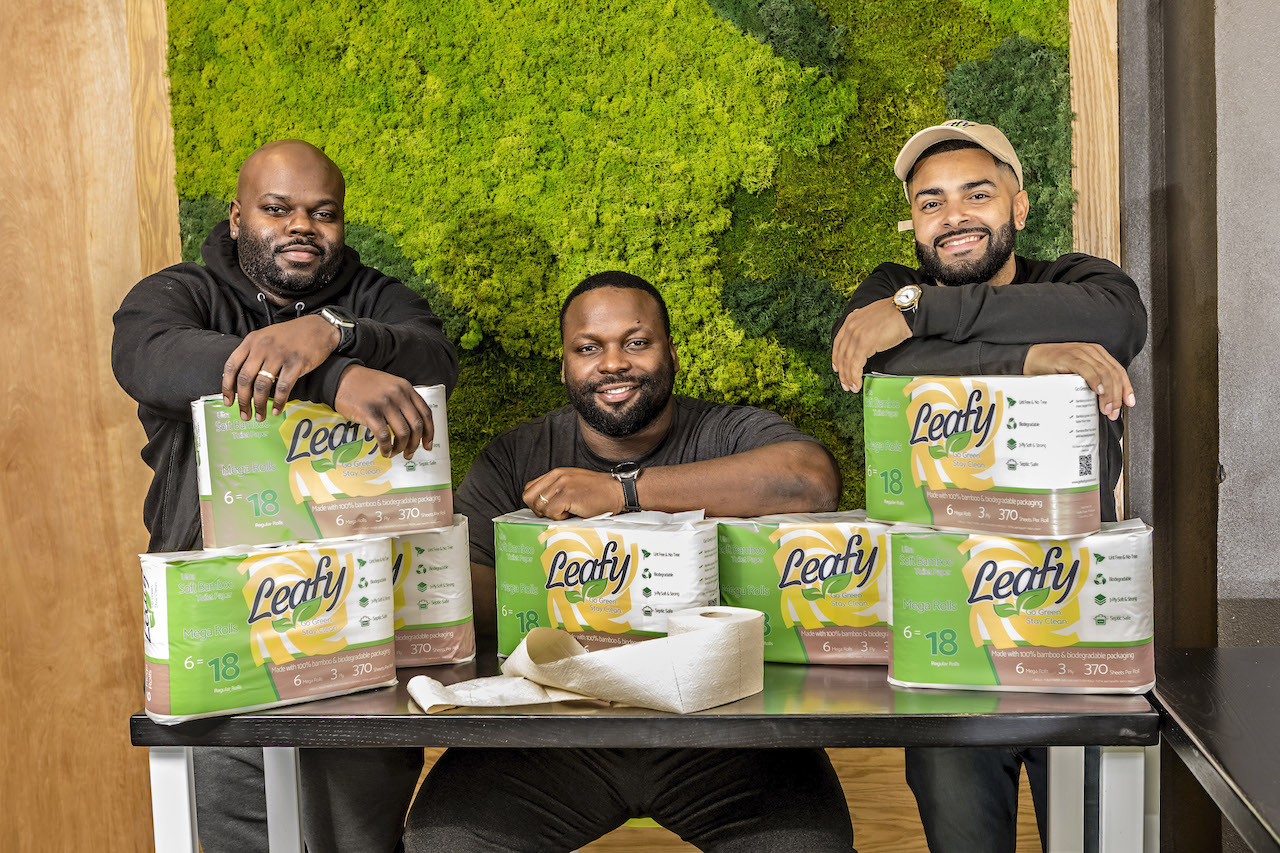 Meet Leafy, the local eco-friendly toilet paper company that’s one of the first Black-owned businesses of its kind

Exactly a year ago today, for many Americans dealing with the onslaught of the COVID-19 pandemic, toilet paper was worth its weight in gold.

And beyond all the memes and the jokes about TP hoarders (and yes, some of them were really good), this happened for a reason: Everyone needs toilet paper. So—looking to capitalize on a market that isn’t going away anytime soon—Anthony Caldwell, Troy Cherry, Marvin Green, D’Andre Martin, and Charles Peaks launched Leafy Products in early January.

“It’s an essential product; that’s one of the big reasons we started,” Green said. “But we also wanted to make something that would give back to Columbus, and something that was better for the environment.”

As its name implies, the eco-friendliness of Leafy is perhaps its largest selling point. This aspect of the product also plays a part in creating the first thing you’ll likely notice when you reach for a roll: unlike other TP, it’s not white.

“Leafy isn’t dyed, where most toilet paper is. That’s what gives other brands a white color,” Peaks said. “Leafy is also chemical-free and biodegradable, which are selling points for a lot of people.”

This isn’t the extent of Leafy’s environmental focus, either. One of the greenest parts of the new Columbus brand has to do with what it’s made from: 100% bamboo, which is considered a more stable and renewable natural resource for, among other reasons, just how shockingly fast it grows.

“A lot of trees can take over 100 years until they’re ready to be cut down,” Martin said. “But bamboo can be used in only a few years.”

Well-known as the fastest-growing plant on Earth, bamboo can often shoot up at the eye-popping rate of two inches per hour. What’s more, it actually releases 30-35% more oxygen into the atmosphere than an equivalent tree.

Outside of its eco-benefits, bamboo also offers a natural anti-bacterial agent known as “Bamboo Kun,” which is a huge plus for anything coming into contact with the more sensitive areas of your body. And while we’ll spare you most of the details on this one, due to Leafy’s three-ply construction and the natural texture of bamboo, customers have gushed over the product’s comfortable feel that’s both soft and firm.

Leafy is available in local stores such Weiland’s Market, Reuse Revolution (located in North Market Bridge Park), and Green Haven Living. Their rolls, while high-quality and environmentally friendly, are competitively-priced, with a six-pack costing $7.49 and a subscription service that saves customers 10%. Plus, all online orders receive next-day delivery to Columbus (via their own fleet of drivers).

And just like the health of our environment matters to the forward-thinking company, Leafy (which is also Ohio’s first Black-owned toilet paper company) is also concerned with real humanitarian causes.

The company is providing local jobs to delivery drivers and actively giving back to the community it came from, even if it’s only been active for three short months.

“Right now we’re looking at supporting the Huckleberry House. They have a few locations in Columbus and they work with a lot of troubled and orphaned youth,” said Green. “But we’re going to be supporting other causes too in the future. We’re looking at help for the elderly right now too, but it’s really just about what we believe in, that’s where we’ll donate to. That’s really what we’re about.”