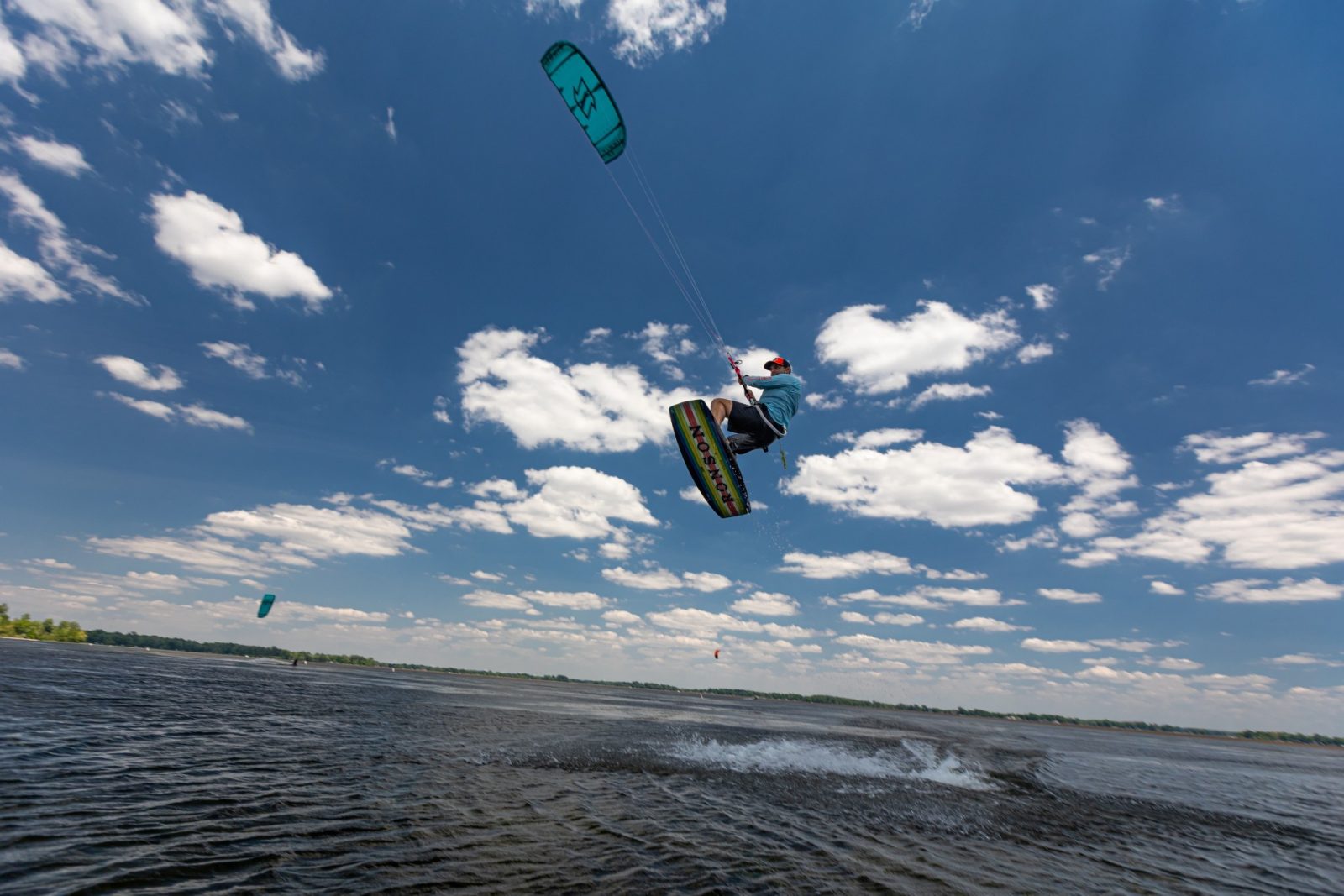 The community, known fondly as COWS for short, is part online, part real life. Its purpose is to connect local athletes who share a common love for a particular type of outdoor sport not widely practiced in Ohio, or in the Midwest for that matter: kitesurfing.

Kitesurfing was born as a variation of windsurfing in the 1990s and quickly gained popularity among exotic beach communities thereafter.

Like its older sibling, kitesurfing requires strong, predictable winds. But it calls for much less and much smaller equipment—which, according to COWS veteran Steve Burkey, is part of what has made the sport “a lot more accessible to inland, everyday folks” over time.

By the mid-2000s, kites and boards had made their first appearance in central Ohio thanks to COWS Co-Founders Ron Woodyard and Ken Claussen, who were the first to take up sail at Alum Creek.

As the pioneer kiters, they had to go through an “extensive education process” with local park officials to demonstrate the safety of the sport and earn a special vessel classification.

In those early days, the Columbus kiting community consisted of just a handful of people who stayed in touch sporadically via different online message boards. But in 2016, COWS formalized their communication with a Facebook group, which now boasts over 200 active members to date.

Within the group, kiters share celebratory videos of recently-learned tricks, offer up new equipment recommendations, and organize trips to popular kiting destinations such as Costa Rica or Hawaii. However, its primary use is for discussing the weather forecast.

“We watch the wind like sailors,” said Burkey. “And if it’s calling for anything from 15-30 miles per hour, we all pretty much drop what we’re doing and head to the lake.”

Alum Creek is the preferred local body of water given its central location and strong wind flow. But Buckeye Lake, Indian Lake, and Buck Creek are also viable options when the conditions are just right.

For those interested in taking up the sport, COWS members recommend formal training—which is still not widely available in central Ohio.

Still, the pursuit of an education could be an excuse for a vacation.

“Nearly every major coastal city in the U.S. has a kitesurfing shop,” said Stephen Newport, a COWS Facebook group administrator. “Take a trip, spend a week getting some proper lessons, and you’ll be set up for continued learning with us back here.”

The COWS community prides itself on being extremely welcoming of beginners.

“We prioritize safety and inclusion,” said Burkey. “We’re all stoked about the sport. We want to support anyone who shows interest so kitesurfing continues to grow.”

And continue to grow, it does.

Locally, kiters are always scouting new places to surf around Ohio. Globally, the sport will be featured in the Olympic Games for the very first time in 2024.

COWS members all speak very highly of the opportunities for competition and connection that kitesurfing has afforded them.

One more thing they have in common? They’re excited to see the sport finally getting the recognition it deserves.