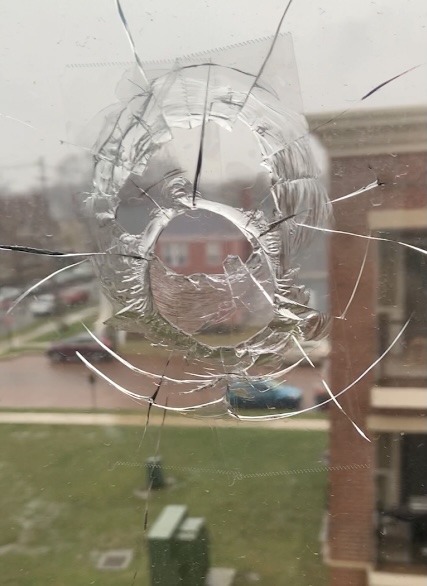 It was a mere two minutes after midnight when pieces of the east-facing window in Sarah Gifford’s German Village apartment were strewn across the floor.

“I was sitting on my couch and heard this huge crash of glass,” she said. “It took me about 30 seconds to realize what was going on.”

After finding a bullet hole in her double-paned window–and the bullet itself on the afternoon of Jan. 2–Gifford realized what had happened: A shot was fired through her window.

Gifford is an extreme example of the dangers of celebratory gunfire, which many Columbus residents reported this New Year’s Eve.

She didn’t immediately connect the incident in her home with the holiday, however. She initially believed it was intentional gunfire and the shooter had mistaken her apartment for someone else’s. After closer inspection and consultation with the Columbus Police Department, though, she learned this was likely not the case.

“My windows are double-paned, and about 30 feet off the ground, but it’s clear from the bullet holes that the shot actually came from above the height of my apartment,” she said. “The bullet hole in the first pane of glass was higher than the second hole.”

Gifford said that Columbus Police were able to tell her the bullet was from a 9 mm firearm, and that it likely traveled a mile before striking her apartment. According to BBC’s Science Focus Magazine, a 9 mm handgun can travel as far as 2,300 meters, or about 7,600 feet, just under a mile and a half.

Columbus police warned residents this year against celebrating the New Year by firing weapons. In a video posted by the official CPD Twitter account, Pastor Pastor Frederick LaMarr of Family Missionary Baptist Church said “On New Year’s Eve, we want no celebratory gunfire on that day. We know the law of gravity says what goes up, it must come down…Let’s keep our elders and our babies safe.”

Gifford believes the bullet that entered her home stopped quickly after traveling through both panes of glass, noting that it landed in a planter next to the window that was broken.”

“My Dishwasher is right by the window, my first thought was ‘What if I washing dishes at the time, it would have hit me right in the hip.’”

But ultimately, Gifford is grateful she was unharmed, and is currently working to have her window replaced.

“You can’t get too caught up thinking about what could have happened though,” she said. “You have to find the humor in it if you can, it helps.”