FLIPTURN - Warmth In The Rain Tour 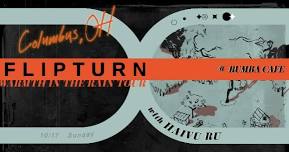 Today I'm introducing you to indie rock band Flipturn for a potential feature. The following is a short bio about Flipturn and the band's upcoming performance in Columbus, Ohio. Florida-based Flipturn

Today I’m introducing you to indie rock band Flipturn for a potential feature. The following is a short bio about Flipturn and the band’s upcoming performance in Columbus, Ohio.

Florida-based Flipturn will be stopping by Rumba Cafe on October 17 on the group’s Warmth In The Rain Tour! For this show, the band will feature support from Haiva Ru. The nights in Gainesville, Chicago, Orlando, Dallas, Los Angeles, Salt Lake City and Atlanta are already sold out with low ticket warnings in several other cities. With undeniable chemistry and innate talent, Flipturn turns their live performances into fully immersive and unforgettable experiences that energize crowds and allow for a total release of inhibitions.

Since forming in 2015, the indie rock group from Fernandina Beach, FL has gained a wide national following. With over 30 million streams and over 500,000 monthly listeners on Spotify, the band has shared the stage with nationally recognized touring artists including Mt. Joy, Saint Motel, Japanese Breakfast and The Happy Fits. The band credits much of their success to their early years of performing and recording in Gainesville, when several of the band’s members were students at The University of Florida.

Flipturn is open to any interviews and coverage for the band’s tour! Please let me know if you are interested and I can email over the tour press release, band bio and photos.