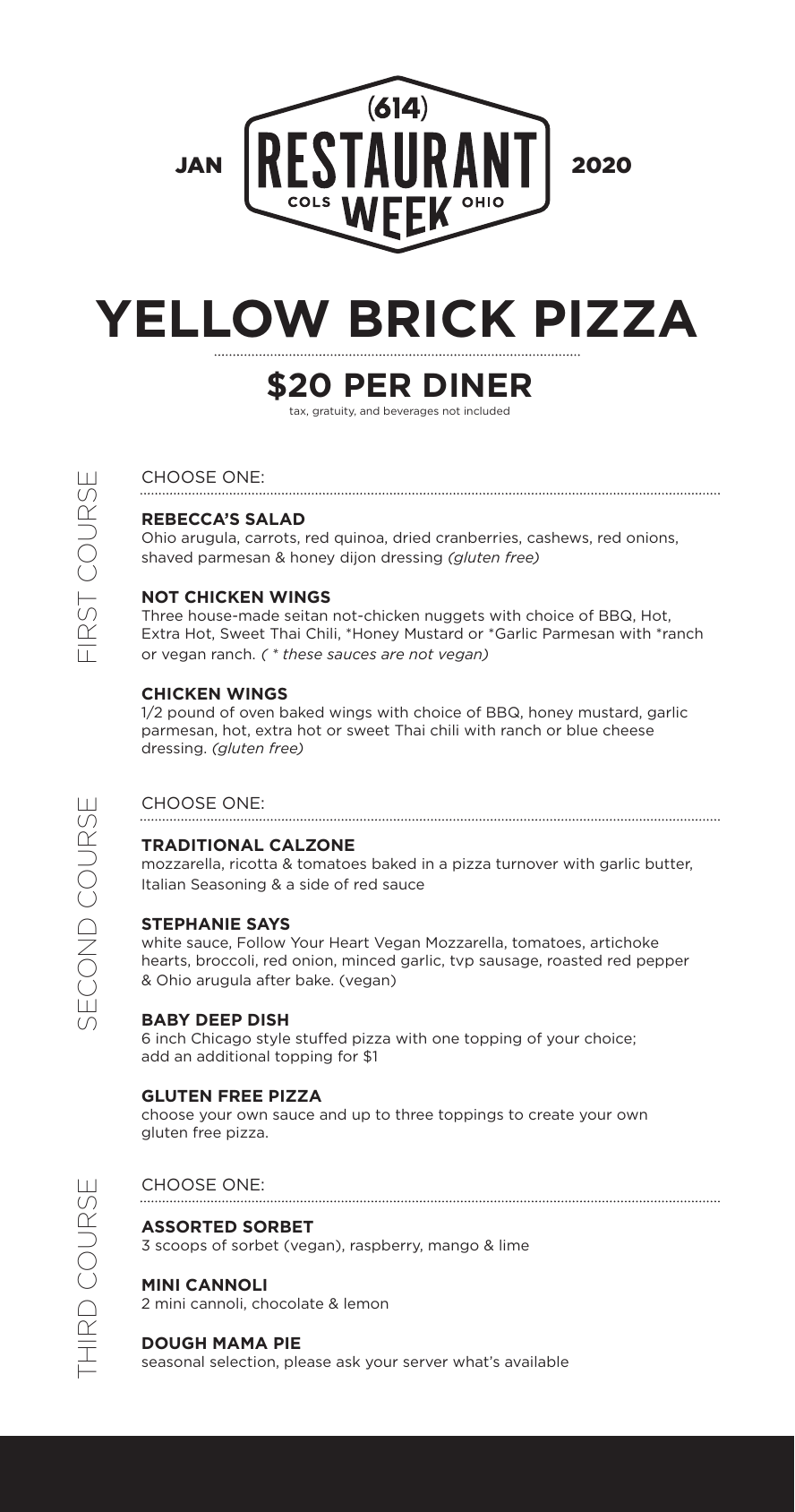 Monday – Saturday: all hours of operation during restaurant week

Prix Fixe menu not available for carry out. Dine In only.

The bleak isolation of the COVID-19 quarantine caused a mental block for many creatives. But for recent Columbus College of Art and Design graduates and visual artists LaShae Boyd and Kayneisha Holloway, the time and space only helped to enrich their craft.

Their post-grad artistic pursuits were especially sharpened during recent Columbus protests, as thousands of Central Ohioans joined together throughout the month of June to commemorate the lives of George Floyd, Breonna Taylor, and numerous other Black Americans killed by police. The most recent of which was the death of Floyd on May 25, who was killed by excessive force to his throat by Minneapolis, Minn., police officer Derek Chauvin. Chauvin is charged with second-degree degree, third-degree murder, and second-degree manslaughter. Three other officers on the scene are charged with aiding and abetting.

For both Boyd and Holloway, they hope that the growing Black Lives Matter movement sparked by Floyd’s death translates into further local opportunities for Black visual artists.

With a pop-surrealist focus, Boyd’s paintings are traditionally distorted and shadowy, which she attributes to the theme of chaos. When the pandemic became widespread, Boyd committed her time in quarantine to hold a daily creative process, whether it meant sketching or painting on full canvases. In turn, Boyd executed her goal, tackling more than one piece each day and later painting a mural commissioned by Maroon Arts Group.

“I wanted to represent Black people in a higher light. A lot of my work has to do with spiritual transformation within myself, so I wanted to push this further specifically highlighting black magic and the power we possess as a whole,” Boyd said of creating the mural during protests. “I think we should start taking this energy to neighborhoods of lower classes, the areas with less income and support, and fill it up with art. Art can raise awareness and infuse the community with love and unity.”

In a similar vein, Holloway embarked on taking multiple commissions earlier this year after being furloughed from two positions  during economic turmoil while finishing her degree. The multi-dimensional artist and interior architect caught up on meditating and reading to decompress from the heaviness of the pandemic. Once revived, she set off to the Greater Columbus Arts Council, where she was joined by other visual artists who encouraged her to share her thoughts on Floyd’s murder.

“The word ‘empathy’ came to mind; that’s the only word I could think of since the first night of protests in Minneapolis,” Holloway said, later creating murals at Snap Fitness on Hubbard Avenue and the Huntington Center. “The silver lining is that this revolution is pushing me to become a full-time freelance artist, even [an] activist, which I would like to embrace more.”

Prior to completing their studies at CCAD, Boyd and Holloway’s senior thesis seemed to foreshadow the current social climate in proximity to their core audience, even expanding their message to local government officials. Though Boyd initially lacked confidence, which transmuted into her work as a student, she soon transformed through her thesis titled “Out of Control,” previously showcased at Beeler Gallery on the CCAD campus.

“It was a group of paintings and photos on the topic of finding self through the unconscious, using dreams as a guide back to repressed memories and personal truth,” she said. “With everything going on, it’s elevated my understanding of my position as an artist in society. I started thinking about how art not only is a great way to communicate difficult emotions but it’s literally like a time machine that you can explore.”

Art can raise awareness and infuse the community with love and unity.

Being a first generation college graduate, Holloway’s thesis analyzed the consumption of public art through murals and placemaking implemented into Columbus neighborhoods. Though she worked solo as classes went remote due to the quarantine, she attributes her pride as a muralist to studying interior design and architecture during those four years.

“I did feel relieved to not have to worry about submitting an assignment online, but I didn’t feel I accomplished much outside of my grades and received my diploma through mail,” she said. “Attending classes remotely set my creativity and drive back a little because I liked the environment I was working in. I especially miss doing ceramics, which is impossible to do remotely when your art studio is also your bedroom, laptop, or phone.”

Still, Holloway was able to put finishing touches on her thesis dedicated to revolutionary artists who have used their proximity to local people to acknowledge and create space for those who have been disadvantaged. Those who inspired Holloway’s work included Stephanie Rond, Rick Lowe, Tyree Guyton and Aminah Robinson—whom she painted at the Ohio State Rotunda.

“On a community level, I hope every person as a whole will acknowledge themselves as worthy of living, and simultaneously will view their community members’ lives as worthy, without the role of police officers and authorities,” Holloway said. “On a political and economic level, I hope that our politicians, city council members, and city planners will acknowledge that Black people, regardless of class, lives matter; their health matters, their education matters, their neighborhoods and homes matter, and their safety and security matters.”

Disappointed when being unable to walk the stage at graduation due to social distancing, Boyd celebrated safely at home and hopes that recent community art pushes collective exposure for Black women.

“I hope that we can see the reasons why murals are so important outside of the aftermath of the rioting that was going on,” she said. “I want to make pieces speaking on what’s happening, keeping in mind that this is a piece of history [that] future generations can look back on and learn some of the events that structured their present.”

Noting the magnitude of male artists in Columbus, Holloway obliges with Boyd’s sentiment, aiming for Black women artists to receive their roses while they can still smell them.

“We need to embrace change and differences—I haven’t seen many Black women artists being celebrated as much who are still living,” she said. “I think allowing Black women the space to develop their voices as well as express their voices and concerns is a step to support Black women and artists, even if their message is very different from what we normally hear and see.”

COSI will not reopen today as hoped.

After making plans at the end of June to reopen this week, COSI has made the difficult, yet cautious, decision to delay welcoming guests back in its doors.

You can read a statement provided by COSI below:

“After careful consideration of the current COVID-19 situation in Franklin County, COSI has made the difficult decision to delay its planned reopening. COSI has undertaken this action out of concern for the health and safety of its Members, Guests, and Team. The Ohio Public Health Advisory Alert System currently ranks Franklin County as an Alert Level 3, indicating a very high exposure and spread of coronavirus, and the State of Ohio has announced that Franklin County is currently approaching Alert Level 4. COSI will continue to monitor the situation along with state and local health officials.”

Statement from COSI on Wednesday