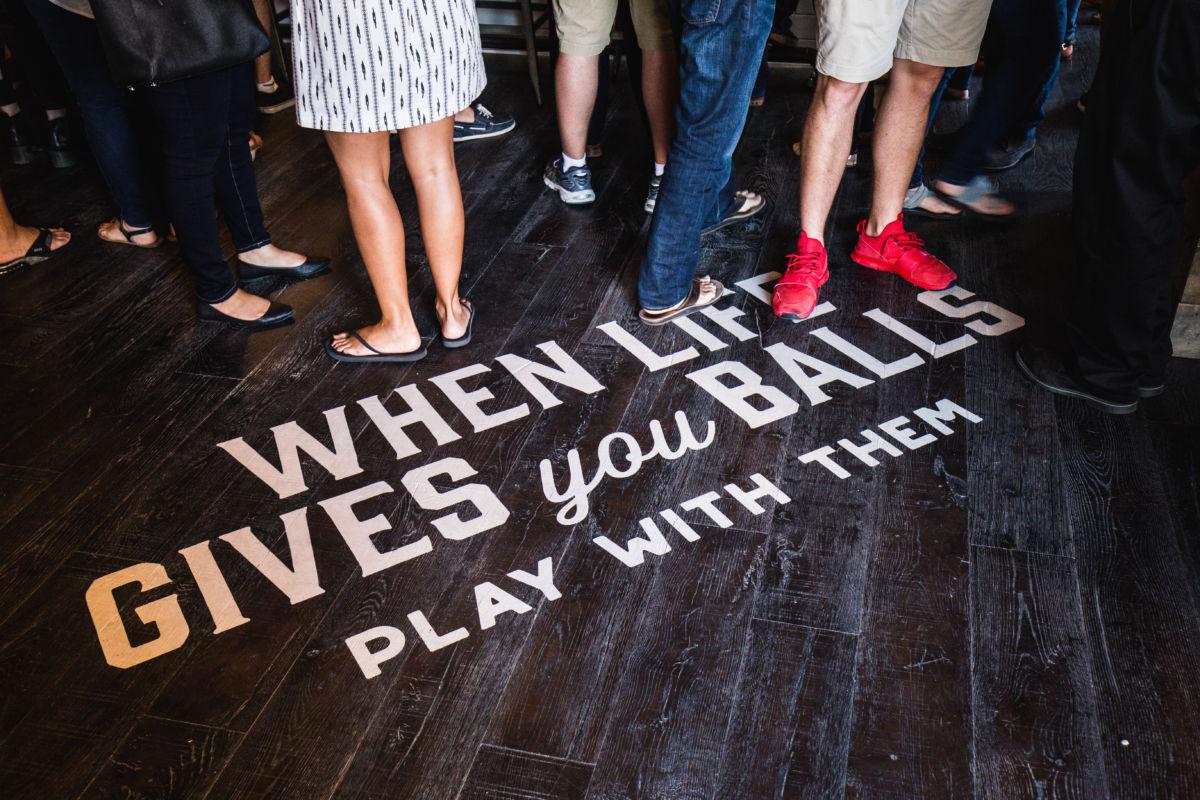 It’s quite alright if you’ve never heard of The Sidekicks until now. Once Runners in the Nerved World, the band’s infectious fourth album, drops later this month, they’re all you will be talking about in 2015. But it’s no fault of The Sidekicks that they’ve flown deep under the radar of Columbus audiences, as they’ve been a “band” in the truest sense—endless tours, a rich discography, ample pedigree—since Steve Ciolek and Matt Climer found a bond at a Cleveland high school in 2005.

But changes were imminent. Though the idea of The Sidekicks may have sprung from a teenage dalliance, what they represent now is evolution—growing up without growing up, or merely doing a switcheroo on punk-pop. Compare Runners with their teeth-cutting debut, So Long Soggy Dog, and you’d be hard-pressed to attach the “punk” to the latter. You’d be hard-pressed to even call them the same band.

“Stepping stones” is how drummer Matt Climer describes the upward trajectory of Sidekicks in the last few years. First it was sleeping on floors during house-show tours, gaining a devoted crowd the old-fashioned way, then it was opening for bands like the Gaslight Anthem and Against Me! in Newport-sized clubs; now, they’re strategizing how to crisscross America as headliners signed to the fabled Epitaph Records.

While still putting out new records for punk heavyweights like Bad Religion and Rancid, Epitaph have, in the last few years, shifted with the times, culminating in releases by bands more in tune with the do-it-yourself pop wave of kids who grew up ingesting everything from NOFX to Built to Spill. Runners in the Nerved World, The Sidekicks’ first album for the label, is emblematic of Epitaph’s newfound glory.

Songs like “Deer” and “Jesus Christ Supermalls” are buoyant, melodic anthems, rich with harmonies and elongated hooks, but the once omnipresent sarcasm and thrifty ethos of “punk” are embedded under the surface. It still, above all, retains the bouncy immediacy of their past.

“We’ve played a lot of punk shows and toured with punk bands for so long. I found myself so jaded with the trends in punk,” says Ciolek of Runners’ obvious progression toward pop songs. “I want us to be a band that you can go see at a house show and then take home a record that’s really poppy.”

Indeed, these days The Sidekicks have more in common with Saintseneca (who Ciolek has spent the last year playing with) than something that might play to a Bernie’s crowd on a Tuesday night. Much of that increased fidelity and those giant riffs are thanks to the hands of famed producer Phil Ek, who recorded Runners during a six-week stint at his studio in Seattle earlier this year. It was another perk of their fruitful relationship with Epitaph. The demanding Ek has engineered heralded records by the likes of The Shins and Fleet Foxes, and his work with the Sidekicks was no different, pushing the band through endless takes to bring out the best performance. To call it grueling would be an understatement, but the rewards are as expansive as Ciolek’s theory on what Runners represents in his own artistic transmutations.

“The record is sort of about the inertia of post-growing up and those experiences you gather along the way. It’s about trying to keep moving through that in some way,” says Ciolek of the album’s overarching themes. “I feel like a lot of the songs are about trying to simulate that movement, but eventually ending up where you began. There are references to drinking and maybe trying to chemically enhance your brain, but when you wake up in the morning you’re in the same spot. It’s about being aware of your mortality. Time is going to keep going.”

The Sidekicks will celebrate the release of Runners in the Nerved World with a show January 29 at Ace of Cups. Visit www.sidekicksohio.tumblr.com for more information.

To honor the memory of George Floyd and fix the injustices surrounding his death, the music industry has designated Tuesday as a time of pause to collaborate on ways to better support the black community.

The message that circulated around social media quickly on Monday stated that “Blackout Tuesday” is being used as “a day to disconnect from work and reconnect with our community” and “an urgent step of action to provoke accountability and change.”

The movement has been gaining momentum under the hashtag #TheShowMustBePaused. Major labels such as Capitol Music Group and Warner Music Group announced their alignment with the “Blackout Tuesday” cause.

Companies have also announced practices such as pausing social media activity throughout the whole day.

Spotify and ViacomCBS have already announced an 8 minute and 46-second moment of silence for Tuesday. The time reflects how long the Minnesota police officer dug his knee into the kneck of Floyd.

Can’tStopColumbus took a quick pause when the pandemic shut down the world and asked two questions:

Our elder community was one of the major demographics to have stricter socially distancing guidelines suggested to them. Holidays and birthdays went by without hugs from grandpa or grandma’s cookies.

Out of the need to fill that missing love in the life of American seniors, the idea of Curbside Concerts was born. Anyone is able to jump on the Curbside Concerts signup page and request a concert for an elder, sick people not able to leave the house, or a simple celebration.

Sending a concert telegram is free, and you can also leave a message for a loved one and suggest what type of tunes the organization-selected Columbus-area musician.

So far, the feedback has been inspiring.

“People cried. I cried. We cried. It was beautiful,” said Zach Friedman, one of the service’s founders and creators. “We had a powerful idea on our hands, and the amazing power of the #Can'tStopColumbus community to scale it and bring it to life.”

To date, Curbside Concerts has had over 50 volunteers. Their job is to drive around a Columbus musician and their equipment with trucks provided by Ricart Automotive. It’s a road trip around the Columbus area, delivering concerts to those who may just need their spirits lifted. It’s like a non-depressing version of Inside Llewyn Davis.

Support has come from all ends of the Columbus creative community, including The Columbus Foundation, Greater Columbus Arts Council, Streetlight Guild, and What? Productions. Through these organizations, musicians are able to be paid for a route that usually lasts five to six hours. 100 percent of the donations they receive on their route also goes to the musicians.

Friedman is asking people to keep requests to older audiences.

“Working with local musicians to perform curbside at people's homes is the vehicle or medium, but the real thing we are doing here is connecting those to older people they love, with an authentic and emotional experience to send love over,” Friedman said.

We found out pretty quickly how much as a collective that we take live music for granted. Live streams have been a temporary, dulled-down replacement. You realize how long people have been robbed of the experience when you see a musician pull up in a pickup truck, set up in five minutes, and serenade neighborhoods with songs like “Lean on Me” and “What A Wonderful World.” It starts off with a message to one house and then resonates down the street, like the citizens of Gas Town rushing to The People Eater for even a drop of water.

For most people, it was their first taste of live music since mid-March. While we may want concerts to return as soon as possible, its productions like Curbside Concerts that display the emotional power of music.

To request to send someone a concert, follow the link here: https://sendaconcert.herokuapp.com/request

To volunteer for Curbside Concerts, follow the link here: https://www.signupgenius.com/go/9040b45abaa22a4fb6-curbside