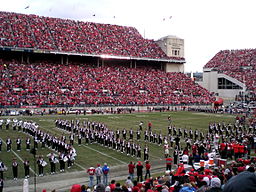 Former Buckeye coach, Earle Bruce, will be dotting the “i” in the Script Ohio performance during Ohio State’s homecoming game this weekend.

This comes as a way to honor Bruce for his service to OSU and support of the marching band, according to the Columbus Dispatch. Bruce is the second former coach to the dot the “i,” the only other one being Woody Hayes.

According to the Dispatch, Bruce is part of the College Football Hall of Fame and coached the Buckeyes from 1979-87. Current coach, Urban Meyer trained under Bruce as assistant for the Buckeyes back in the 80s.