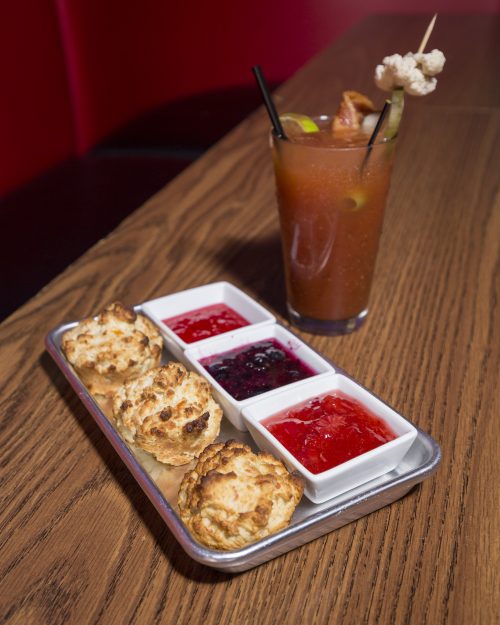 You get some eggs, a choice of meat, a style of potato, and if you’re lucky, the option of chocolate chips in your pancakes. It all usually kind of blends together, tastes more or less like the greasy griddle it was cooked on, and probably smells overwhelmingly of salt.

That said, I found it surprising that Hamptons on King—the dimly lit bar known for their stellar patio and cheap drinks—actually got me excited about brunch again. To be fair, Hamptons have been boasting a reputable lunch for sometime, so it was only natural for them to throw their hat into the brunch ring.

In order to give the bar an edge on the Columbus brunch scene, Hampton’s owner Matt McLeod wanted to do something different: breakfast sushi. If you are like me, you are picturing seaweed, eggs, and raw fish. It’s not that, I promise. Imagine bite-sized breakfast portions, like a miniature twisted cinnamon roll or a couple of eggs wrapped in bacon on a tiny piece of toast. Yeah, that’s more like it.

“I’ve personally never seen breakfast sushi done at an actual restaurant or anything—I’ve just kinda seen people do it on the Internet. I thought it looked good, and ended up playing around with it. It tasted great, and it was kind of what I thought we should have as one of the focuses.” 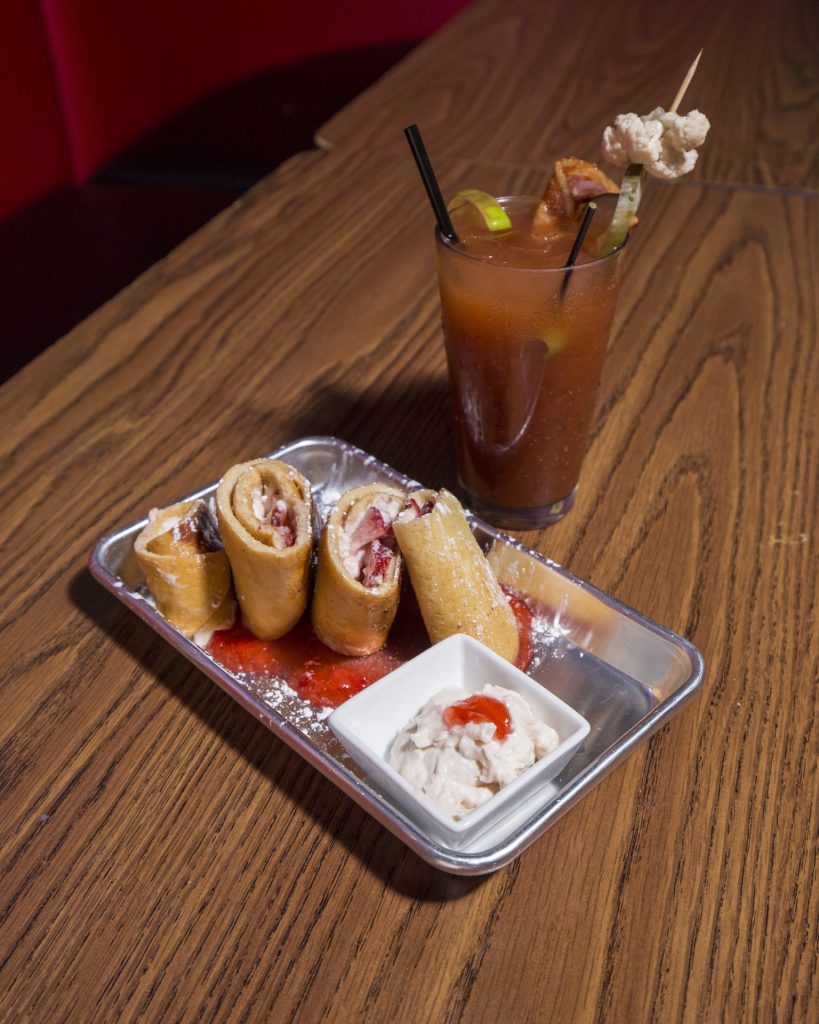 The fun take on breakfast is piloted by Desmond Calhoun, sous chef and man in charge of Hampton’s menu. In addition to his Detroiter grandmother Dotty’s secret biscuit recipe, his approach is pretty simple.

“First things first, I need fresh stuff. What a lot of people don’t know that fresh can actually be less expensive than buying things with preservatives. And no microwaves.”

As a member of the brunch serving elite, I know all too well that the deployment of GFS trucks and microwaved food is, well, the norm. “I can taste a microwave. People can taste if is has been half-assed,” he assures me with a laugh as he hands off my first plate. First up is the B.E.A. Roll: scrambled eggs, bacon, and avocado stuff the shell of a flaky crescent roll, making for a bite-sized delight to dip into the housemade pico de gallo. As promised, the ingredients are on-point, the eggs pasture-raised at Copia Farms, a family homestead in Johnstown, Ohio.

And of course, the brunch menu is only as good as its bloody mary—and theirs has plenty of housemade goodness, too—from the hot sauce in the glass to the buffet of pickled vegetables and candied bacon atop it.

It was savory sushi for the main course, and the sweet Strawberry Roll for the palate cleanser. Thinly sliced strawberries served in a strawberry cream-stuffed, tightly rolled, vanilla pancake, it’s light and fluffy, and packs away nicely on the hot summer morning.

Well, fortunately for me, the food kept coming. Dotty’s Biscuts. Homemade Jam. (Three kinds!) Grits with avocado. Fried chicken with pork gravy. I don’t remember much of what happened during this time, but I do know that it eventually involved heavy waddling. After a few strong drinks and a couple empty plates, I napped the rest of my Sunday away, belly full of a renewed faith in brunch.

The new brunch menu at Hampton’s on King (234 King Ave.) is available until 2 p.m. Saturday and Sunday.